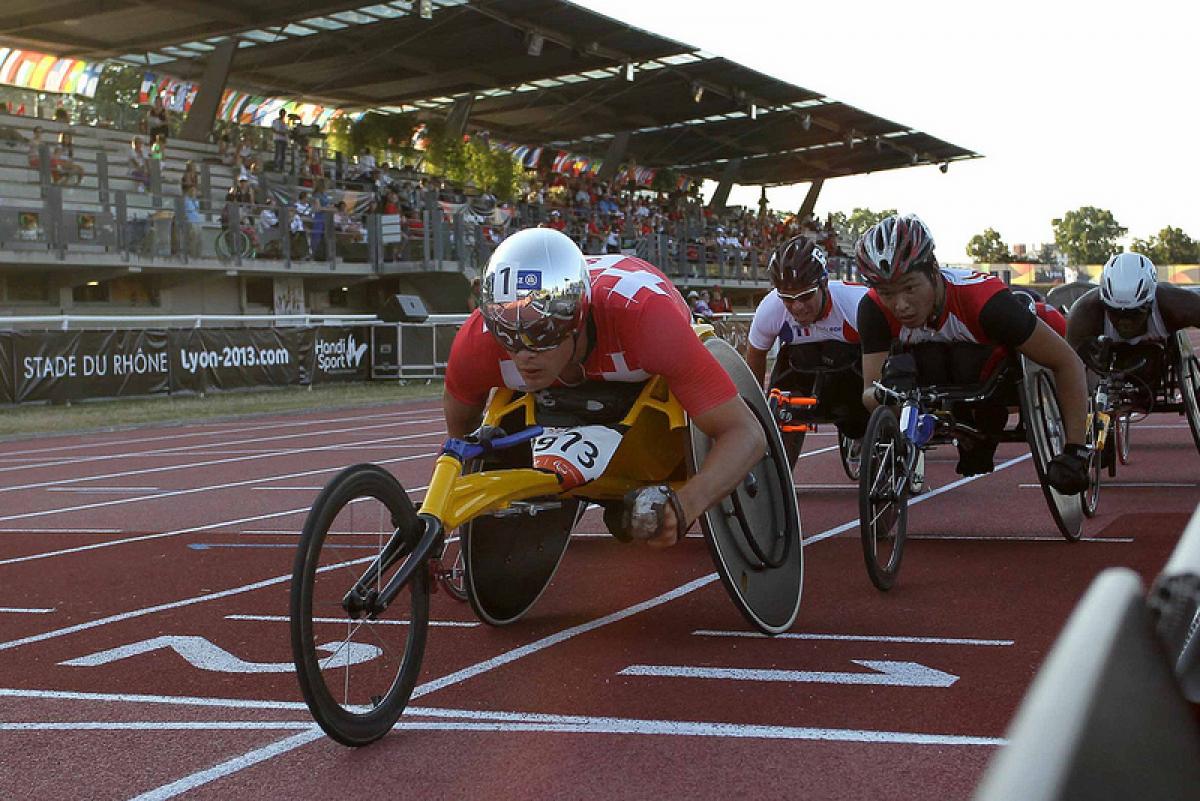 "I am very happy. I did the perfect race and reached a good top speed. It was my first competition so I had to save some energy for the coming ones. I feel confident for the next days."

Marcel Hug clinched his third consecutive 10,000m T54 title on a thrilling first afternoon of action at the IPC Athletics World Championships in Lyon, which saw four world records falling in the field.

The Swiss ‘silver bullet’ cruised home in the last 100m to take gold in 23:04.75 minutes, well outside his own world record, but ahead of Sho Watanabe of Japan, and Jean-Paul Compaore of Canada.

Hug, who races in no fewer than six World Championship events, said: “I am very happy, I did the perfect race and reached a good top speed. It was my first competition so I had to save some energy for the coming ones. I feel confident for the next days.”

The 20-year-old reigning Paralympic and world champion made it look easy as she led round the bend and pushed home well clear of the field to retain the title she won two years ago with a championship record time of 31.78seconds.

“I was favourite with no great challenge,” said Cockroft. “However it was a bit harder today with the heat and the rivals improving. I want to keep on going breaking records and winning medals.”

“I felt great it was a shiny day for me and America but a little bit too hot. I did a pretty good race and I feel quite confident for the upcoming races,” said Martin.

America’s Jarryd Wallace threw down the gauntlet in the men’s 200m T44 semi-finals, setting a new world record of 22.32 seconds despite easing up over the line ahead of fellow American – and former world record holder - David Prince. 2011 world silver medallist Jerome Singleton secured America’s third spot in what promises to be an electrifying final with a win in his semi-final.

Fellow American Tatyana McFadden also kicked off her World Championship campaign in great form, qualifying for the final of the women’s 200m T54 with a personal best of 28.41seconds, well ahead of the field. McFadden’s younger sister Hannah finished second, whilst teammate Cheri Madsen won her semi-final with a personal best.

McFadden also made it through to the final of the 5,000m T54, winning her semi-final in 12:07.60 minutes, whilst Switzerland’s Manuela Schaer headed the field in her semi-final in championship record time, joining a final line-up that includes her compatriot, Paralympic champion Edith Wolf.

In the men’s 200m T13 Ireland’s double Paralympic champion Jason Smyth (21.57) made clear his intentions as he clocked the fastest time of the three semi-finals. The Irishman won the world title in 2006 but missed the Championships in New Zealand two years ago with injury. He’ll be hard to beat in Sunday’s final.

In the men’s 200m T11, Namibia’s Ananias Shikongo continued his winning form from the morning with victory in the first semi-final, whilst Brazil’s defending champion Lucas Prado of Brazil eased through in his semi-final. His countryman Daniel Silva and US athlete David Brown qualified as fastest losers.

China’s Lisha Huang and America’s Angela Ballard won 200m T53 gold and silver respectively at the Paralympic Games last year and they continued their run of form in Lyon, with straightforward wins in their semi-finals to secure a place in Sunday morning’s final alongside six other athletes.

Seven medals were decided in the field this afternoon, and the first world record of the 2013 World Championships went to Ukraine’s Paralympic champion Roman Pavlyk in the men’s long jump F36.

The 29-year-old bettered his previous world record set back in 2005 by 11cm, with an opening jump of 5.44m - enough to secure gold. Silver went to Poland’s Mariusz Sobczak, whilst his compatriot Marcin Mielczarek took bronze.

“I feel really happy to beat the world record I set eight years ago, it is a great performance,” said Pavlyk.

Not to be out done, Maciej Lepiato of Poland broke his own world record in the F42/44 high jump, clearing 2.13m to take gold ahead of Great Britain’s Jonathan Broom-Edwards.

“It's a very good day for Poland and for me winning a gold medal and breaking a record is fantastic,” Lepiato said. “Each first attempt was a success, I am in very good physical condition. The competition with Jonathan Broom-Edwards is hard but I have been stronger this time.”

In the women’s shot put F58, Mexico’s defending champion Angeles Ortiz saved her best until last with a final throw of 11.43m to retain the title she won in New Zealand. Ortiz’s throw was a new Championship record, just three centimetres ahead of Bulgaria’s Stela Eneva, with Algeria’s Nassima Saifi winning bronze.

“I was not sure to win until the very end, nothing was won in advance, I am glad because the training was so intense,” said Ortiz.

“We will keep on training harder and harder. I dedicate this victory to my daughter who celebrated her birthday yesterday.”