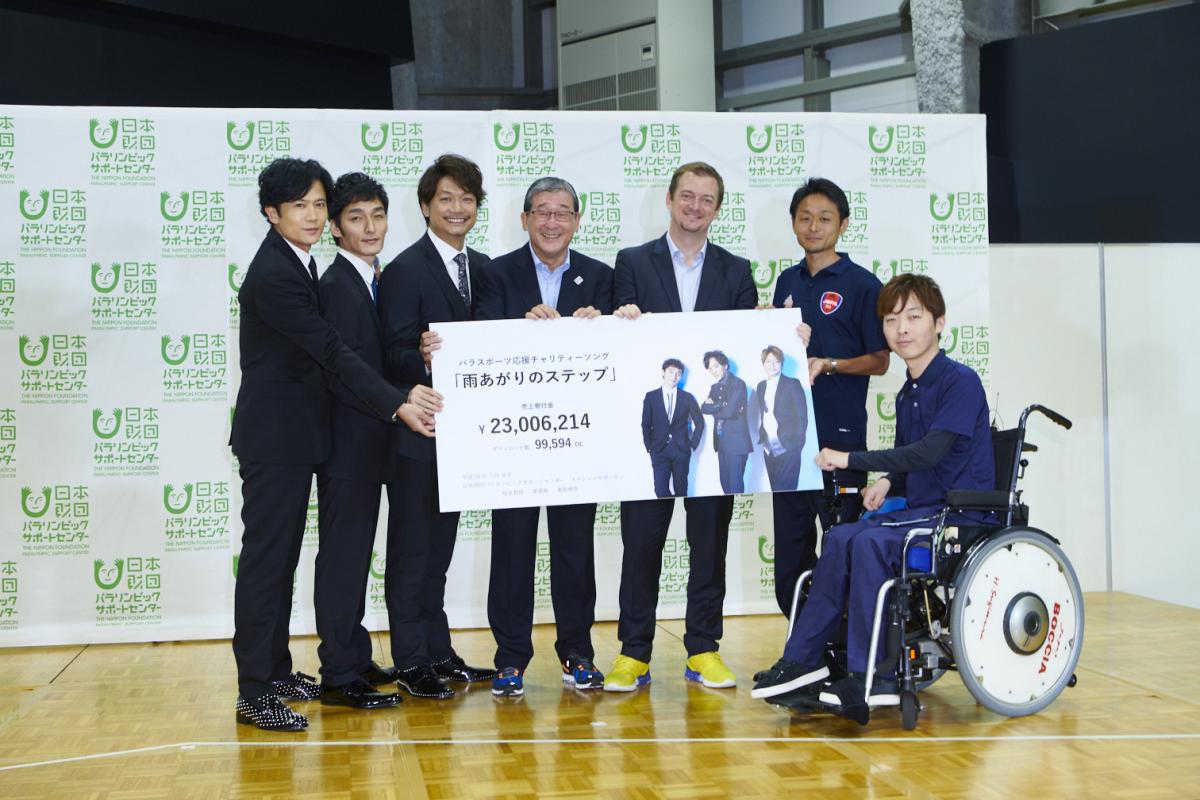 The ceremony counted with the presence of IPC President Andrew Parsons, the Chairman of Parasapo and IPC Governing Board member Yasushi Yamawaki, Eigo Matsuzaki (General Secretary, Japan Blind Football Association) and Hidetaka Sugimura (Rio 2016 Paralympic silver medallist in boccia). They received the cheque handed over on stage by Inagaki, Kusanagi and Katori.

"Ame Agari no Step" was composed by Yoko Kanno, written by Tetsuro Aso and co-created by Warner Music Japan. The charitable sale period was set between 19 March and 30 June with a total number of downloads of 99,594 and a total sales of more than 170,000 Euro.

"Some of this donation will be used outside of Japan through I’mPOSSIBLE. This will engage and educate young children through Para sports and Para athletes. This programme will help change children’s attitude toward persons with impairment. They are the decision makers of our future. Through education, we can change the society. More kids, more people around the world will get to know the Paralympic Games. We are lucky to have high profile artists and their large fan base helping to change the future.

"I want all of you to enjoy the Games. I am hoping to say at the Closing Ceremony of the Tokyo 2020 Games that Tokyo 2020 has been the best Games ever."

"It is 779 days to go until the Tokyo 2020 Games. We are aiming to fill the entire venues and to create an inclusive society together with the Special Supporters and Para sports fans.

"I believe some of the victims who are suffering from the torrential rain in Western Japan now are the supporters of this charity song. I can only imagine the hardship you suffer, but we are as one so please take care. We are grateful to know that our donation will be used for the Paralympic Education program for the children around the world.

"I went to PyeongChang in March and witnessed the Paralympic spectacle with my own eyes. I met IPC president Mr. Parsons and we talked about [how] to fascinate and engage young generation to the Paralympics. I am very excited to know that our donation will help to make the conversation become reality through the promotion of the Paralympic education worldwide."

"Please inspire many young children and share the 'wow!' feeling that I felt at the Games."

After the ceremony, Mitsuteru Murakami, the head coach of the Japanese boccia team for the last two Paralympic Games explained the rules of the sport and Rio 2016 silver medallist Hidetaka Sugimura made a demonstration. Then all three Special Supporters, IPC President Andrew Parsons, Yasushi Yamawaki and Hidetaka Sugimura were divided into two teams and played boccia.