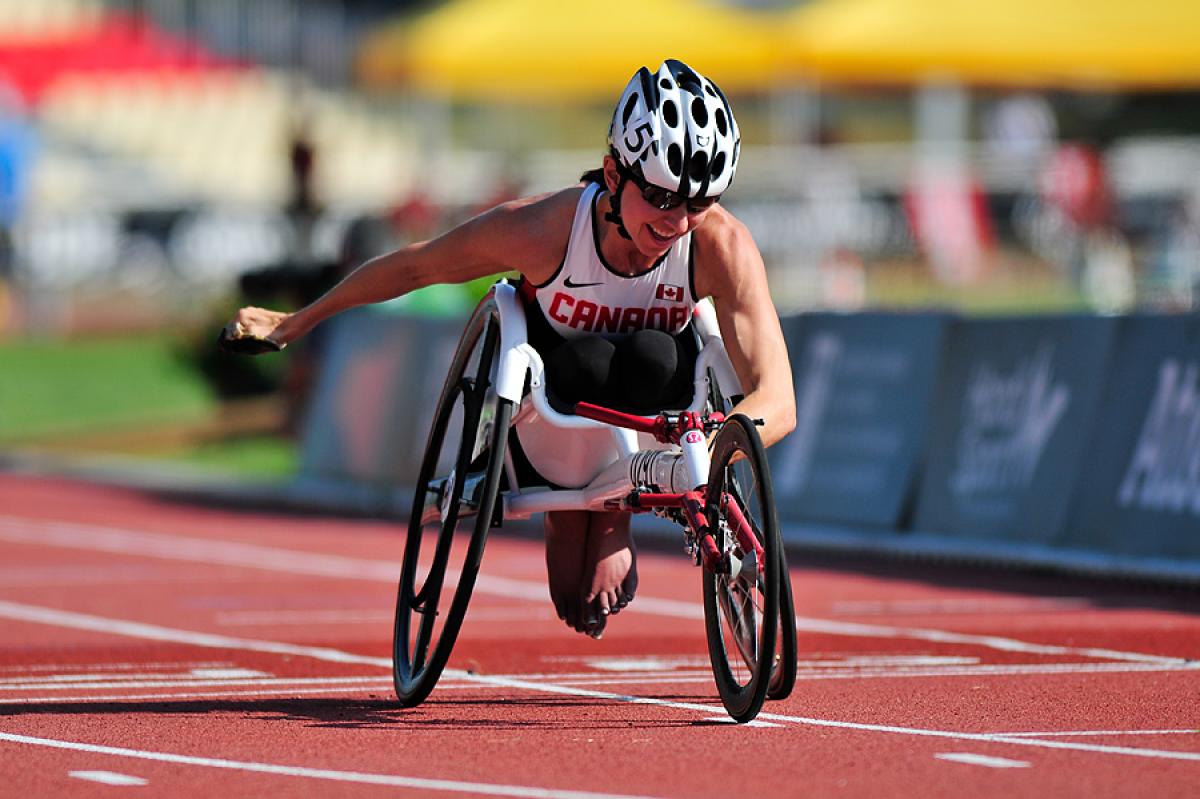 Hayes, competing in her fourth World Championships, leapt 5.76m in her opening jump to better the previous championship record set by Anthi Karagianni in 2006 by almost 20cm.

Six gold medals were decided in the field in the morning session of day six at the IPC Athletics World Championships in Lyon, France on Thursday (25 July), with South Africa’s Paralympic long jump F13 champion Ilse Hayes smashing the championship record to secure her country's second gold at the event.

Hayes, competing in her fourth World Championships, leapt 5.76m in her opening jump to better the previous championship record set by Anthi Karagianni in 2006 by almost 20cm.

The world record fell in the women’s javelin F54/55/56, as Tunisia’s Hania Aidi (F54) sealed gold with her final attempt of 18.32m (1,035 points) to retain the title she won in 2011. Silver went to Liwan Yang of China with South Africa’s Ntombizanele Situ taking bronze.

In the women’s javelin F12/13, Anna Sorokina bettered the championship record three times, culminating in a final throw of 39.75m to seal gold for Russia ahead of Austria’s Natalija Eder ad Ya-Ting Liu of Chinese Taipei.

Poland’s Tomasz Paulinski took gold in the men’s shot put F35, the only competitor throw beyond the 10m mark. With 11.11m in his sixth attempt, Paulinski took gold over a metre clear of Alexis Jose Paez of Venezuela, whilst Michal Glab ensured there was another podium finish for Poland as he threw a personal best for bronze.

Russia's Alexey Ashapatov continued his domination of the event he won in New Zealand and London, adding to the discus title he retained earlier this week with victory in the shot put F58. The 39-year-old threw 15.41m.

Canada’s Michelle Stilwell won the re-run of the women’s 800m T52 final after Wednesday's upset when Belgium’s Marieke Vervoort and 2011 silver medallist Stilwell collided as they led shoulder to shoulder with 200m to go.

This time, Stilwell made no delay in taking the race on from the gun, proving too fast for America’s defending champion Kerry Morgan, as she pushed hard with 250m to go to secure gold with a new world record, clocking 2:14.79.

Morgan and Cassie Mitchell picked up silver and bronze for the USA, respectively.

Iran’s Peyman Nasiri Bazanjani retained his title in the men’s 1,500m T20, holding off a challenge by the man who took silver behind him in London, Daniel Pek.

The Polish athlete tried hard to overtake the Paralympic champion round the final bend but, with a glance over his shoulder in the last 30m, he realised he had to settle for second place, as Nasiri Bazanjani cruised to a comfortable win.

And in the morning’s other one-lap event, the men’s 400m T37, Australia’s Brad Scott looked in superb form. The 25-year-old will be hoping to add to the 800m T37 silver he won on Sunday (21 July) come the final on day seven.

Germany's Heinrich Popow set a championship record (12.31) as he crossed the line first in the opening semi-final of the men’s 100m T42, after leader and world record holder Earle Connor of Canada tripped and fell less than 20m from the finish. Popow’s big rival, Scott Reardon of Australia, led the qualifiers from the second semi-final.

Canada’s Brent Lakatos has already won two gold medals so far this World Championships, and the 33-year-old continued his great form cruising through to the finals of the 100m T53 with a championship record time (14.58), whilst Brazil’s Ariosvaldo Silva set a personal best as he led the qualifiers in the second semi-final.

And Finland’s Leo Pekka Tahti showed he’s out to make amends for his 200m T54 defeat to Kenny van Weeghel of the Netherlands, clocking a championship record 13.76 in the first semi-final. Van Weeghel rounded off the session in style too, laying down his marker in the second qualifier, just 0.08 seconds shy of his rival’s mark.