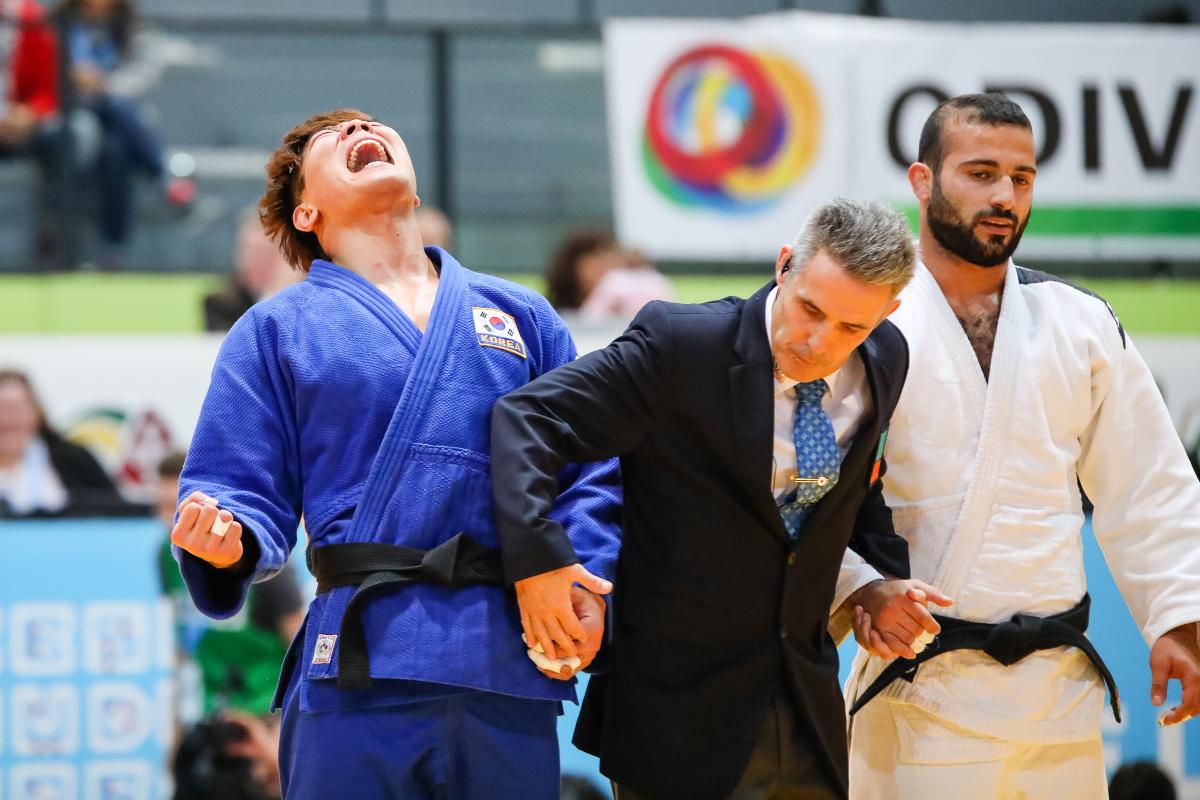 “At the beginning of the match I lost a point. I was nervous and stressed but at the end of the day is a good result.”

South Korean judoka were the stars of the show at the 2018 Judo World Championships in Odivelas, Portugal, on Saturday (17 November) winning two of the seven golds on offer.

Jung Min Lee overcame Azerbaijan’s Huseyn Rahimli in the men’s -81kg, despite carrying a knee injury. It was gold for the South Korean on his World Championships debut.

“I had a serious knee injury but after I recovered, and with this being my first major tournament, I am so happy for winning the gold medal,” Lee said. “At the beginning of the match I lost a point and I had two shido. I was nervous and stressed but at the end of the day is a good result.”

The golds for Min Lee and Lee Jin brings South Korea’s medal total to three, and the top of the medals table, with the team events to come on Sunday (18 November).

The pair have met twice before with the Georgian winning on both occasions. The result went the way of Gogotchuri once again, but only by default. Ingram received three shido to hand Gogotchuri his first world title and a successful move up from the -90kg where he won gold at the Rio 2016 Paralympics.

Gogotchuri remains unbeaten at an IBSA Judo competition since making his debut in 2015. Great Britain’s Chris Skelley reached his best ever Worlds performance with third. He was joined by Russia’s* 2014 gold medallist Rushan Kuramagomedov.

With a beautiful sweep of the feet against Russia’s* Vladimir Fedin, the Ukrainian was awarded an ippon to improve on his bronze medal from 2014.

Vahid Noura grabbed bronze for Iran after his Moldovan opponent Oleg Cretul pulled out of the contest due to injury. Great Britain’s Elliot Stewart also occupied third place on the podium.

A hugely tactical fight in the women’s -70kg saw both fighters break down after the match, one in joy and the other in disappointment.

Brazil’s Paralympic silver medallist Alana Martins Maldonado spent most of her fight trying to resist Uzbekistan’s Asian champion Vasila Aliboeva, and it looked to be going the way of the Uzbek.

But the tables turned when Martins just managed to topple her opponent and then hold her on the mat for an Ippon. It is the Brazilian’s first world title.

Immediately embracing her coaches after the match, Martins spoke with a broken voice and tears in her eyes.

Mexico’s Paralympic champion Lenia Ruvalcaba will have to wait four more years for her chance at her first world title. Ruvalcaba was beaten by Aliboeva in the semi-final, but overcame Azerbaijan’s Zulfiyya Huseynova for bronze.

A massive Harai Goshi from China’s Hongyu Wang prompted a huge groan from the crowd in the women’s +70kg.

Wang was facing South Korea’s Hayeong Park in a tactical final which was evenly matched despite the height and size of Wang compared to Park.

But the Chinese judoka managed a good grip which she converted to a throw as the clock ticked down, achieving an ippon.

Meg Emmerich emerged the victor in an all-Brazilian fight for bronze against Rebeca Silva. Carolina Costa claimed Italy’s first medal of Odivelas 2018, taking the other bronze.

Debut winner in the men's heavyweights

A clever sweep of the heels of South Korea’s Woohyeok Song saw the Iranian bring down his opponent. He then managed to hold a squirming Song on the tatami for ippon, adding to his silver medal from October’s Asian Para Games in Jakarta, Indonesia.

“I’m winning this for my nation and my people and with the help of God I was able to win,” Kheirollahzadeh said. “I’m happy with my performance but most of all I hope my coaches are happy with it. It was a very difficult competition and I was able to perform well.”

Azerbaijan’s Athens 2004 and Beijing 2008 Paralympic champion Ilham Zakiyev showed he still has podium potential, winning bronze. Uzbekistan’s Shirin Sharipov, who moved to the +100kg following his bronze from Rio 2016 in the category below, also made it into the top three.

A total of 268 judoka from 43 countries are competing for titles at the 2018 IBSA Judo World Championships.

The biggest Worlds in the history of the sport is being shown live at IBSA Judo’s Facebook page and IBSA’s YouTube channel, with finals also shown on the International Paralympic Committee's website.

Live results are available on the Judo World Championships website.