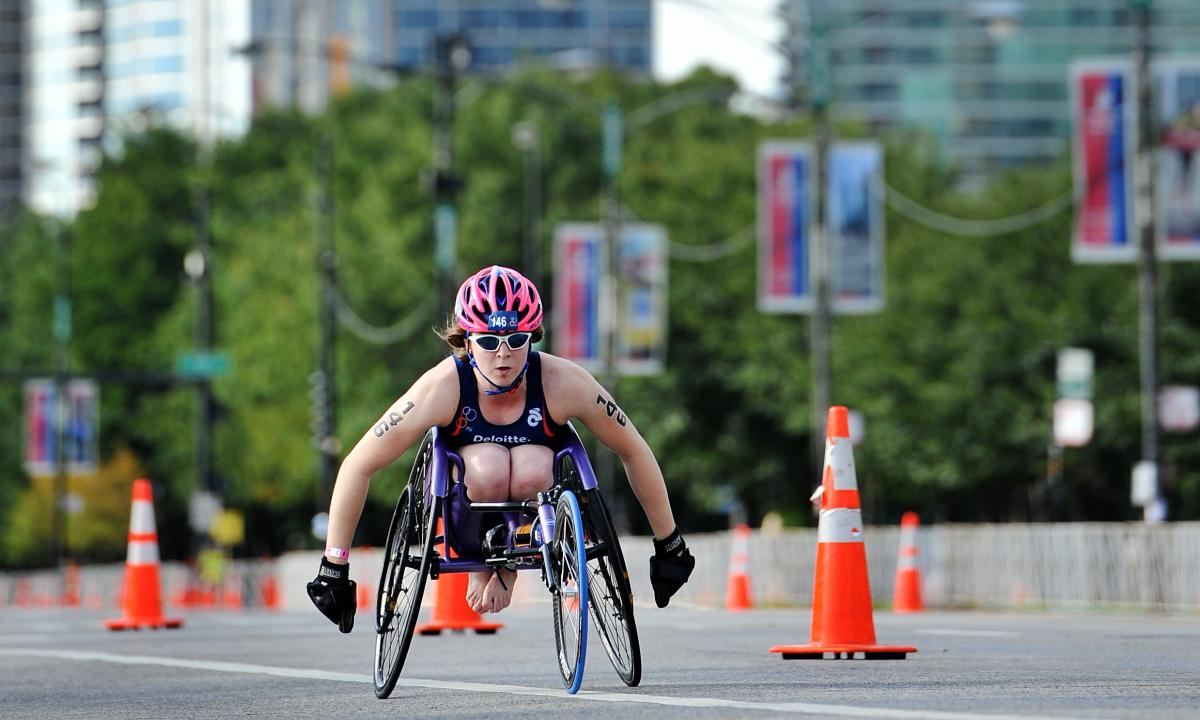 ⒸInternational Triathlon Union
By Megan Mindel | For the IPC

Both Championships are an opportunity for para-triathletes to score points and quota spots to book their tickets to the Rio 2016 Paralympic Games, where the sport will debut.

The event in Sarasota, Florida, will feature triathletes from the USA, Mexico, Canada and Brazil racing men’s and women’s PT1-PT5 divisions.

The USA’s current world No. 1 Krige Schabort will be looking to defend his American Championship gold against Brazil’s national champion Fernando Aranha. Schabort finished second at the 2015 World Championships to Australian Bill Chaffey.

On the women’s side, Brazilian national champion Danielle Nobile will take on the USA’s 2015 world champion and current world No. 1 Kendall Gretcsh. Gretsch won all four races she competed in during 2015.

The USA’s Hailey Danisewicz, Allysa Seely and Melissa Stockwell will compete against each other in the women’s competition for the first time this year. The US trio swept the women’s PT2 podium at the Para-Triathlon World Championships in Chicago, USA.

The USA’s Mark Barr will also be looking to defend his 2015 CAMTRI title.

The PT3 division will be an all Brazilian race between Edson Dantas, Leonardo Cunelo and Jorge Luis Fonseca. Highlights of Fonseca’s 2015 season include top finishes at the Brazilian National Championship and the Rio de Janeiro ITU World Para-triathlon Event. Cunelo will be looking for his first victory of 2016 after coming in second at the 2015 World Championships.

Jose Abraham Estra Sierra will be the solo racer representing Mexico. Sierra, ranked fourth in the world, will be challenged by the USA’s Chris Hammer, who beat Sierra in this event last year by 51 seconds.

Canadian Chantel Givens will look to defend her title against the USA’s Grace Norman and Patricia Collins. Norman finished second in Chicago and is currently ranked No. 2 in the world.

The USA’s Aaron Scheidies highlights the men’s side after finishing first in the World Championships last year.

More information on the 2016 Sarasota CAMTRI Para-triathlon American Championships can be found on the event website.

The race will feature competitors from South Africa, Morocco, Hungary and the Netherlands across the men’s PT1-PT5 races, and women’s PT1, PT3 and PT4.

South African’s Anton Swanepoel is one to watch in the men’s PT1, having won last year’s Championships and is also the reigning national champion.

South Africans Nicholas Newman and Stan Andrews will be an interesting matchup in the men’s PT4 race. Andrews bested Newman in the 2015 African and Pan Arab Championships.

In the men’s PT5, South Africa’s national champion David Jones won the 2015 African and Pan Arab Championships and is one to keep tabs on.