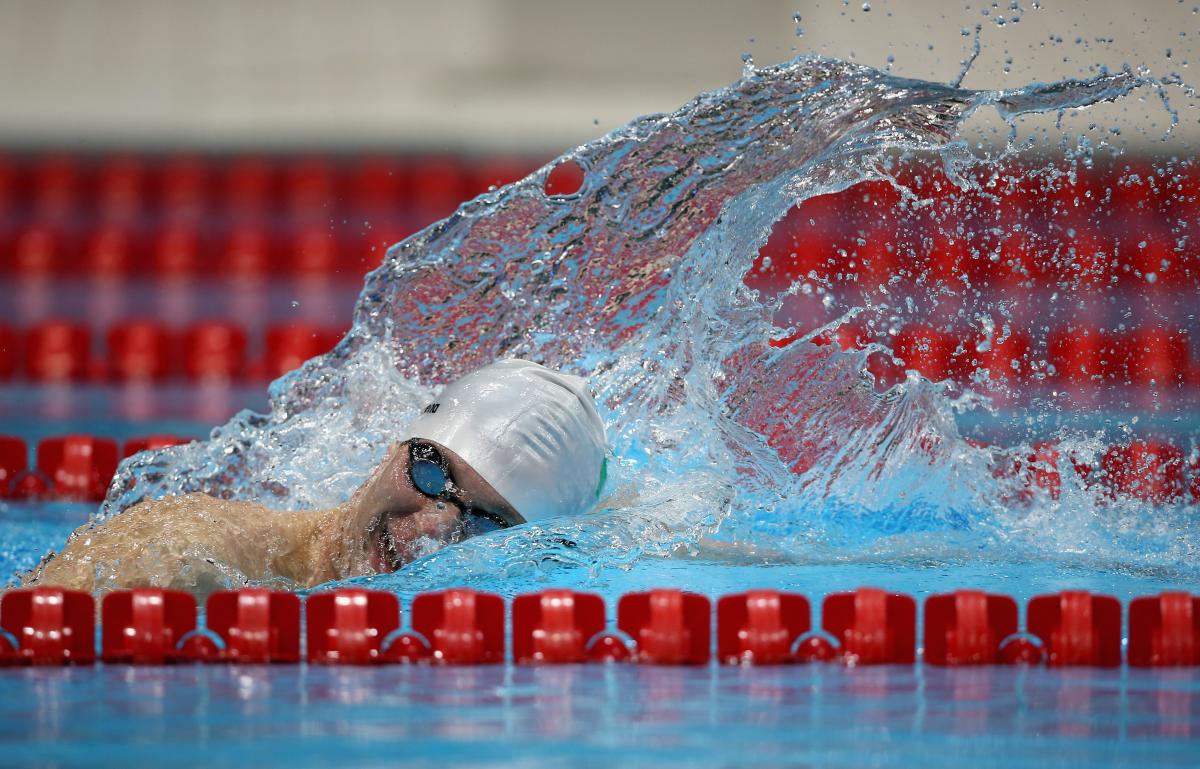 Darragh McDonald of Ireland competes in the Men's 400m freestyle - S6 heats on day three of the London 2012 Paralympic Games at the Aquatics Centre on September 1, 2012.

McDonald proved to be very popular with the crowds at the Aquatics Centre and will be hoping to dazzle on a different stage in just a few weeks.

Two London 2012 medallists will be heading to Montreal for the 2013 IPC Swimming World Championships which begin on 12 August, as the future for Irish swimming continues to look bright.

Nineteen year-old Darragh McDonald will be hoping to defend his 400m freestyle S6 title which he collected in London, but he will also be lining up against Paralympic Champion Qing Xu of China in the 100m freestyle S6 and 50m freestyle S6, where Xu is the world record holder.

McDonald proved to be very popular with the crowds at the Aquatics Centre and will be hoping to dazzle on a different stage in just a few weeks.

Bethany Firth, the youngest member of the team at just 17, claimed her own Paralympic title and record in London winning the first gold for Ireland at the Games in the 100m backstroke S14 with a time of 1:08.93. She will line up against Australian Corry Taylor and Marlou van der Kulk of the Netherlands in a direct repeat of the gold, silver and bronze medal winning final.

James Scully set a personal best in London against an incredibly tough field of athletes that includes Brazilian superstar and ten-time world champion Daniel Dias in the 200m freestyle S5. Following his performances at the 2011 IPC European Championships in Berlin, Scully won Swim Ireland’s Disability Swimmer of the Year. He will also compete in the 50m freestyle S5, 50m backstroke, 100m freestyle and 200m freestyle S5.

Rounding off the team sheet for Ireland are Laurence McGivern who will enter the 100m backstroke S5, Ellen Keane in the 50m and 100m freestyle S9, 200m individual medley, 100m breaststroke and 100m butterfly and Jonathan McGrath in the 400m freestyle S8.

The team was confirmed as Allianz Ireland announced that they will continue their partnership with Paralympics Ireland until Rio 2016.

“Allianz are proud to renew its sponsorship of Paralympics Ireland as they embark on another Paralympic journey. The success of the 2012 Irish Paralympic Team was testament to the huge dedication, determination and professionalism of the athletes and support staff who represented our country on the world stage. It is a privilege and an honour for Allianz to play a role on the road to Rio.”

“It is fantastic that Allianz Ireland have renewed their association with Paralympics Ireland. Their passionate support played a key role in publicising the success of Irish athletes at London 2012 and we look forward to developing our dynamic partnership.”

The Irish swim team claimed two of Ireland’s total of eight golds in London. It will be their first entry into a World Championships following that success.

Tickets for the 2013 IPC Swimming World Championships, which take place from 12-18 August in Montreal, Canada, are on sale now. Featuring around 500 athletes from over 50 countries, it will be the biggest gathering of international swimmers since London 2012.

2013 IPC Swimming World Championships
Benoit Huot: My competition will be strong at Montreal 2013