In a highly contentious women’s foil category A final, the Hungarian beat Paralympic champion Jing Rong. Krajnyak fought hard to come back against the Chinese as both women jostled for position.

With the match even at 14-14 Krajnyak found her reserves and managed to land the final blow.

“I had very bad feelings this morning. I felt that I wanted to find some more emotions to find better results after some technical issues,” the winner said after the combat.

“I was very proud because of this very difficult road and draw. Because of this draw, I had to win all the matches step-by-step and got better and better.”

On whether she think she can retain her foil world title later on this year in Cheongju, South Korea, Krajnyak added: “I will work on it with all my power so I am very optimistic and looking forward to the challenge.”

The pair had already met in the foil final with Hu the victor by the smallest possible margin. In the epee, Coutya had to settle for silver once again by just one point as Hu landed a killer advance.

Great Britain did however manage to top the podium in the men’s epee category A courtesy of Paralympic silver medallist Piers Gilliver. He overcame China’s Paralympic champion Gang Sun 15-10.

“It’s great to come out and win the first few qualifiers [for the Tokyo 2020 Paralympics], it really means a lot to me,” Gilliver said.

“I’m in good form. I’m very lucky to have a great coach and have a great support staff around me so I feel like I am able to keep on improving.

“Even though I’ve been in the sport for a while now I still get those improvements and every competition seems to be getting better so looking towards a World Championships, it all comes down to that this year so I’m feeling very confident.”

Iraq rounded off a good day on the piste with their second bronze medal coming from Zainulabdeen Al-Madhkhoori. Russia’s Maxim Shaburov also secured third place on the podium.

Competition at the IWAS World Games is the opening Wheelchair Fencing World Cup of 2019 and a qualifier for Tokyo 2020.

Following on from his win in R1 (men’s 10m air rifle standing SH1) on the opening day, this time Alaryani had to show his experience in kneeling, prone and standing positions.

Over on the pistol range of the Al Dhaid Sports Club, it was Latvia’s Genadjis Sicevs who triumphed.

Shooting in P2 (men’s 10m air pistol SH1), Sicevs was the only non-home athlete to make it onto the podium on Tuesday.

Yaqoob Al Zarooni and Saeed Alteneiji were the silver and bronze medallists for the UAE.

The 2019 IWAS World Games continue until 16 February. As well as shooting and wheelchair fencing, five other sports are on the programme.

Athletics, badminton, table tennis, swimming and archery all get underway on 13 February. 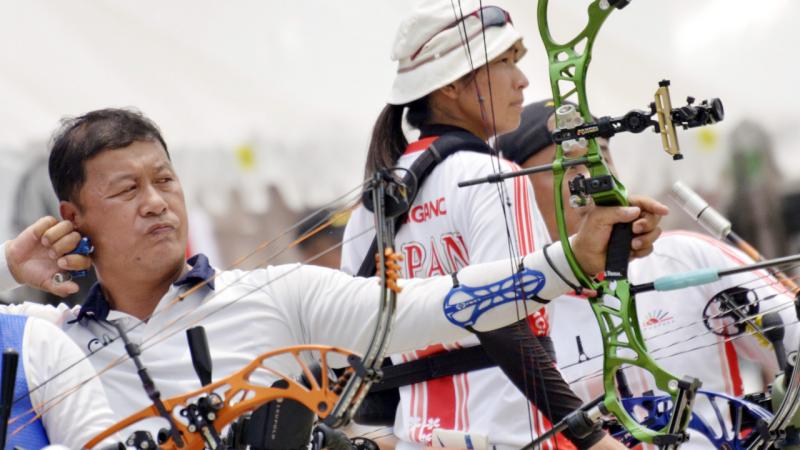