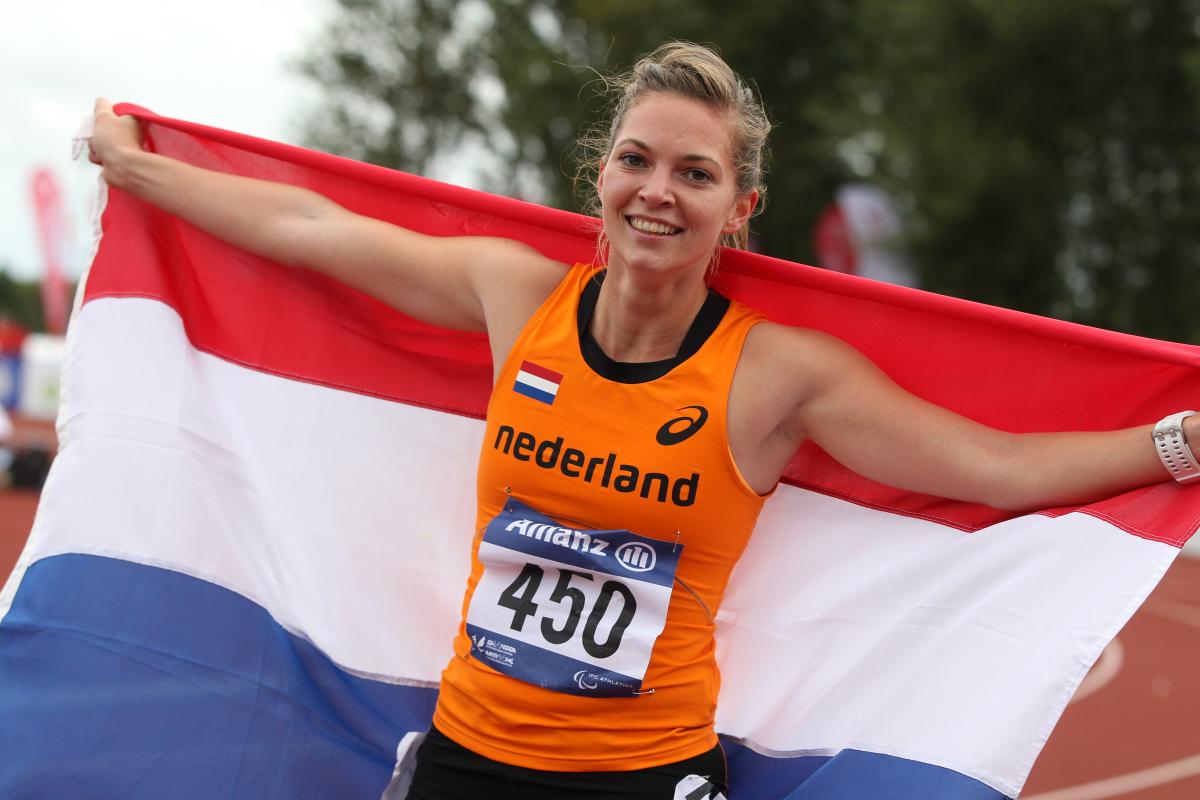 The Dutchwoman had to give it her all to get past Germany’s Irmgard Bensusan, but with 50m remaining the 22-year-old powered in to the lead, crossing the line with a season’s best 26.89.

“It feels so good – the 200m is definitely my favourite event so I really wanted to win this one,” she said. “I was a bit tired after the 100m yesterday but I was determined to do well. I’m delighted with the gold. I’ve made some changes to my training so I’m looking forward to getting even faster in the future.”

Van Rhijn’s victory was just one of a number of impressive sprint double titles won on the third day of competition, and at just 14-years-old, Great Britain’s new young talent Maria Lyle looks set for many more to come.

World and Paralympic champion Jason Smyth stormed out the blocks in the men’s 200m T12 to complete his European double in Swansea, clocking 21.67 in the blustery conditions.

“I’m delighted and over the moon. I came to the championships for two gold medals so it’s nice to stand here knowing that’s what I’ve done,” said Smyth.

There was a golden double too for Poland’s world gold medallist Michal Derus as he added the 100m T47 title to the 200m gold he won on Wednesday, and Ukraine’s European 100m T38 champion Mykyta Senyk stormed home to win the 200m T38 in 23.99, 0.5 seconds shy of his personal best.

World gold medallist Dmitrii Safranov made winning look easy as he crossed the line with arms aloft in the 200m T35, and another Russian double came courtesy of world champion Andrey Vdovin, winning the 200m T37 with a season’s best 23.23 to add to his 100m title – and with the 400m still to come.

Oxana Boturchuk stays on track for her hat trick of European track gold medals, winning the 200m T12 in fine form. The Ukrainian ran a terrific bend to pull clear of Germany’s Katrin Mueller-Rottgardt, and will be one to watch in the 400m T12 tomorrow.

Two men are already in possession of three European track golds – Russia’s Evgenii Shvetcov continued his domination of the T36 sprints, winning the 200m in 25.34, whilst Henry Manni won the 200m T34 title to add to his 100m and 800m victories – he’ll be hoping for a fourth in the 400m tomorrow.

“It was raining very heavily and it was very wet, but I’m from Finland and I am used to it – I really like it that way and always race well,” said Manni.

Great Britain’s Samantha Kinghorn is now a triple European champion too, showing superb tactical awareness to win the 800m T53. The 18-year-old found a gap in the inside lane as she pushed round the final bend to get past Turkey’s Hamide Kurt.

“It was a pretty tough race today,” she said. “I was trying to think how to get round her. I sneaked into the inside and was really glad to get through - it was quite scary doing it that way. I made a few sneaky moves out to the side which made her think I was going round. I had planned to do half the work but she really took most of the race until the final straight.

Switzerland’s Manuela Schaer also made it three from three with one to go, dominating the field once again – this time to win the 800m T54 out on the rain soaked track. Her compatriot Marcel Hug won his 800m race too – the men’s T54 class - pushing hard past Kenny van Weeghel round the final bend to win in 1:37.77.

Felix Streng underlined his credentials as another young talent to watch out for, winning the 200m T44 in fine style, despite the rainy conditions. The German clocked 22.93 with his compatriot David Behre taking silver.

Anton Prokhorov upset the form book in the 200m T42, beating Great Britain’s world and Paralympic champion Richard Whitehead after a strong start out the blocks. Whitehead was unable to catch the Russian down the home straight who finished with a personal best 26.48.

And after yesterday’s heartache of a false start in the 100m, there was jubilation for Frenchman Timothee Adolphe who pipped Spain’s Gerard Desgarrega Puigdevall to the line in the 200m T12 by just one hundredth of a second.

Alexander Zverev ran a superb race to win the 200m T13, whilst his compatriot Aygyul Sakhibzadaeva took the 100m T36 gold. And in the 200m T53, Pierre Fairbank came out on top – speeding past European record holder Mickey Bushell of Great Britain.

And there were cheers around the stadium as local favourite and world champion Aled Davies clinched gold in the shot put F42. The 23-year-old, who set a new world record in Lyon last year, threw a best of 13.66, more than one metre clear of the field.

“It was a change for me because in the Commonwealth Games I competed in the discus so my focus was all on that but it’s good to get the win. It was lovely to come back home after Glasgow and win a medal in my own back yard.

“I can do a lot more but considering the conditions I’m happy,” said Low. “The mix of wind and rain made it difficult. I’m the world record holder so I was very confident coming in to the competition but it’s always nice to beat the world champion.

“I switched my coach about a year ago and I wasn’t sure that was the right decision, but the hard work is paying off. I’m looking forward to going back to training and I also think I can still improve in my 100m.”

Finland’s Aleksi Kirjonen struck gold with a season’s best 31.12m in the javelin F56, adding to the bronze medal he picked up in the shot put F57 earlier in the week, whilst Latvia’s world silver medallist Dmitrijs Silvos won the javelin F37/38 with a personal best 47.32m

In-form Vladimir Sviridov took gold with 14.62m in the men’s shot put F36, having thrown a new world record back in May, and Svetlana Sergeeva added another gold for Russia in the javelin F37, whilst Alexander El’Min picked up Russia’s 10th gold of the day in the shot put F35, taking their medal tally so far up to 59 with 26 golds. Germany sit second with 11 golds and 34 medals overall, with Great Britain in third.

Videos from the morning session (day 3) are available in a playlist on the IPC's YouTube channel.

Videos from the afternoon session will be available in seperate playlist. 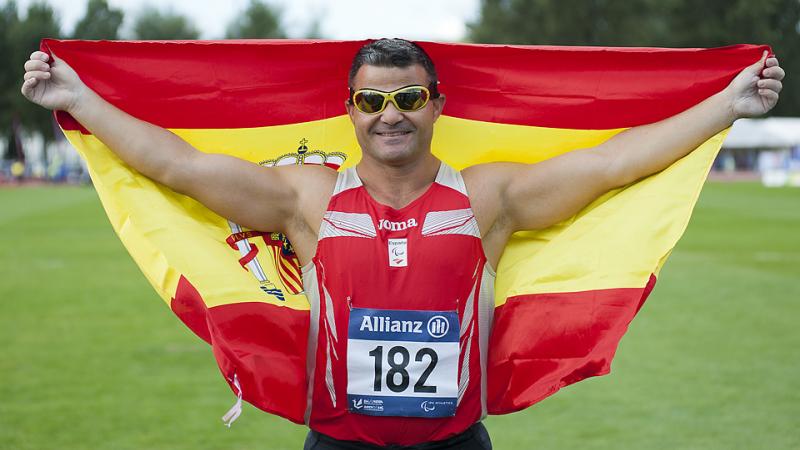 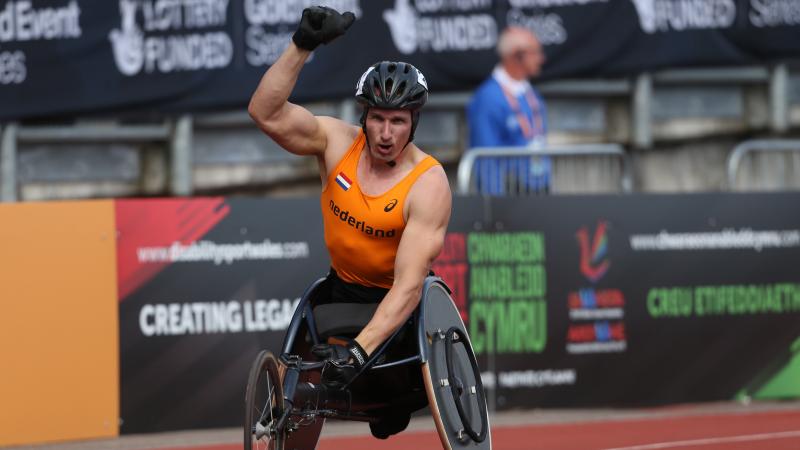