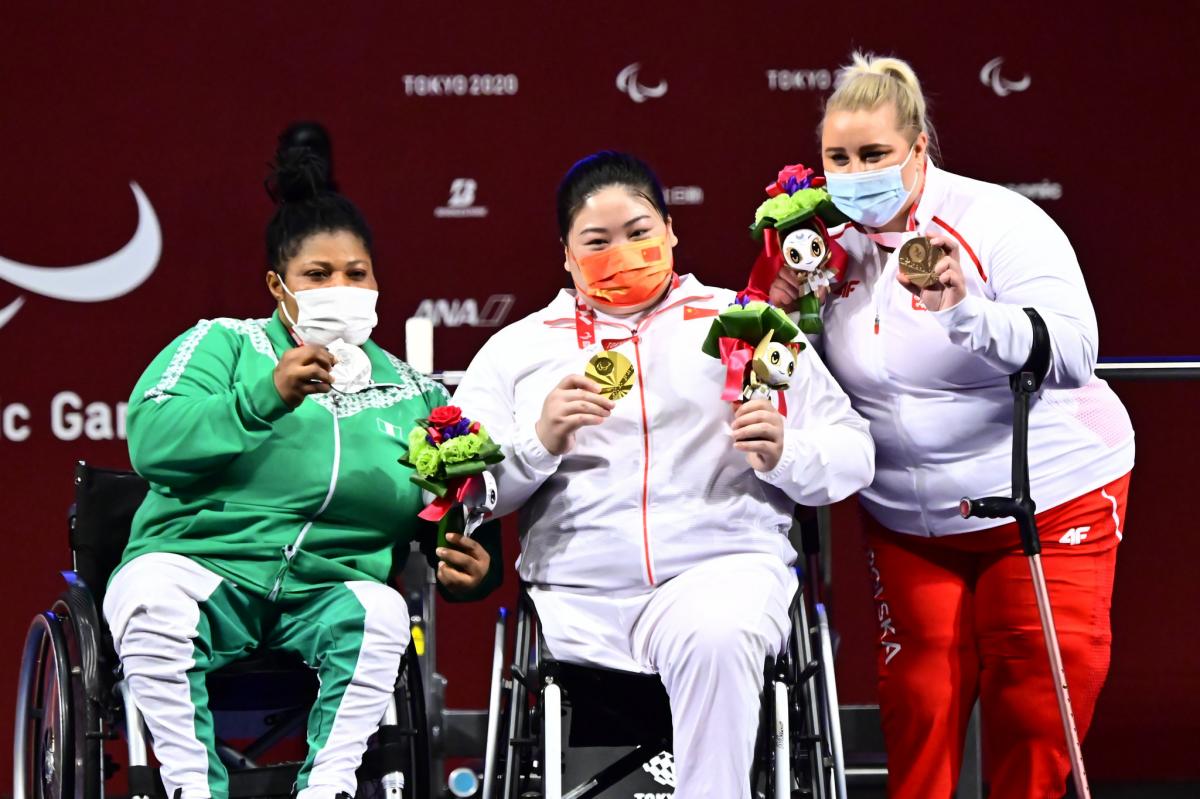 Nigeria’s Loveline Obiji, China’s Xuemei Deng, and Poland’s Marzena Zieba are the favourites to win medals in Tbilisi as they did in Tokyo.
ⒸHiroki Nishioka/WPPO
By World Para Powerlifting

Day seven of the Tbilisi 2021 World Para Powerlifting Championships will be the last with three events in the same day.

Saturday (4 December) in the Georgian capital will be eventful for the world's best Para powerlifters with one women's and two men's competitions on the schedule.

The women's over 86kg category will get underway at 09:30 (local time) as the last individual event for female athletes. There are two groups on the programme at the Hualing Ballroom to decide the new world champion.

Xuemei Deng from China is the favourite to win gold as the reigning Paralympic and world titleholder. She triumphed at Tokyo 2020 three months ago outlifting Nigeria's Loveline Obiji by six kilograms.

China's Deng Xuemei pushed 151kg to break the Asian Record and get the gold in the women's over 86kg!

Besides the Paralympic and world title, Deng has the Asia-Oceania Open Championships gold medal to her name from Kitakyushu, Japan in 2018.

Nigeria's Obiji will be Deng's main rival in Tbilisi as the current Paralympic silver medal holder. She is also a Paralympic champion from London 2012 and a three-time World Championships silver medallist.

In 2016, Obiji lost out on the gold medal at the Paralympic Games in Rio de Janeiro to Egypt's Randa Mahmoud. The gold medallist at Rio 2016 and the Mexico City 2017 World Championships switched categories for Tbilisi 2021 and will compete in the women's up to 86kg.

Despite Mahmoud's absence, Deng and Obiji will have to watch out for Perla Barcenas from Mexico who is the current Lima 2019 Parapan American Games champion. Hyung Jun from South Korea will also have her eyes set on the prize as the Asian Para Games 2018 gold medallist.

Poland's Marzena Zieba, a two-time Paralympic medallist, is the last of the medal contenders coming to Georgia. She has never won a World Championships medal in three appearances.

After the break, the competition will continue with the men's up to 88kg category starting at 12:50 (local time). There are three groups on the schedule for the event.

Jordan’s Abdelkareem Mohammed Khattab is the absolute favourite to take the gold medal. He is the reigning Paralympic champion and the world record holder from the Dubai 2021 World Cup.

Abdelkareem Khattab 🇯🇴 broke the men's up to 88kg WR two times to take the🥇 at #Dubai2021 World Cup!

The world record now stands on the 240kg-mark, while Khattab also holds the Paralympic record broken in Tokyo. He lifted 231kg in the 'power lift' attempt.

Jixiong Ye of China won gold at the Nur-Sultan 2019 Worlds, while he had to settle for silver at the Tokyo 2020 Paralympics. He will be Khattab's main rival in Tbilisi with the Tokyo 2020 bronze medallist Hany Abdelhady of Egypt switching to the men's up to 97kg category.

The 52-year-old Rio 2016 Paralympic gold medallist Mohammed Khamis Khalaf of United Arab Emirates (UAE) also switched to the men's up to 97kg category which is the last on schedule on day seven.

The action will start at 17:30 pm with three groups of athletes fighting for glory.

China's Yan Panpan is the reigning Paralympic champion from Tokyo and the main contender for gold in Tbilisi.

I think you could call it a successful day for Panpan Yan of #CHN #Powerlifting #Tokyo2020 #Paralympics pic.twitter.com/nkqKaPg4iS

He won second place at the Nur-Sultan 2019 World Championships when Iran's Seyedhamed Solhipouravanji triumphed with the gold medal. Panpan took his revenge in Tokyo and extended the rivalry with Solhipouravanji.

Colombia's Fabio Torres is another name worth mentioning in the battle for gold. He is the reigning bronze medallist from the Tokyo 2020 Paralympics and the Nur-Sultan 2019 Worlds.

In both 2015 and 2019, Torres had to settle for silver at the Parapan American Games.