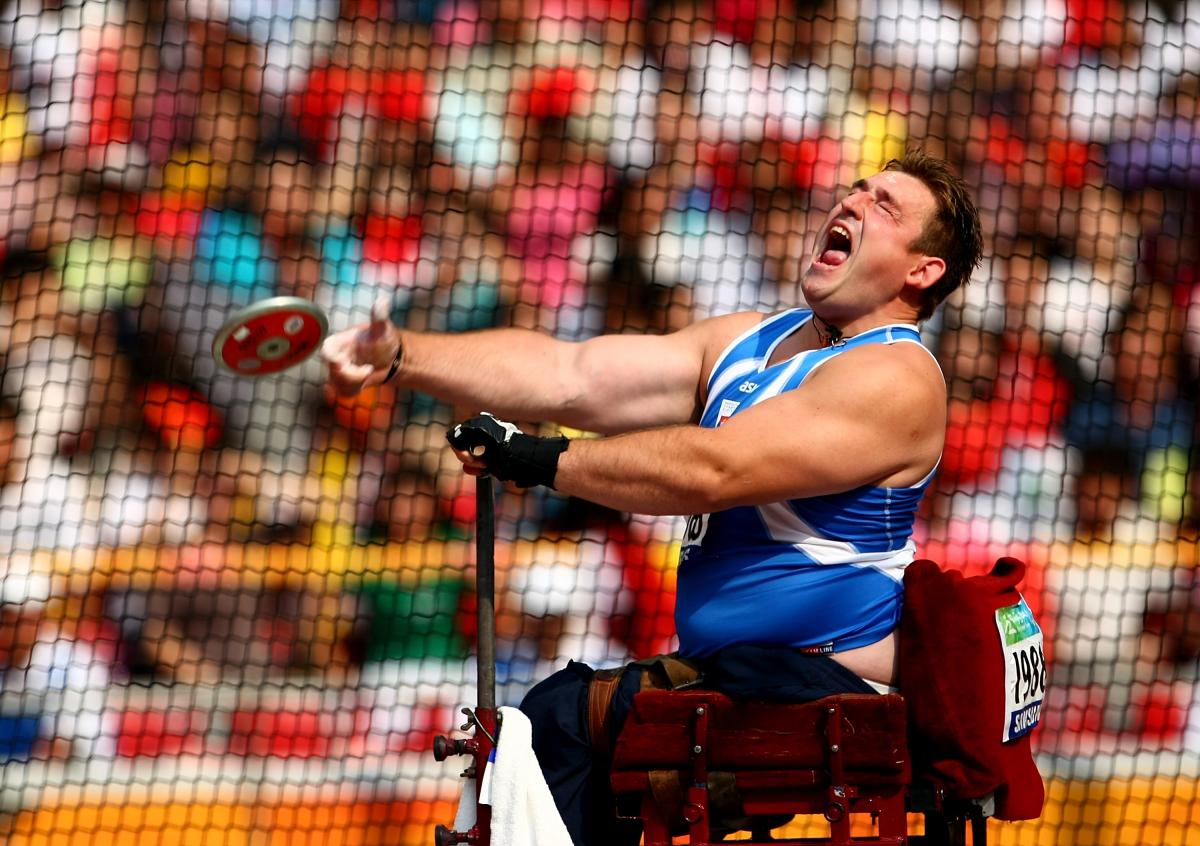 Bulgaria’s Mustafa Yuseinov had the mortification to throw a world record in the men’s F54/55/56 discus yet only take home bronze as Leonardo Diaz (Cuba) and Serbia’s Drazenko Mitrovic put in superior performances at the IPC Athletics World Championships.

There were only two other world records on the day, the tally of five being the total for the championships to 47.

Ireland’s Michael McKillop celebrated his 21st birthday in style with a gold medal and new world record in the men’s 800m T37 in 1:58.90.

Having set a world record in the 1500m earlier, McKillop was only looking for the gold medal, but once he had kicked at the 400m the world record became a reality.

“In Beijing I waited to the 250m, but today I decided to go early and catch them out. It worked perfectly.

The big surprise of the morning was the defeat of triple gold medal winner Michelle Stilwell, of Canada. She was upstaged in the T52 800m race by Kerry Morgan (USA) in 2:29.33secs. Lyudmyla Danylina of the Ukraine was third in 2:41.38secs.

The triple jump F46 went to Huseyn Hasanov of Azerbaijan with a new championship leap of 13.56m with Iraq’s Fadhil Al-Dabbagh (13.31m) getting silver and Japan’s Hiroyuki Yasui the bronze (13.11m).

Azerbaijan got its second gold of the morning plus bronze in the F12 triple jump with Oleg Panyutin’s leap of 15.09m. Ukraine’s Ivan Kytsenko (14.88m) was second and Vladimir Zayets was third.

Switzerland’s Marcel Hug again found one better in winning his fourth silver medal of the games in the men’s 400m T54. He was beaten by China’s Chengming (47.95secs) with Germany’s Marc Schuh (48.34) third.

Huzhao Li (China) continued his good form of the championships with a record in the T53 400m in 49.86, defeating the previous record holder Richard Colman, of Australia (49.93). Korea’s Byunghoon Yoo (51.31) was third.

Australia was on the podium in the women’s 200m T35 through Rachael Dodds (36.78sec) with Sophia Warner (Great Britain) taking silver in 37.04secs. Germany’s Uta Streckert (38.13secs) was third.

Antonis Aresti won Cyprus’s second gold medal of the championship with victory in the Men’s 400m T46 event in a time of 49.44. Silver went to Austria’s Guenther Matzinger (49.80) and Samuel Colmenares (Venezuela) took bronze in 50.26secs.

In total 47 World records and 121 Championship records have been set over the five days.