Canada, USA and Brazil all breezed and proved themselves as podium favourites. 12 Aug 2015
Imagen 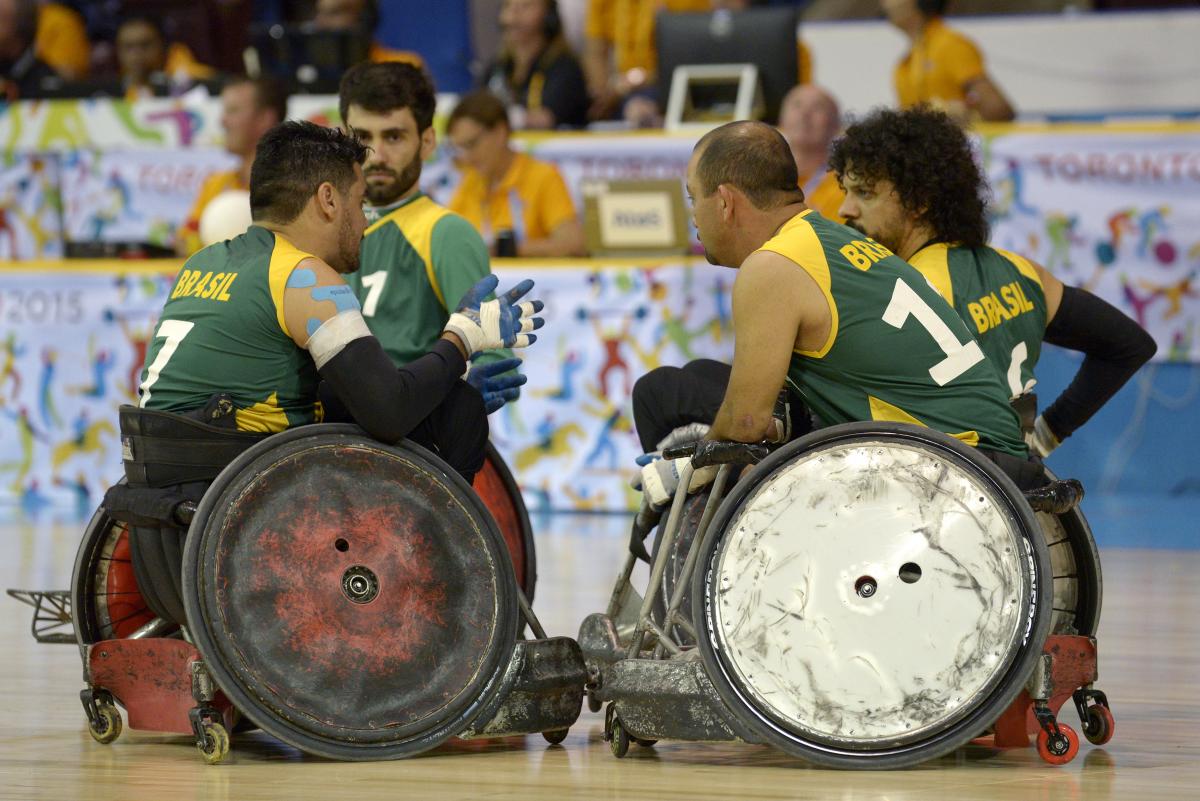 The higher ranked teams continued their winning ways at the Toronto 2015 Parapan American Games on Tuesday (11 August), as Canada, the USA and Brazil all won by large margins to wrap up day four of wheelchair rugby action.

The results now set up an interesting matchup between the USA and Canada – both which are expected to meet again in the gold medal match – on Wednesday (12 August), while Brazil will face Chile.

Brazil made a statement on Tuesday, booking their place in the semifinals. The large crowd at the Mississauga Sports Centre was treated to a defensive clinic as Brazil’s pressure forced Argentina to use all their floor timeouts in the first quarter.

Brazil’s Alexandre Giuriato and Argentina’s Juan Herrera led their respective teams with 14 goals apiece, and both teams gave their reserves extended minutes. The Brazilian bench was a key factor in the victory as coach Luis Pena was able to keep everybody fresh.

Herrera once again struggled with his ball security, committing seven turnovers. With wins over their two closest rivals, Brazil appear to be peaking at the right time and have established themselves as the favourite for the bronze medal.

It was another tough day for Chile in Toronto 2015 as they had to face the reigning Paralympic and world silver medallists.

Canada jumped on Chile early, going on a 13-0 run to start the game. Canadian coach Kevin Orr shuffled his lineup throughout the game, even going under points at times and giving his low-pointers plenty of action, showcasing Team Canada’s versatility and skill. Fabien Lavoie led the Canadians with 11 goals.

After the match, Chile unveiled a banner to the crowd that read “Defeats inspires us to keep working.”

“We have only been playing for a year and we have learned we have to have better speed, better fitness and better tactics,” Chile’s captain Juan Rodriguez Reyes said.

Added Chile’s Rodriguez Reyes: “We do not get crowds in South America, so this is incredible and inspires us to work hard.”

The USA got another blowout victory, this time at the expense of Colombia. Defence has been the Americans specialty throughout the Parapan Am Games, and it continued on Tuesday. The US racked up steals and forced Colombia into turnovers on the majority of possessions and converted those into points.

US coach James Gumbert once again gave playing time to each of his 12 players. USA’s Clayton Brackett led all scorers with 15 goals.

Colombia’s leading scorer going into the game, Jhon Orozco, did not receive much playing time as Moises Alonso Alvarez saw the bulk of the minutes at the one spot.

A live stream will also be available via the IPC website.

America
Toronto 2015: Day one as it happens
Imagen