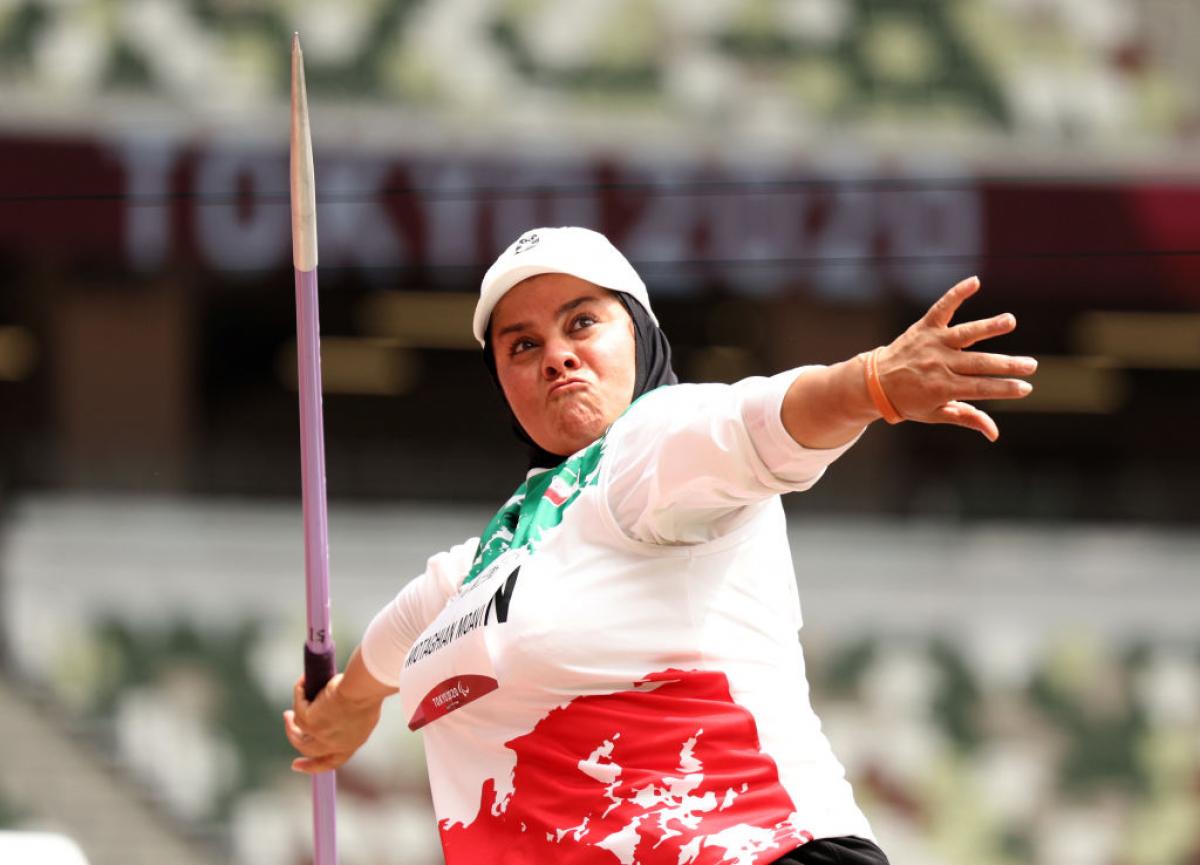 THE THROW FOR GOLD: Hashemiyeh Motaghian Moavi of Team Iran competes in the women's javelin throw - F56 final on day 7 of the Tokyo 2020 Paralympic Games at Olympic Stadium in Tokyo, Japan.
ⒸGetty
By ND Prashant I For the IPC

It was a day that Iranian Para athlete Hashemiyeh Motaghian Moavi had been dreaming about for years.

The 35-year-old set an example for women in the country by clinching gold in the javelin F56 at Tokyo 2020 Paralympic Games with a World record throw of 24.50m.

Tears rolled out of Moavi eyes as the Iranian national anthem was being played during the medal’s ceremony. She had never experienced anything like this before and was still choking with emotions as she entered the media mixed-zone.

“I don’t know what to say, I’m lost for words. There was so much going through my mind I can’t tell. You don’t know how much this gold means to me and my family and the country as a whole,” said a thrilled Moavi, with the help of a translator.

Moavi, who was participating in her second Paralympic Games, missed out of the podium spot in Rio 2016 and that fourth-place finish was hurting her a lot.

“Rio was my first Games, but I was so close to winning a medal there. I didn’t want to miss out on it again in Tokyo. I gave my everything out there. It was hot and humid, but I kept my focus going. I would say all my hard work paid off ,” said Moavi, who started with throws of 22.94m, 22.98m before coming up with a sensational throw of 24.50m on the third. She was seen screaming her heart out on realising that she had set the world record.

Moavi has been lucky to have a family that has stood like a rock behind her all the way through. And understandably she was all praise for them.

“This medal is first for my family, brothers, sisters, my parents, especially my mother. Thanks to her for treating me normal and providing me all the support that I wanted. Our government and everyone associated with Para sport in Iran has been equally deserving for all the praise. Had it not been for each one of them, I wouldn’t be here,” said Moavi, who urged everyone to believe that their kids are capable of doing anything and just back them up.

“I’m glad today that I set an example and it will open doors for many kids out there back home. Most of us keep complaining about what we have lost or about our physical disabilities. I would say if you are mentally strong then you can achieve anything. The first thing that one need to do is get that sadness out of your life and find ways to move on and excel. The will to do something and being happy and cheerful is most important.”

Though Moavi is thrilled about the prospect of the grand ceremony she is expecting back home, she was quick to reveal that more is still to come.

“I’m looking forward to the welcome that we will receive and meeting my family. It’s going to be a special moment and I want to cherish that for life. Then I will be starting my training in a few days and will keep pushing hard and try to set new bench marks.

“The Asian Games next would be perfect stage to build on this success before looking ahead to Paris,” said Moavi beaming with confidence.