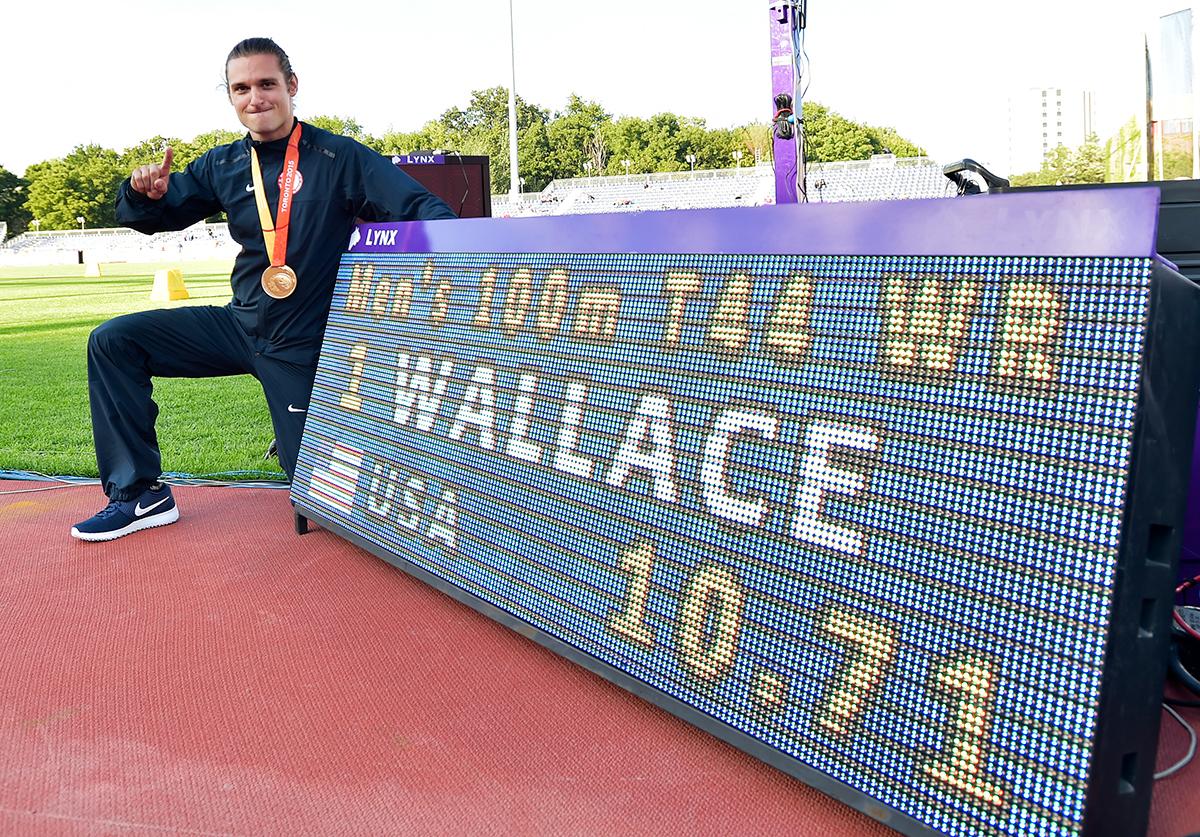 “I was praying the wind was legal. I was excited and elated when I saw the time and my first thought when I saw it was ‘please be legal’."

In the lead-up to the race, the 25-year-old predicted a world record would be needed to retain the gold he won four years ago in Guadalajara, Mexico. He was right as he stormed to victory in 10.71 seconds to lower the previous best held by compatriot Richard Browne by 0.04 seconds.

“I was praying the wind was legal. I was excited and elated when I saw the time and my first thought when I saw it was ‘please be legal’,” said Wallace who believes he can go even faster.

“Everything considered I was really happy with how I ran.”

Soon after, three golds came in quick succession for the Rio 2016 hosts.

"The race was good, we executed it like we wanted to. I believe we could have gone a little bit faster, but I am completely happy about the time,” said Brown.

"This is actually my first ever big time gold medal. So this is ecstatic. I can't even begin to explain it."

Argentina’s Yanina Martinez (30.63), a silver medallist four years ago, led from start to finish in the women’s 200m T36 to break her own Americas record. Despite closing in on the winner in the final 50m, Brazil’s Tascitha Oliveira Cruz (31.43) had to settle for silver. Bronze went to Colombia’s Martha Liliana Hernandez Florian (32.70).

After shattering the women’s 100m T12 world record in Monday’s heats to become the world’s fastest female para-athlete, Cuba’s Omard Duarand went even faster on Tuesday in the final as she won gold. Unfortunately a tailwind of 3.7m/s means her time of 11.64 will not stand. Also making the podium was Brazil’s Alice De Oliveira Correa (12.19) and Venezuela’s Greilyz Villaroel (12.79).

Durand’s teammate Leinier Savon (10.61) also bettered the world record on his way to gold in the men’s 100m T12 but again the wind was not legal. The USA’s Josiah Jamison (11.15) and Mexico’s Manuel Martinez (11.18) completed the podium.

"I am very happy, it is my second competition of the year and I improved my standing a lot since, I am completely happy," said Coelho, who also broke the Americas record.

"I am competing at shot put and discus throw tomorrow, I started off great here today and I will finish it like so as well."