The YouTube Channel of ParalympicSport.TV affords users the possibility to view different videos as well as provide comments and feedback to the videos. Many viewers have subscribed to the channel and become regular viewers, following the Beijing 2008 Paralympic Games. Visitors can not only subscribe to the channel, but also become friends, watch favourite videos and playlists, and connect with the people of ParalympicSport.TV. On the main channel, twelve different Paralympic sports are part of the programme, including Athletics, Boccia, Cycling (Track), Football 7-a-Side, Judo, Table Tennis, Swimming, Volleyball (Sitting), Wheelchair Basketball, Wheelchair Fencing, Wheelchair Rugby, and Wheelchair Tennis.

ParalympicSport.TV is the IPC's official internet TV channel and has already been receiving positive feedback from fans of Paralympic Sport. It provides an opportunity to those who are interested in watching the Games conveniently on their computer.

The two channels, ParalympicSport.TV and www.youtube.com/paralympicsporttv, are both free of charge for everyone interested in Paralympic sports.

The Beijing 2008 Paralympic Games are taking place from 6 to 17 September in the capital city of China, with the two co-host cities Hong Kong and Qingdao. The Games have a total of 472 medal events. Around 4,000 athletes are representing 147 delegations from around the world. Over 5,000 media representatives are in Beijing reporting on the event. 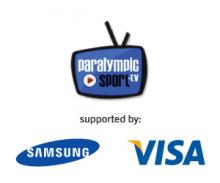