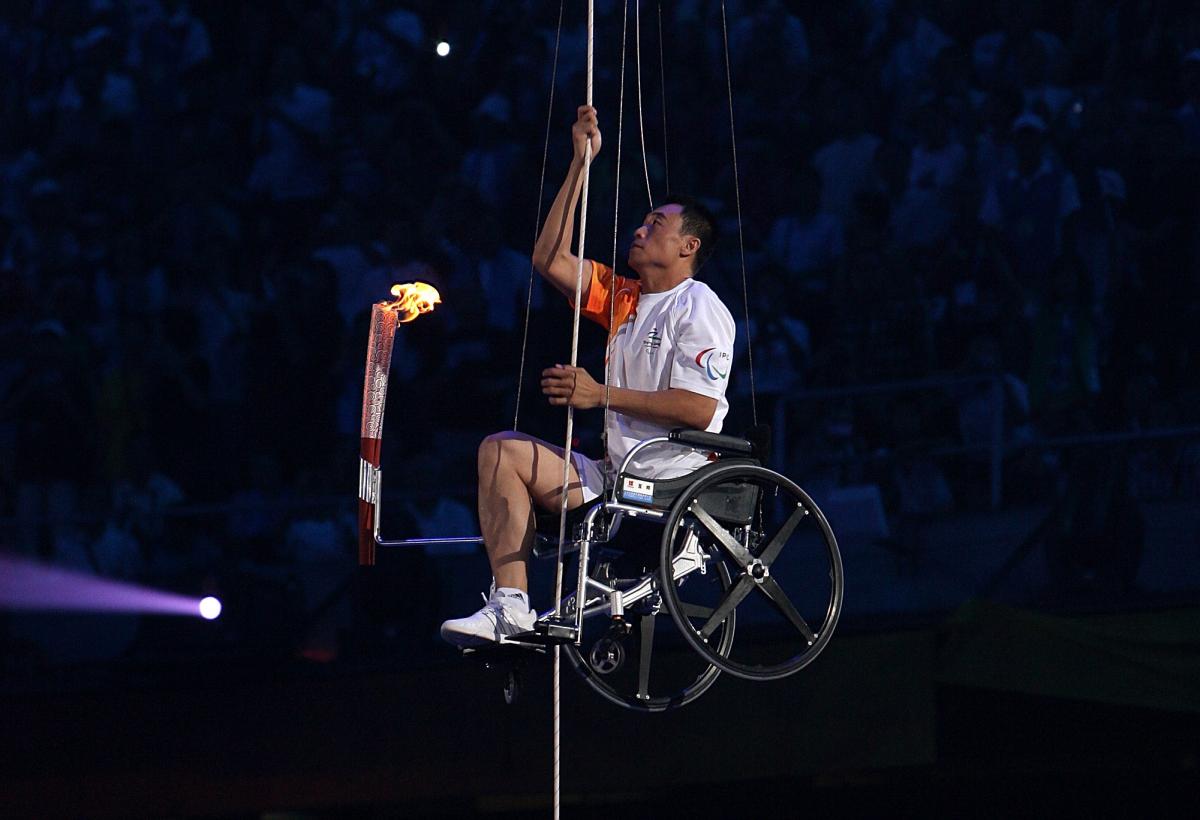 It was an amazing, awe-inspiring sight, and one the Paralympic Movement – and the global audience watching on television – will never forget.

After three years of planning, and a full year of rehearsals, the Opening Ceremony of the Beijing 2008 Paralympic Games took place on 6 September in the immense Bird’s Nest stadium.

A crowd of 90,000 spectators witnessed a sensational ceremony that drew on the themes of sky, earth and humans, and aimed to showcase to the world the Paralympic spirit and Chinese culture.

The colourful and memorable production involved over 4,800 performers, 850 of which had an impairment, and featured the most spectacular lighting of a Paralympic cauldron in the history of the Games.

Hou Bin, a Chinese high jumper who had won Paralympic titles at three consecutive Paralympic Games from Atlanta 1996 through to Athens 2004, was chosen as the man to light the cauldron.

What he did to light the cauldron left the whole world in awe, and showcased to the world the ability of Paralympic athletes to push their bodies to the absolute limit.

With the Paralympic torch fixed to his wheelchair, Bin used his bare hands – and every ounce of energy in his body – to haul himself and his wheelchair 39 metres into the air and light the cauldron on the stadium’s roof.

It was an unbelievable moment, and one that epitomised all four of the Paralympic values of courage, determination, equality and inspiration.

It was an amazing, awe-inspiring sight, and one the Paralympic Movement – and the global audience watching on television – will never forget.

Cheered on by a crowd who could not believe what they were seeing, Bin took over three-and-a-half minutes to climb the rope to the roof.

By the time he reached the summit, he was exhausted.

He took a deep breath, composed himself, and then lit the cauldron to a thunderous roar from the enormous crowd.

It was a symbolic moment, and one that marked the start of a Games that would change Chinese society forever.

But Bin’s achievement was even more remarkable than it first appeared; he completed the climb with a broken finger, suffered days earlier during a rehearsal.

IPC President Sir Philip Craven said: “To watch him climb a rope from the stadium floor to the roof, with a broken finger rubbing on the rope, and with a flame on his chair, was one of the most amazing things I’ve ever seen. That was the Paralympic spirit in action.”