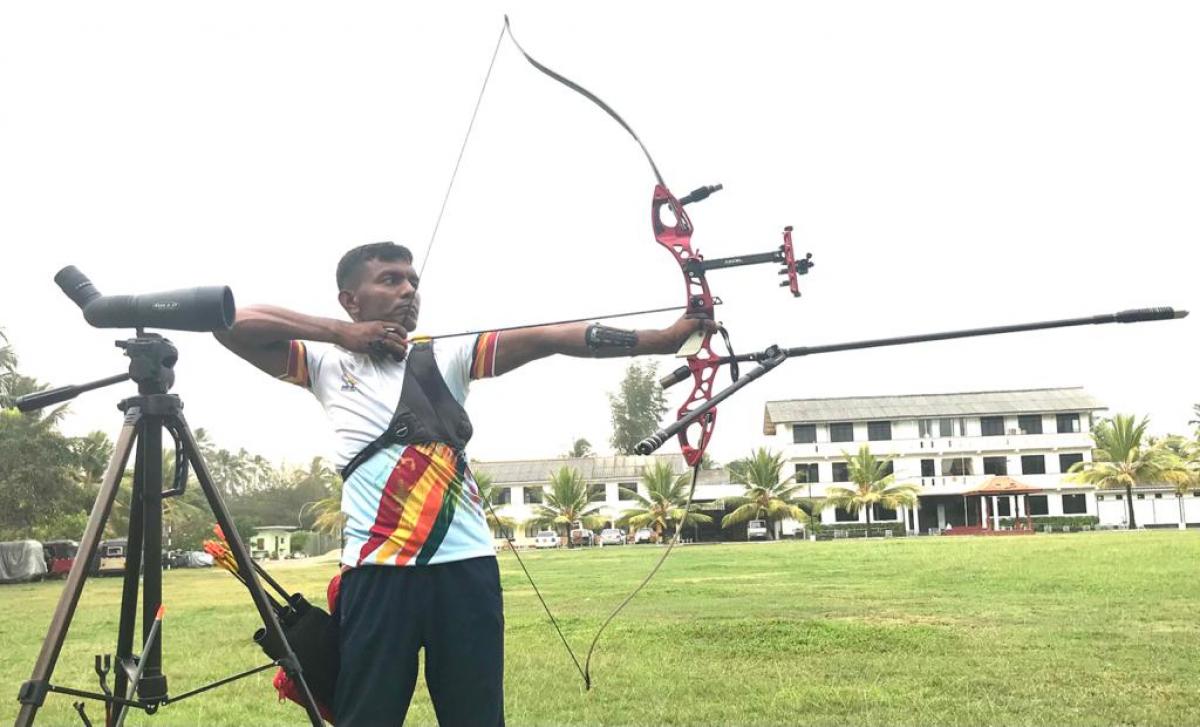 Para archer Sampath Bandara during a training session ahead of the Tokyo 2020 Paralympic Games.
ⒸSL NPC
By Allaam Ousman | For the IPC

There has been an exponential growth in Para sports since the island nation was ravaged by a brutal 30-year-old civil war which gave a new lease of life to wounded survivors.

Sri Lanka’s National Paralympic Committee (NPC) formed in 1995 oversaw steady progress at both local and international level from just one athlete in Atlanta to have the largest representation of nine in three disciplines at the last Paralympics in Rio.

This number will be equalled at the upcoming Games in Tokyo where their leading Para athlete and team captain Herath will aim to convert his bronze into a gold.

Also making his second appearance in the Paralympics will be another javelin thrower Sampath Hettiarachchi (F64), a silver medallist at the 2018 Para Asian Games in Jakarta, Indonesia.

Sri Lanka has competed in athletics, swimming, powerlifting, archery and tennis in the past. Rowing will be the latest addition with their team to Tokyo comprising six athletes, an archer, a wheelchair tennis player and rower.

“For the first time in Paralympic history, rowing got a slot. We won our first medal in 2012 and second in 2016. Our hope is to double the number of medals in Tokyo. Our main medal prospects are in athletics. Our expectation is for at least five athletes to compete for a medal by entering the finals going by their efforts and sacrifices to reach this level,” said NPC President Lt Col Deepal Herath.

Two-time silver medallist in the Javelin F46 category at the World Para Athletics Championship in London (2017) and Dubai (2019) Herath will be spearheading Sri Lanka’s historic quest for that elusive gold.

Team captain when Sri Lanka won a record haul of 15 medals (5 gold, 5 silver and 5 bronze) at the 2018 Asian Para Games in Jakarta, 35-year-old Herath is determined to win in style by setting a world record. He threw a distance of 63.70 metres at a national trial meet in Colombo in May to come within touching distance of the F46 javelin world record of 63.97m.

Herath has been focused on his target while training under the guidance of national throwing coach Pradeep Nishantha with Sri Lankas’ Elite athletic pool in Colombo.

Sri Lanka’s hopes of fielding a bigger contingent than Rio was hampered by travel restrictions caused by the global pandemic resulting in some elite athletes missing out on qualification.

“We were not fortunate to go to international events. If we had gone, we could have sent more athletes. We missed a few international tournaments during the last four months,” said an NPC official.

Herath and Samitha Dulan Kodituwakku were the only two athletes to qualify directly - Herath by virtue of his silver medal in Dubai where Dulan came fourth in the F44 Javelin (57.1m).

A gold medallist at the Asian Para Games, 30-year-old Army Corporal Dulan took up the sport in 2017 after suffering impairment in his left leg following a motor accident. He is considered a sure medal prospect having improved tremendously throwing the javelin over 61 metres at a recent national meet.

Although there were five more athletes within the Tokyo qualifying standard, Sri Lanka were offered only two slots. Palitha Bandara (F42 shot put) and Saman Maduranga Subasinghe (T46 400m) were selected by the NPC considering their local and international performance.

Army soldier Bandara, 28, won a silver medal at the 2018 Asian Para Games where Subasinghe finished in fourth place. Able seaman Subasinghe who lost his left wrist following a grenade blast during the war in 2008, is in fine form after winning a silver at the Fazza Grand Prix in Dubai.

Silver medallist at the 2018 Asian Para Games, Hettiarachchi is determined to make his presence felt in his second appearance at the Paralympics having thrown a Personal Best of 62.11m recently which was better than the world record mark of 59.82m set in 2011 but not recognised by the NPC because it was not an international event.

Bronze medallist in the 2018 Asian Games Long Jump with a leap of 4.51m, 33-year-old Kumudu Priyanka lost both her wrists after handling an explosive by accident. Bubbling with confidence after breaking the five-metre barrier at the National Trials, her best international performance is 4.89m at the World Para Athletics Grand Prix in Dubai this year.

Archer Sampath Bandara also returns as a two-time Paralympian having taken part in Rio. Bandara, who lost his left leg below the knee during the war in 2009 after stepping on an anti-personnel mine, has a world ranking of 34 in Recurve Men. He has a personal best score of 684 and booked his flight to Tokyo after winning the gold medal in the 2019 Asian Archery Championship in Bangkok.

Mahesh Priyamal Jayakody, a paraplegic who was also injured in the battle front, will be rowing for glory in the PR1 Men 1X Single Sculls. A Staff Sergeant in the Army Special Forces Unit, Jayakody tried wheelchair cycling and Para dance before coming under the influence of international rowing umpire and coach Lasantha Welikala.

He underwent a three-month training stint in China before making his international debut in 2017. It paid dividends as he won a silver medal in the 2019 Asian Para Championships in Bangkok. “It was the stepping stone for the Asia Oceania Paralympic qualification regatta last April where he won the event to secure the slot to Tokyo,” said his coach.

Last but not least in the Sri Lanka team is wheelchair tennis star Ranjan Dharmasena who received a Bipartite Invitation after his excellent performance in the World Team Cup Qualification rounds held in Portugal, where he beat some of the top rankers from Israel, Croatia and Greece to remain unbeaten. A bombardier in the Sri Lanka Army Artillery regiment, Dharmasena is 62 in the ITF rankings. “He plays an attacking game. That’s his forte,” said his coach Jagath Welikala. 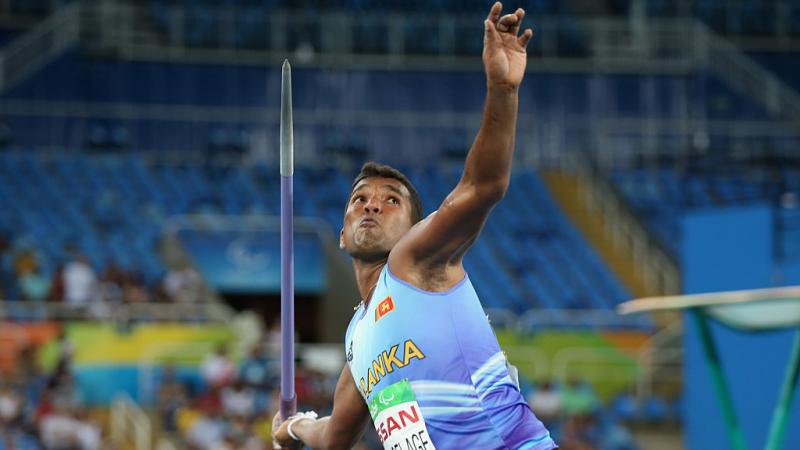 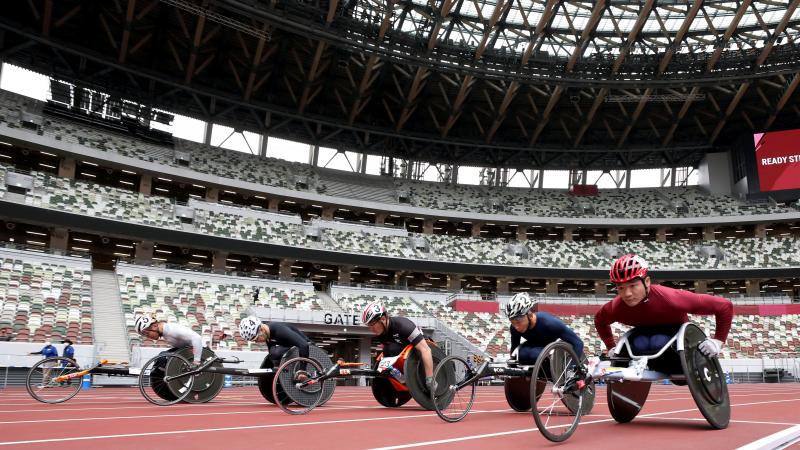