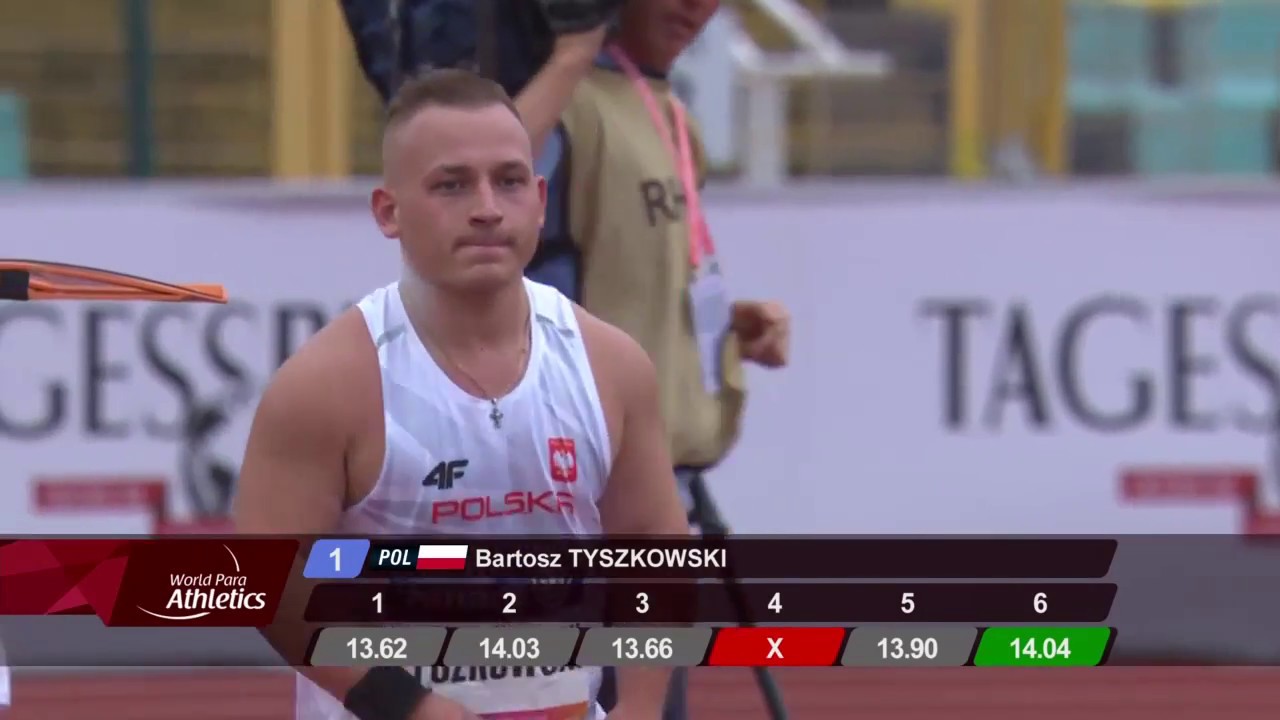 Bartosz Tyszkowski upset home hopes for a golden start to the Berlin 2018 European Championships on Monday (20 August) as he smashed the shot put F41 world record twice on his way to victory – one of three wins by Polish athletes on the opening day of competition.

Germany’s world and Paralympic champion Niko Kappel had arrived in the German capital ranked world number one after setting a world record of 14.02m in June, but that mark fell in the second round as defending champion Tyszkowski threw 14.03m.

The Pole added a further centimetre with his day’s final attempt, finishing with 14.04m, as Kappel settled for silver.

“For me the world record is more important, it’s very nice,” said Tyszkowski. “Niko is a very good player so I’m very happy that I can beat him here.”

Poland’s success did not stop there – Lucyna Kornobys smashed the world record in the women’s shot put F33 with a best of 7.49m, while teammate Aleksander Kossakowski (4:22.45) claimed the first track gold of the championships, the men’s 1,500m T11. The world bronze medallist hit the front with one lap to go before holding on strongly to claim gold.

The Netherlands’ Marlene van Gansewinkel (12.85) was also in superb record-breaking form as she knocked 0.03 seconds off the time she set in June to claim 100m T64 gold ahead of Germany’s Irmgard Bensusan (13.09).

Quickly out the blocks, van Gansewinkel never looked in doubt as she sped home to her first major title.

“I have been feeling good for the past few weeks and I knew I could win here. I hoped for the best and I ended up with a new world record. The wind was just the way you want it so it was perfect. I’ve got the 200m and long jump next and I’m really in a happy place right now, that’s what helps me be so fast,” she said.

Serbia’s Nebojsa Duric (39.84m) added 42cm on to the previous F55 world record as he claimed his first European title in the discus F56.

There was a world record too for Ukraine’s Iana Lebiedieva in the women’s discus F53. The world silver medallist twice improved the previous mark – which had stood for more than 20 years - finishing with a best of 14.93m.

Lebiedieva’s teammate Serhii Bereziuk (4:05.21) claimed gold in the men’s 1,500m T13, while Bulgaria’s Hristiyan Stoyanov (4:08.38) looked determined to go one better than his silver from two years ago as he stormed off at the gun in the men’s 1,500m T46. The 20-year-old put in a solo performance at the front after quickly pulling well clear of his rivals.

Schaer (12:24.47) was in a class of her own as she finished a lap ahead of the chasing pack, smashing her championship record from Swansea 2014.

“It was really good, it was a nice race - we could work together as it was quite windy so we could do some drafting. Over the last two laps I tried to increase the speed and in the end I got it,” said Hug.

“Now I have a good recovery then I have the 800m next. I feel good, I feel comfortable, but I know there are some other strong guys so it will be very difficult to win that race. It will be much tougher than the 5,000m.”

Paralympic and world champion Arnold, who added the Commonwealth title to her list of achievements earlier this year, enjoyed a straightforward win, finishing with a championship record 40.15m.

“This is just a stepping stone ready for next year and Tokyo. I am so excited to get knuckling down for winter training.”