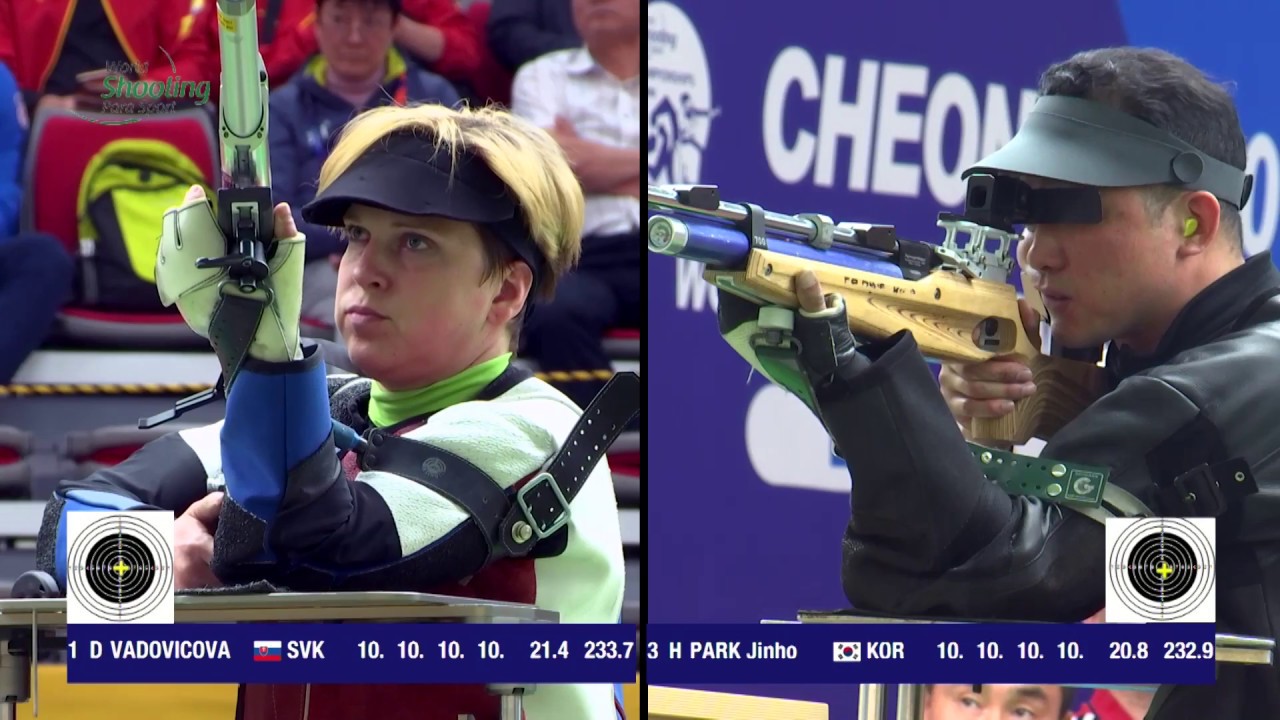 Veronika Vadovicova and Sareh Javanmardi proved why they are defending Paralympic champions on day five (8 May) of the 2018 World Shooting Para Sport Championships in Cheongju, South Korea.

The afternoon session was a milestone one in the 10m rifle event, as Slovakia’s Vadovicova broke her own R3 world record with a score of 255.0.

The final series pitted Vadovicova and Great Britain’s Matt Skelhon against each other for the top prize.

Skelhon – silver medallist from the 2014 Worlds – took a slim lead, before Vadovicova shot a near-perfect 10.8 to overtake him by just 0.1 points. She then sealed gold in style with a world record that had her husband and coach Milan Golena cheering in celebration on the side.

“I am very happy because anyone could have won,” said Vadovicova, who had to settle for silver on Friday in the R2 (women’s 10m air rifle standing SH1).

“I was very calm entering today because I knew I got the quota for Tokyo 2020 in my first discipline for R2. So today I started with a very calm feeling, and I was able to show what I had trained for at home and just tried to enjoy the competition.”

Tuesday’s silver for Skelhon was also a happier ending compared to Monday’s R6 (mixed 50m rifle prone SH1) event, where he did not medal.

“I took yesterday afternoon off, missed PET [training], went back to the hotel, and chatted with some friends, and forgot really all about it and concentrated on today,” Skelhon said.

“I feel absolutely great. I’m happy I managed to win a medal today,” said Skelhon. “I wish I had won it. I’m happy with second.”

For the R3 team event, South Korea won the gold, Australia the silver and Iran with bronze.

Day five started with a dramatic P4 competition, in which Javanmardi was in danger of not medalling at all. But the Iranian climbed from bottom of the standings to third place, before she shot a 10.6 to claim the world title.

“It was a very intense situation but like I said the other day [on] Sunday, I know that I am the gold medallist,” said Javanmardi, referring to her victory in the P2 (women’s 10m air pistol SH1).

The crowd’s claps during the final shot series intensified the atmosphere, and Javanmardi had to hold her focus to top China’s Xing Huang, with a final score of 224.5 to 223.8.

“When I saw that I was on the bottom, there was no stress for me,” Javanmardi said. “I know that final is 24 shots. If I did something wrong in the first five shots, I can compensate for it later. I knew that I can manage everything again.”

For Javanmardi, Tuesday’s win topped off a successful World Championships. She finished with three gold medals in total – including the P2 (women’s 10m air pistol SH1) from Sunday – and a silver in the P4 team event.

Ukraine won the P4 team gold and China the bronze to round off the pistol events at this year’s Worlds.

All finals will be streamed live on Cheongju 2018's website.