Fresh from securing a win at the Bogota World Cup, Italian powerlifter will compete in season's second World Cup A total of 125 athletes from 22 countries will participate from 25-28 March 24 Mar 2021
Imagen 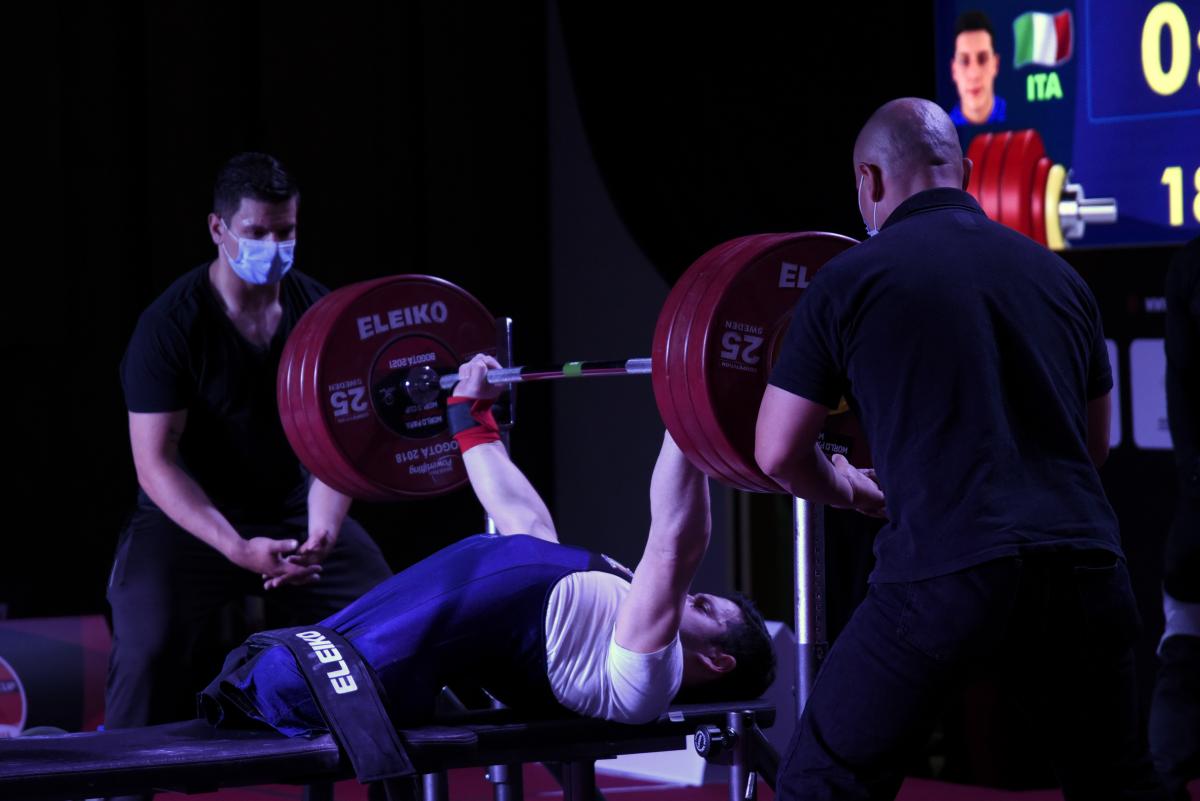 Donato Telesca competing in the up to 72kg category at the first World Cup of the season in early March, in Bogota
ⒸGuillermo Legaria / Getty Images
By Filip Ožbolt | For World Para Powerlifting

The Italian junior world champion and world record holder will be one of 125 athletes from 22 competing in the British city.

“Bogota was a good start considering I had three failed lifts in Manchester's last year's competition,” said the 22-year-old, who won the men's up to 72kg at the season's first World Cup in the Colombian capital.

“I was satisfied with Bogota's result, but I’m confident that I can do better. That’s my every-day goal.”

Telesca has been preparing for the 2021 season for over a year. After a far-from-ideal performance in Manchester last year, he is highly motivated ahead of the event.

“I was fortunate because my national federation gave me a beautiful opportunity a year ago. They provided me with an Eleiko bench press so I could continue training during quarantine. I kept myself busy with training and online lessons at the university,” said Telesca.

“My mental health is not compromised because I live in a beautiful city in the south of Italy where nature is all around me. Clean air helps me meditate and reflect on the last period and my preparation for Tokyo 2020.

“I’m grateful for this opportunity and for being able to compete against the best European powerlifters. I do not know what will happen, but I know that I am not here to play. I am here to achieve my best result and improve my position in the rankings for Tokyo 2020.

“I am sure that other athletes are ready for a strong competition. That’s why I love this sport.”

Telesca has been in the sport for only five years, but he has already sealed some memorable victories, including a silver at the 2019 World Cup in Eger, Hungary.

Despite his most recent results, Telesca remains cautiously optimistic looking ahead to Tokyo 2020.

“I am not the favourite,” he said. “I am the youngest athlete among the world's top 10. There are many strong athletes in front of me and some of them are legends of the sport.

"I am grateful to have an opportunity to challenge them and am sure that I will make everything in my power to take a medal. It is a dream and I am working for it!"

Telesca also believes it is important to accept failure as a path to achieving your goals.

“I think that failure is part of having success. There are a few things you can learn from success, but there are many more that you can learn from failure. (You need to) be better than yesterday in competition, in sport, but most importantly in life.”

Home crowd favourite Ali Jawad will be the powerlifter to look out for in the up to 54kg. A former world record holder in the up to 59kg, the Brit has suffered from a career-threatening flare-up of Crohn’s Disease, an inflammatory bowel condition.

He decided to delay his treatment in order to qualify for the Tokyo Paralympics and showed positive signs by achieving gold at the Berck-sur-Mer 2018 European Open Championships and bronze at the Gold Coast 2018 Commonwealth Games.

Poland's European champion Marek Trykacz will be the man-to-beat in the up to 65kg, while Georgia’s Europeans bronze medallist Akaki Jintcharadze will lead the way in the up to 107kg.

Great Britain’s biggest medal hope is two-time Paralympic bronze medallist Zoe Newson in the up to 41kg, with the hosts also hoping to celebrate gold through Louise Sugden in the up to 86kg.

Ukraine’s Paralympic champion Lidiia Soloviova is the one to watch in the up to 50kg.  Soloviova’s compatriot and reigning world and European title-holder Mariana Shevchuk is the favourite in the up to 55kg.

Also keep an eye on France's world record holder Souhad Ghazouani in the up to 73kg.