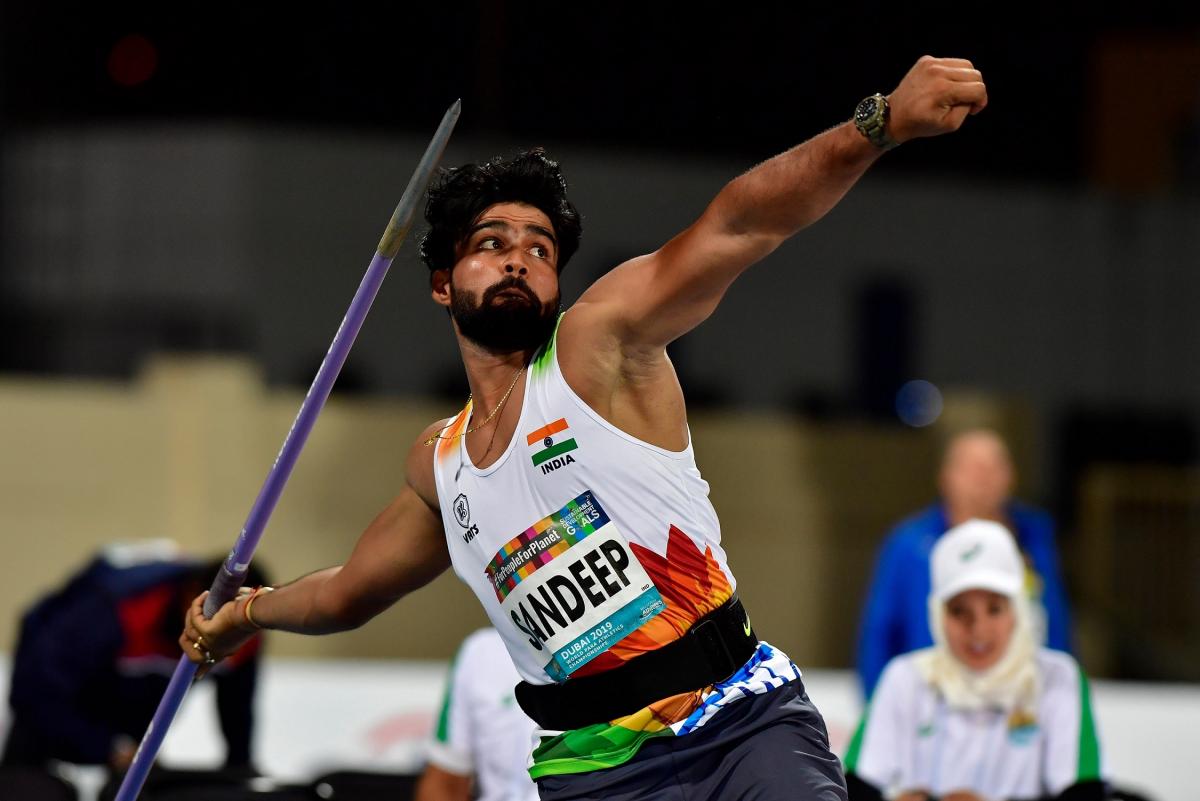 Dubai: It was double delight for India at the Dubai 2019 World Para Athletics Championship as their para athletes claimed top two spots in the Men’s Javelin Throw F64 on day 2 at the Dubai Club for People of Determination on Friday.

Sandeep Chaudhary, with a throw of 66.18m, not only clinched gold but also set a new World Record in the process, eclipsing his own record of 65.8m set earlier this year.

Chaudhary’s compatriot Sumit Antil settled for silver with an effort of 62.88m. The bronze was bagged by Roman Novak from Ukraine with 57.36m.

“I’m really satisfied with my performance as it was my personal best and it is also a new world record. I’m really happy that I made it here,” said a jubilant Chaudhary, who was all praise for his teammate Sumit Sumit.

“Sumit trains with me and he is also doing a really good job. It’s great news for India, World Record and two medals tonight. I’m really happy for him and we are delighted to make our country proud.”

Leo Pekka Tahti of Finland won his fifth world title at the Men’s 100m T54 with time of 13.97seconds. The World Record holder was elated with his effort but acknowledged that this time he was nervous before the final.

“I’m getting nervous and nervous because maybe I’m getting older and I’m getting slower. But of course, I also have some experience and I can also handle the pressure really well,” said a beaming Tahti.

“Now I have a new wheelchair and I got it just three weeks back… maybe that made me a little bit more nervous. I’m still feeling that I had to train more with this new wheelchair,” added Tahti.

The Finn was also of the view that a new era of athletes are coming up the ranks but he is enjoying the transition.

“Now there are so many new guys, there is [Australia’s Samuel] Carter and also the Mexican guy [Cervantes]. It is really cool to see the competition getting tougher. The T54 is one of the most challenging class. In future things won’t be easy for me, I think that gives me an extra motivation to do the small things even better,” asserted Tahti.

The men’s 100m T54 gold from Tahti was not the only one for Finland on day two. Amanda Kotaja also took gold in Women’s 100m T54 with 16.00, establishing a new Championships Record.

Colombian ace Dixon Hooker was in a league of his own in the Men’s 400m T38 as he went on to clinch gold with a time of 51.10 seconds.

This was his fourth medal in World Championships, also ensuring a spot for Colombia in Tokyo 2020 Paralympic Games.

Chessani Garcia from Mexico took silver with 51.91, while the bronze went to M. Chida from Tunisia, who ran in 52.28 seconds.

All results from the Dubai 2019 World Championships can be found on: https://www.paralympic.org/dubai-2019/schedule/

A total of 25 gold medals will be up for grabs on day three in Dubai on Saturday.