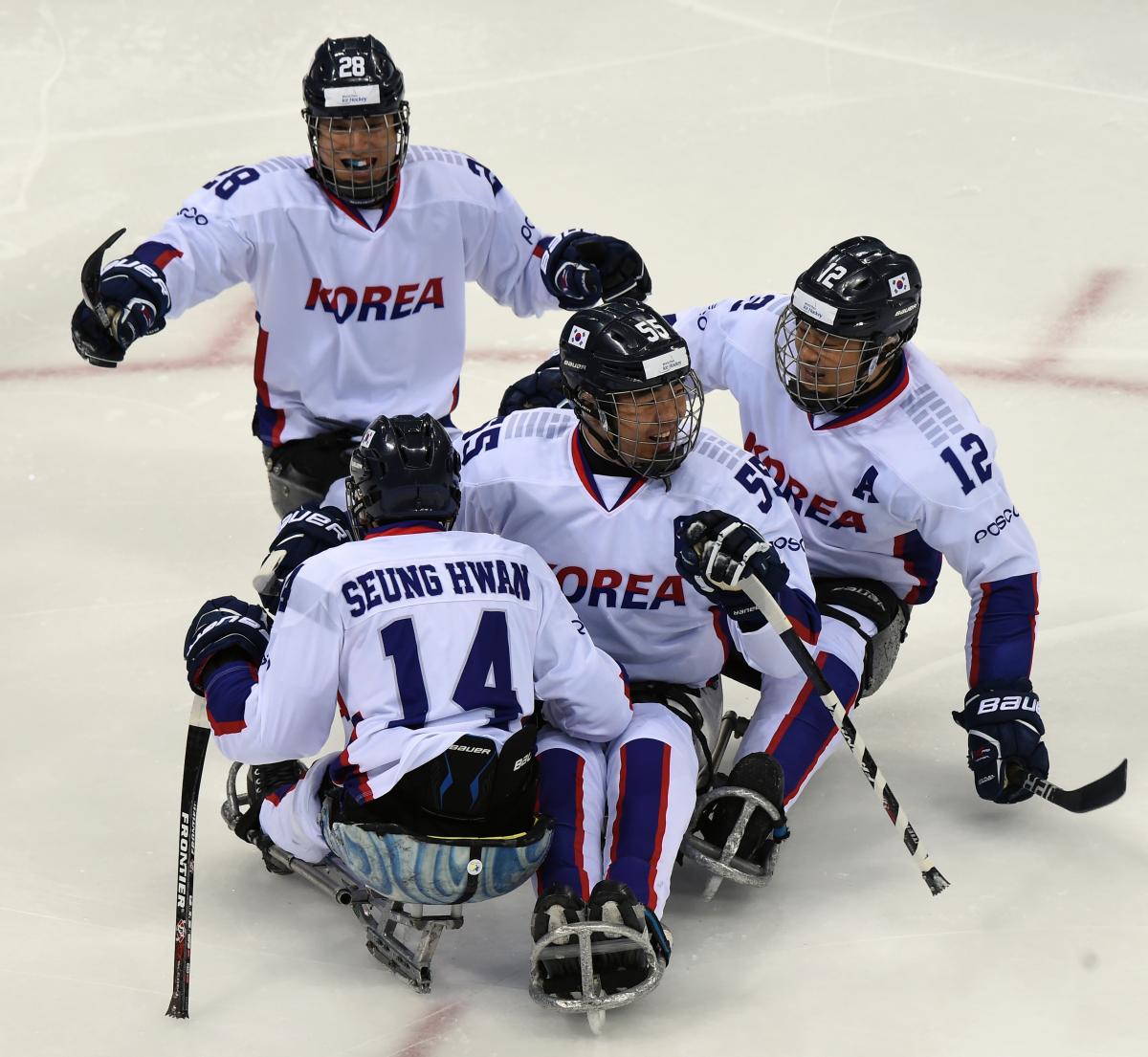 “I’m so excited, I cannot even explain how I feel right now.”

The last of the day’s three preliminary round games at the 2017 World Para Ice Hockey Championships in Gangneung, South Korea, on Friday (April 14) came down to the closing minutes, as the host nation escaped with a stunning 2-1 victory over Norway to remain undefeated in the tournament.

Dong-Shin Jang, a three-time medallist in wheelchair fencing at the Asian Para Games, scored the winning goal with 1:51 remaining in the contest as the crowd erupted.

“I’m so excited, I cannot even explain how I feel right now,” Jang said after skating off the ice. “The head coach changed my position from defense to offense recently, so I knew all the staff believed in me to score. I had patience on the ice and waited for the right pass to shoot, and when I got it, I scored.”

South Korea’s king of speed and hero from the opening night of the tournament on Wednesday (12 April), forward Seung-Hwan Jung, scored the first goal for the home team just 42 seconds into the game. He nicked the puck tightly past the post off a pass from Jong-Kyung Lee.

Rolf Pedersen, competing in his eighth World Championships, levelled the score for Norway when he dished the puck into the net 3:48 into the second period.

Both sides increased their aggressiveness on defense in the final frame until Jang found an open crack to give South Korea the deciding score.

South Korea’s 21-year-old Jaewoong Lee was the winning goaltender with 12 saves over 45 minutes of play, while Norway’s Kjell Christian Hamar tallied five saves on the day.

Canada beat Sweden, 17-0, tying its own record for the most goals scored by a single team in a World Championships game. Although captain Greg Westlake did not tally a point, 11 of his teammates did, with Tyler McGregor, Billy Bridges and Liam Hickey all coming away with hat tricks.

“We just wanted to make sure we did everything right and we stuck to our game plan,” McGregor said. “I was lucky to be here in 2013 for the World Championships as a rookie, and we won then, but it hasn’t happened since then. So we’re excited to get off to a great start this week and hopefully we can get another World Championship, because ultimately, that’s what we’re here for.”

Canada scored its first goal 80 seconds after the puck dropped when Hickey buried a feed from Bridges, who found the net about a minute later on the power play to make it 2-0 to open the floodgates. Forwards Dominic Cozzolino and Bryan Sholomicki followed suit with their first goals, and then Adam Dixon, Ben Delaney, McGregor and Bridges all connected to make it 8-0 by the first intermission.

The second frame was just as busy for Canada, with McGregor, Sholomicki and Hickey all scoring in the first nine minutes before Bridges finished his hat trick to make it 12-0. By earning an assist on Bridges’ goal, Dixon became just the fourth player from Canada to reach the 200-point mark in his national team career.

McGregor and Hickey scored their hat-trick goals two minutes apart in the third period as Dixon added a tally and Brad Bowden and Tyrone Henry put their names on the score sheet before the game’s end. Dixon now leads all players with 14 points in the tournament.

The pride of Quebec, Dominic Larocque, earned his second shutout in as many starts for Canada, while Ulf Nilsson and Andreas Neuman combined for 35 saves for Sweden.

Canada is now in first place in the tournament standings with nine points, followed by South Korea and the USA who both have six points.

The USA put on a dominant display of scoring in its 9-1 victory over Italy. Nineteen-year-old forward Declan Farmer recorded a hat trick for the second consecutive day, surpassing teammate Adam Page’s mark of the most career points by a US player in World Championship play with 24.

Ten different US players tallied points, as Farmer notched four alone in putting on a stick-handling show, and Brody Royal and Josh Pauls each registered three.

“As a team we were able to move the puck around a lot better than we did against Sweden,” Farmer said. “It was a little bit of an adjustment because we faced more pressure from Italy as they’re a physical team. After a while we were able to get our game going, move the puck around and get some shots off, and I thought we played very well out there.

The USA lit up the scoreboard first exactly one minute into the game when Farmer fired a wrist shot into the net off a pass from his linemate, Kevin McKee. Pauls scored his first goal of the tournament 22 seconds later before Roybal made it 3-0 four minutes after that.

Four different players – Billy Hanning, Adam Page, Nikko Landeros and Farmer – found the net in the second stanza as Italy made a double flip in goal, going from Gabriele Araudo to Santino Stillitano and back.

Italy’s Sandro Kalegaris shot the puck just past goaltender Steve Cash's head with 3:54 left in the second to become the first player to score against the USA in the tournament.

But the defending champions kept charging, with Farmer completing his hat trick in the third period and then Landeros tallying his second goal of the contest to bring USA to nine.

All games from the 2017 World Para Ice Hockey Championships are being streamed live, alongside live statistics at www.Gangneung2017.com

Para Ice Hockey
Tyler McGregor: From newcomer to one of world’s best
Imagen