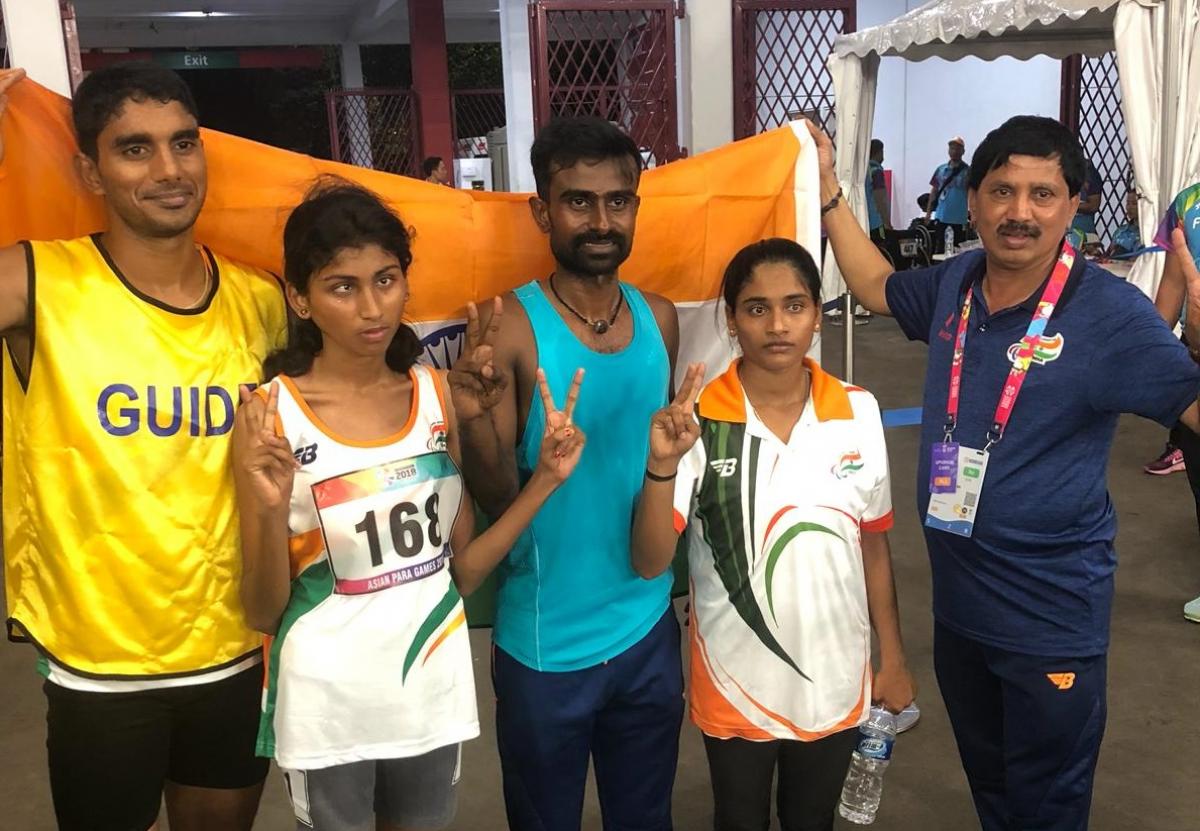 ⒸSteven Glover
By Will Davies | For the IPC and APC

After Sandeep Sandeep broke the world record to take the men’s javelin F42-44/61-64 title during the morning session at Gelora Bung Karno Stadium in Jakarta, Rakshitha Raju followed it up with gold in the women’s 1500m T11.

Fight to the finish

One of the races of the night was the women’s 1500m T12/13 race which was won by Iran’s Ozra Mahdavikiya, ahead of Venkatesh.

Mahdavikiya was leading comfortably from Japan’s Mitsuyo Matsumoto at the start of the final lap, and even more comfortably in front of Venkatesh in third.

But a spirited final lap from Venkatesh put all sorts of pressure on Mahdavikiya, who dug deep to hold out a fast-finishing Radha, win the gold medal and record a personal best time of 5:16.65.

In the sprint to the line, Venkatesh’s guide Rahul Balakrishan was urging her on, and says fans can expect plenty more from the 19-year-old.

“We were finishing with fast speed,” Balakrishan said.

“Every race she does the same thing, from starting she won’t run too fast. She’ll keep her energy.

“She’s more talented. In trials and all she’s run in India (she’s run) five-flat. But in the competition, she’s just following the race. She’s a secret of energy, bursting in the last race.

“Next time she’ll get her (Mahdavikiya), the target is for the Paralympics, in this T12 and she will get the (gold) medal.”

China picked up the first two track medals of the night with Fenfen Jiang winning in the women’s 200m T37 and Xiaoyan Wen taking the silver. Sabina Sukhanova continued a strong day for Uzbekistan, by claiming the bronze medal.

Thailand star Tana Rawat will be looking to rebound in the days to follow at Indonesia 2018 after a tough start, when he was disqualified in the men’s 800m T54 race after being involved in a minor crash.

Day one of Para athletics, and day two of Indonesia 2018, finished in fitting style for the home fans, with Indonesia’s Sapto Yogo Purnomo winning the final race of the night, the men’s 200m T37.