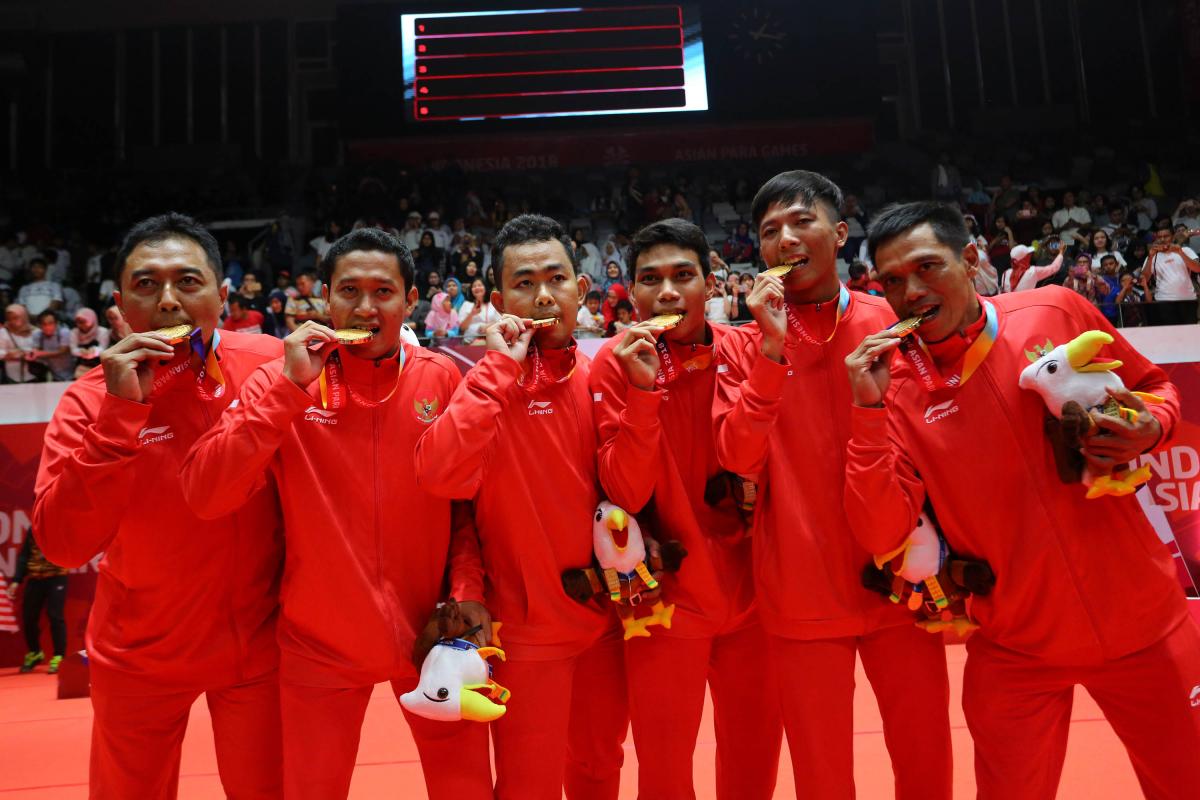 ⒸINAPCOG
By Will Davies | For the IPC and APC

Indonesia have started their home Asian Para Games in the best possible fashion by claiming the first gold medals of the Games, winning the men’s badminton team SL 3 -SU 5.

The hosts beat Malaysia 2-1 in the best-of-three final at the Gelora Bung Karno sports complex in Jakarta on Sunday (7 October), thrilling a boisterous home crowd with their powerful, sharp and composed play.

“That’s very amazing because we got the first medals in Asian Para Games, so maybe we can give spirit for some of the other sports,” said Suryo Nugroho, who helped Indonesia qualify for the final.

“The crowd are very amazing. They were giving more spirit to us so we can and must give our best performance in return for them.”

Setiwa Fredy gave Indonesia a 1-0 lead in the final, keeping Muhammad Norhilmie Mohd Zainudin at bay in the opening singles match, despite a series of great points.

Malaysia’s doubles pairing of Cheah Liek Hou and Hairul Fozi Saaba then levelled proceedings at 1-1 after getting the better of Indonesia’s Prawiranegara Hafizh Briliansyah and Susanto Hary.

The Malaysian duo were sharp and strong from the outset, taking the first set 21-10, before finding themselves locked in a real tussle in the second.

Indonesia looked to have found a commanding rhythm but Malaysia were able to outlast their opponents in some epic rallies and eventually win the set to force a final singles match.

In that deciding singles match, Anrimus Dheva took on Malaysia’s Mohammad Faris Ahmad Azri, and from the outset, had most of the answers.

Despite Ahmad Azri digging deep and forcing the best from Dheva, the Indonesia was equal to the challenge and won the match 21-6, 21-12, sparking huge celebrations from his team and the Indonesia fans.

For Malysia’s Hou, a silver medal was a big reward.

“It’s tough for us to win the gold medal because the deciding game, the Indonesian guy is more powerful than us and stronger than our Malaysia team,” he said after the doubles.

For Nugroho, one of the best singles players in the world, he is hoping the ultimate prize in the team category can help drive him towards individual success too.

“I have a gold in this one, so I now must think about my individual event, so I can focus on that. This will motivate me though, of course,” he said.

“Maybe this is my target, to go the final, but also I can’t think about the win or loss, I must go all out to play.”

Beaten semi-finalists India and Thailand took home the bronze medals in the team event, with no third-placed match taking place.