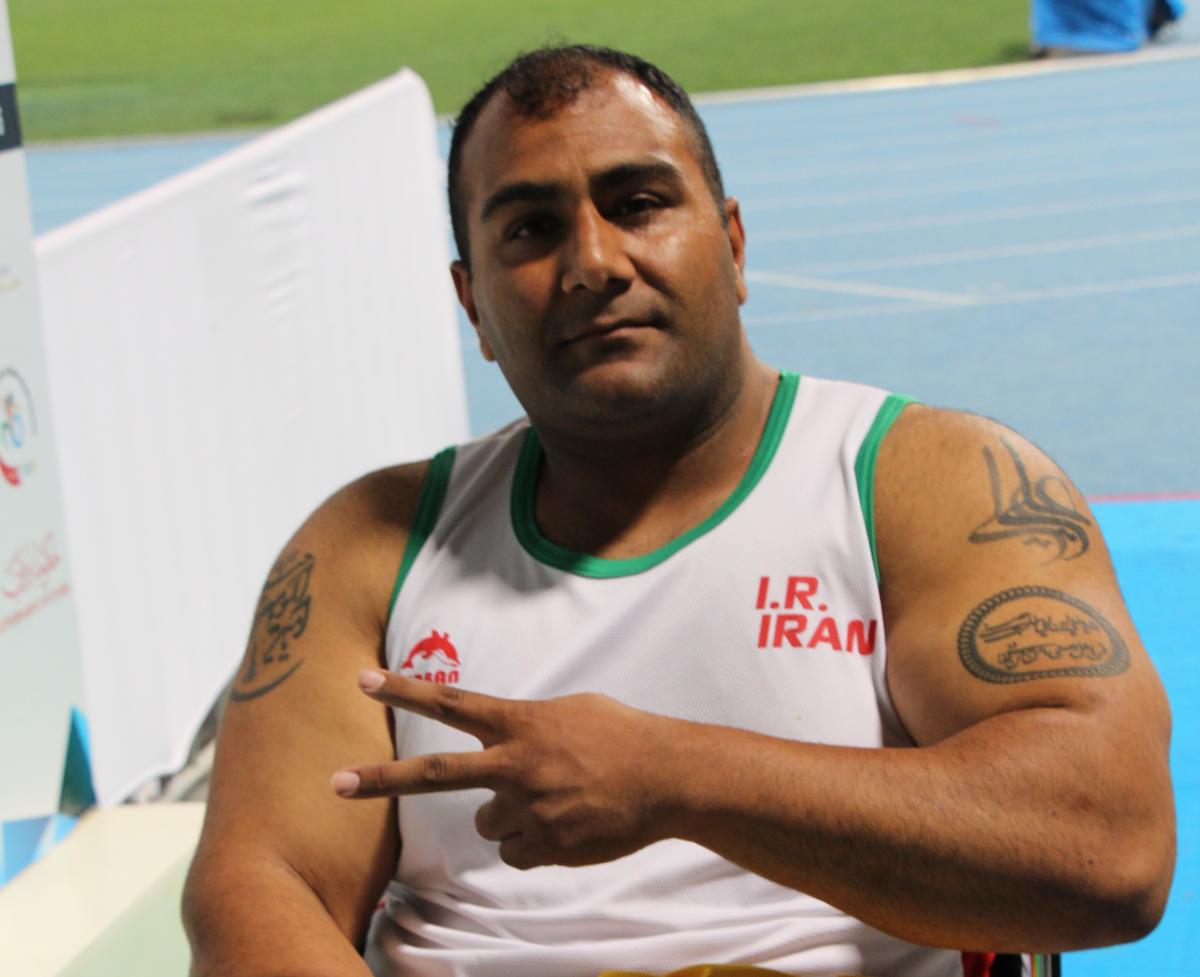 “I am happy to get four medals. This is good preparation for me for the road to Rio.”

Eight Asian records fell as Iran picked up a further five gold medals to extend their lead at the top of the medals table on the fifth day at the 2016 IPC Athletics Asia-Oceania Championships in Dubai, UAE, (Friday 11 March).

Hamed Amiri (F54) completed a hat trick of gold medals at Dubai 2016 in emphatic style as he won the shot put F53 with a new Asian record at the city’s Dubai Police Officer’s Club stadium.

The 33-year-old threw 9.69m (940 points) - adding four centimetres on to the F53 Asian record -in the fourth round to take the title ahead of his compatriot Alireza Mokhtari Hemami (F53), who managed a best of 7.61m.

Hashemiyeh Motaghian Moavi (F56) smashed the Asian record to win the women’s discus F54-57. The world finalist added an impressive 1.30m on to the mark she set in Qatar last year with a best of 20.83m (890 points).

Qatari Sara Hamdi Masoud (F33) added an impressive 19 centimetres on to the Asian record as she took gold in the women’s shot put F32-34. The 29-year-old double Asian Para Games champion was consistently on form with three throws over the 4.60m mark – her second round mark of 4.75m (613 points) was the best of her six attempts.

“I am so happy, I won a gold medal in Incheon 2014 and am qualified to the Paralympic Games in Rio, I hope to win there and I am so proud to succeed today,” she said.

In the same event Emirati Noura Alktebi smashed the F32 Asian record, adding nearly one metre on to her previous best with a throw of 4.39m (436 points).

Malaysia picked up their fourth gold medal of the Championships as Nasharuddin Mohd smashed the Asian record in the men’s 400m T20. The 21-year-old’s graceful running made it look easy as he crossed the line in 50.30.

The 30-year-old – who won the 200m T42 at Dubai 2016 earlier in the week – was determined to clock a fast time as he prepares to go for gold at this year’s Paralympic Games. And he managed just that, crossing the line in 12.62, just 0.01 outside Yamamoto’s Asian record set at the Worlds last year.

“Getting a good time was important for me today to get to the Paralympic Games in the 100m. I want to improve my time even more in the lead up to the Games so I can really do something there and win a medal.

“I was in the outside lane today so wasn’t able to fully show my skill – I could have gone even faster. I lost to Atsushi in the 100m at Incheon 2014 but I am not worried about this rivalry now. I am looking at the rest of the world and want to beat Scott Reardon, the Australian world champion.”

The celebrations continued for Sri Lanka as Ajith Hettiarachchi immediately followed up with another track gold, winning the 100m T44 in 12.30.

Kuwait’s Hamad Aladwani’s (T53) tactical nous paid dividends as he came out from behind the UAE’s Badir Abbas Alhawasin (T54) coming off the final bend, speeding past to take gold in the men’s 800m T54 in a time of 2:04.17.

“The race was very difficult and I was in second place for most of it, but I let Alhawasin do all the hard work at the front. I am so proud to win here at the first Asia-Oceania Championships, especially as it is in the Gulf area,” he said.

The UAE’s Mohamed Hammadi notched up a spectacular fourth gold medal at Dubai 2016 with a win in the 100m T34. The victory rounded off a prolific week for the 30-year-old world silver medallist.

“I am happy to get four medals. This is good preparation for me for the road to Rio,” he said.

“I was able to check how things are going for me technically in my start and so it was useful. I am focussing on training too.”

India picked up two gold medals in the field as Jaideep Jaideep won the men’s discus F42 with 37.75m and Santhamuthuvel Kesavan took the discus F44 title with a best of 38.13m.