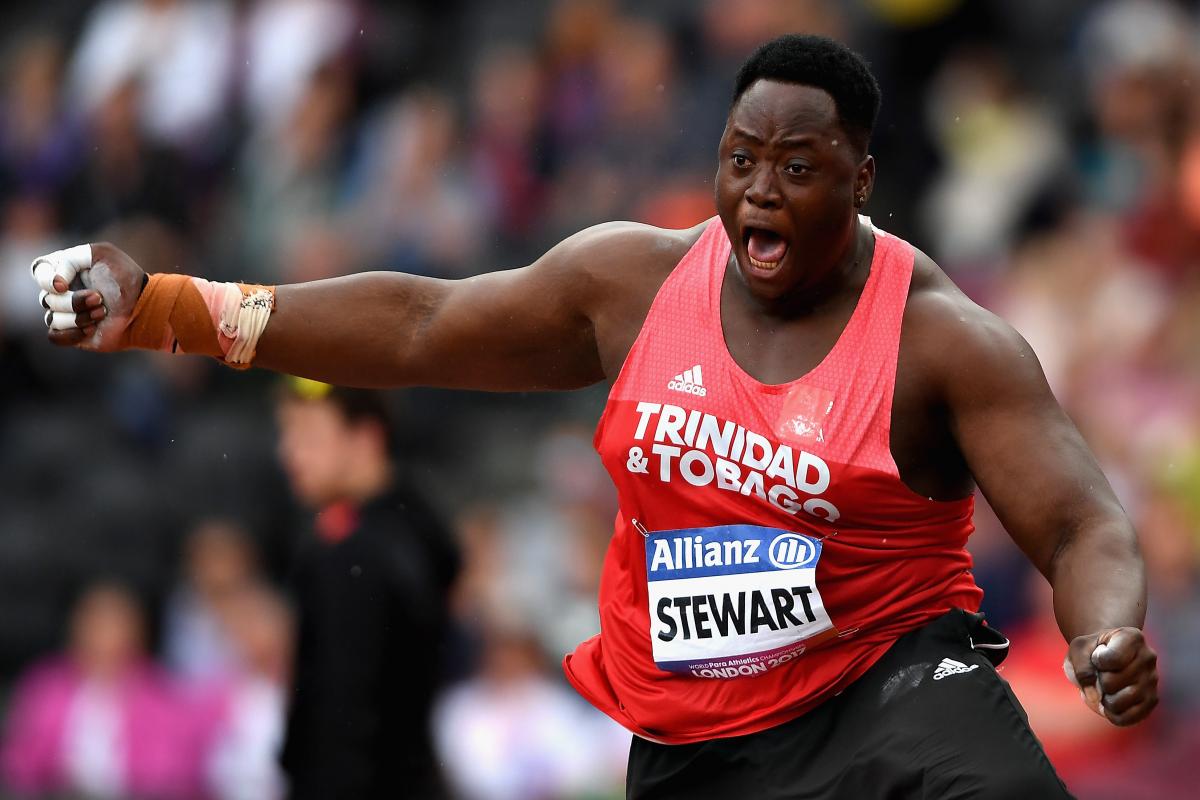 Akeem Stewart of Trinidad and Tobago lets out a roar after smashing the shot put F43 world record.

Trinidad and Tobago’s Akeem Stewart claimed his second gold medal of the World Para Athletics Championships with a record-breaking throw in the men’s shot put F44 on Sunday (23 July), the final day of competition in London, Great Britain.

The 25-year-old is one of only four Para athletes from the Caribbean island competing in the capital but together Stewart and his teammate Nyoshia Cain have won a remarkable three medals.

Winner of the javelin F44 title on Tuesday (18 July), Stewart – an F43 thrower - quickly made his presence known in the shot put competition with an opening effort of 18.34m. The distance was nearly four metres further than the previous record of 14.21m set by Germany’s Jorg Frischmann 20 years ago.

In the fourth round Stewart excelled with a massive 19.08m.

“This was a dream come true. I finally had an opportunity to do the shot put in a championships, so I’m really happy. The javelin is a hobby, but this is what I can do when I train for it,” said Stewart.

“I wanted to break the world record to write my name in the record books, but I didn’t think I’d break it by so far. I had to settle for fifth in the discus but I’m going to come back and win that too.”

Canada’s Brent Lakatos joined the exclusive club of athletes to win four individual titles at London 2017 with victory in the 100m T53.

The 37-year-old sits alongside the USA’s Tatyana McFadden and Tunisia’s Walid Ktila at the top of the medals table after getting the better of home favourite and London 2012 champion Mickey Bushell in the 100m, crossing the line in 14.52.

"I'm so happy to have got that fourth gold. It has been an amazing week and better than I expected. As soon as I walk into this stadium with 20,000 people, I get a smile on my face. It's easy to get the energy up,” said Lakatos, who has won a phenomenal 11 world titles overall.

Gold did go the way of the host nation as Samantha Kinghorn (16.65) won the last track event of the morning session, the women’s 100m T53.

The Scot has been in terrific form all season, setting world and European records as well as winning 200m T53 gold earlier in the week – although crossing the line she still didn’t seem aware that the title was hers.

“I literally had no idea. I was just staring straight down as I crossed over the line, I heard the roar of the crowd so I knew I must have medalled but I had no idea where position,” explained Kinghorn. “I can’t believe I’m double world champion; It’s absolutely incredible.”

China’s Lu Li (57.23) ran a superb final 80m to take the win in the women’s 400m T47 after early leader Anrune Liebenberg of South Africa, winner over 200m on eight days ago, faded down the home straight. Ukraine’s Ihor Tsvietov (12.38) clinched double sprint gold in London, storming home to win the 100m T35 despite a poor start out of the blocks.

Portugal’s Cristiano Pereira struck out early on in the men’s 5,000m T20 quickly establishing a substantial lead. Soon 100m out in front of the chasing pack, the question remained – could he maintain his impressive pace?

With eight laps to go US track star Brannigan, who has already won the 800m and 1,500m T20, attempted to close the gap. The 20-year-old world record holder stretched the rest of the field out behind him, but Pereira couldn’t be caught.

As the laps counted down the Portuguese man never let up and he crossed the line with a new championship record of 14:29.80, with Brannigan (14:39.87) taking silver and Ukraine’s Pavlo Voluikevych (15:01.59) winning bronze.

“I am very happy. I planned to go hard at the front. I was hoping to break the world record but anyway the gold medal is great,” said Pereira.

The USA’s Taleah Williams won a thrilling long jump T47 – before dashing off to compete in the 400m. The 20-year-old, who only took up Para athletics one year ago, leapt 5.27m in the fifth round before passing her final attempt to go and race over one lap.

The final round saw Great Britain’s Polly Maton catapult in to second place with a personal best 5.23m as Frenchwoman Angelina Lanza finished with a jump of 5.22m for bronze. New Zealand’s Paralympic champion Anna Grimaldi lost out on a medal just one centimetre further back in fourth.

As for Williams, her efforts to double up proved in vain – she was disqualified from the 400m for a lane infringement, but was still able to celebrate her first world title.

“I have never had to run the 400m and do the long jump on the same day before. It was nerve-racking,” said Williams, who had to leave the long jump before the competition had ended.

“It was definitely a challenge and really hard. They helped me a lot to get my jumps in. The adrenaline also helped a lot. But the long jump is my favourite event and it was hard leaving early.”

“It’s unbelievable to do this at my first World Championships. So many people have made this possible for me. We worked very hard and came in good shape but I am just happy I could throw my best here,” said the 31-year-old, who struggled to contain his emotions after the event.

“It is a such a privilege to do it in this country. It is an honour to win here. It may sink in at some point but at the moment I can’t really take it in.”

Best of the field

There was a new championship record too for Lithuania’s Mindaugas Bilius, who improved on his silver medals from the last two World Championships with gold in the shot put F37.

“Finally, we get the medals for our team and finally it is gold from the World Championships. I have already collected titles from the major events but I was missing this one. It was the main motivation in the training and the whole season,” said Bilius, who won Paralympic and European gold last year.

“Maybe I feel even happier for my team mate Donatas than for me. It is great we both get a medal – gold and bronze. We practice together and we are good friends. We have a good coach which is the key thing to perform well.”

Colombia’s Paralympic champion Mauricio Valencia (35.21m) added the world title to his collection thanks to a season’s best throw in the javelin F34.

“I got bronze in the shot put and I am really happy to give my country another medal, especially gold. Javelin is my favourite event out of the two which is really good as in Columbia they are really pushing the sport,” said Valencia.

Greek Paralympic champion Manolis Stefanoudakis (29.51m) has dominated the javelin F54 for the last two years, and he was at it again, safely defending his world title with a championship record nearly two metres clear of the field.

Results went to form in the men’s discus F46 as China extended their lead at the top of the medals table with gold and silver. Defending champion Zhanbiao Hou (48.42m) finished top, with teammate Enlong Wei (48.10m) claiming silver to add to the shot put title he has already.

The World Para Athletics Championships closes on Sunday (23 July). More than 1,150 athletes from 90 countries are competing in 202 medal events. 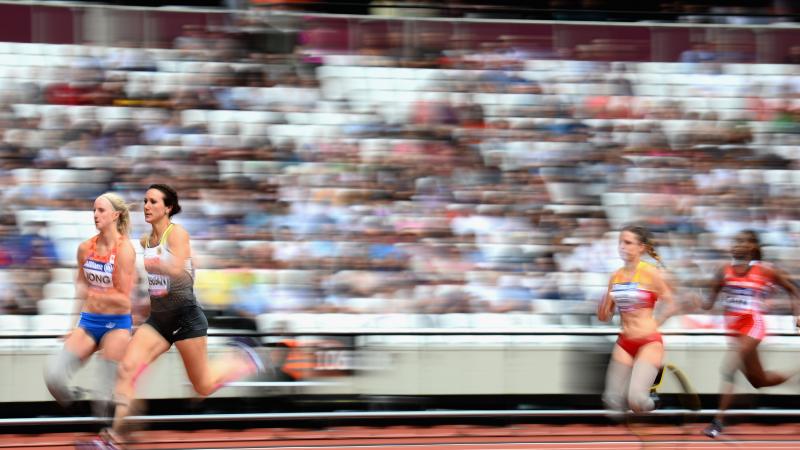