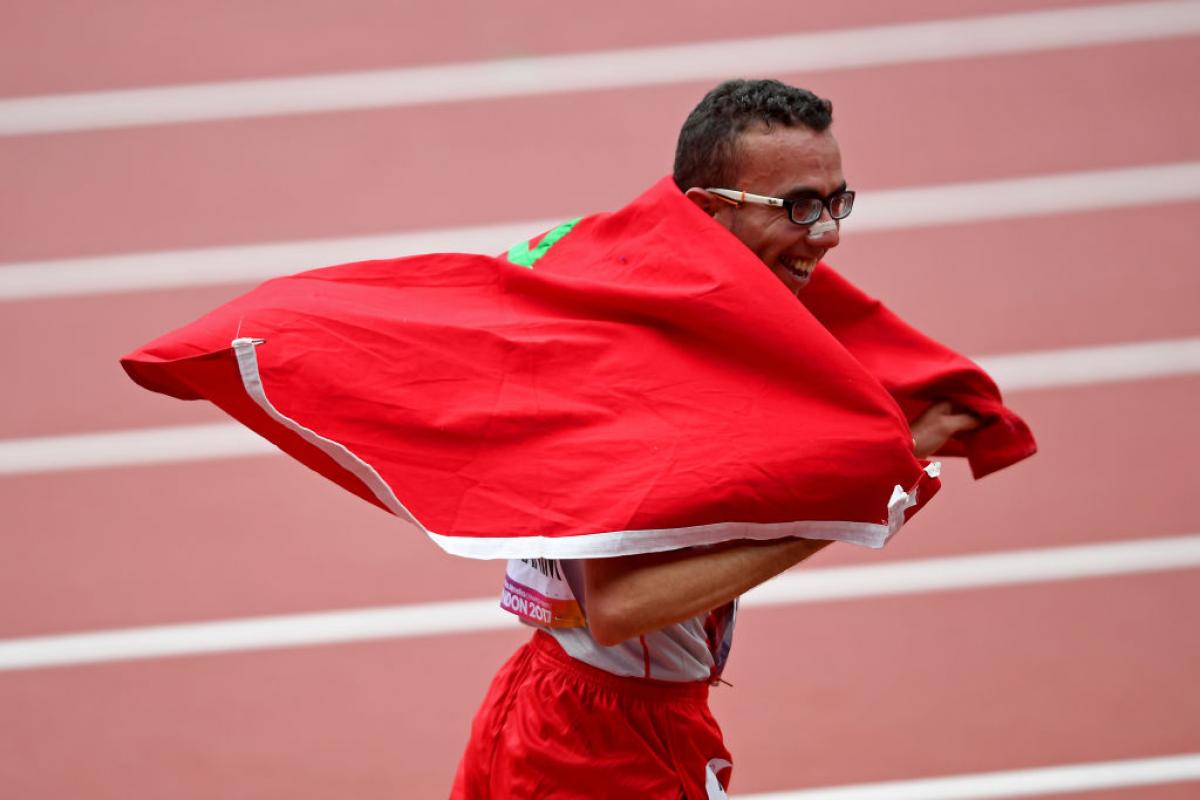 The 33-year-old has finished on the podium at each of the last three World Championships but this time there was no denying his determination to make it to the top as he held off Tunisia’s Paralympic bronze medallist Bilel Aloui in a terrific sprint to the line, finishing in 14:20.69.

Morocco’s El Amin Chentouf had led for much of the race, having set a fast early pace, but with two laps to go and the pressure starting to mount he dropped out, leaving Benibrahim with a perfect opportunity to go for gold.

With Aloui chasing hard round the final bend the race was on – but Benibrahim’s long stride carried him over the line as Aloui eased up, knowing gold was out of his reach – he finished in 14:21.69, while bronze went to Canadian Guillame Ouellet (14:23.24).

“This is a great birthday present, a little bit in advance. All my preparation was about winning a medal here in London, I did not think about the world record at all. So I am very surprised and blessed. My wife is pregnant so I want to dedicate this victory to her and also to my coach and my mother,” said Benibrahim, who knocked 13 seconds off Aloui’s world record mark set at Rio 2016.

The USA meanwhile claimed two gold medals out in the field thanks to two defending champions – Jeremy Campbell and Lex Gillette.

Campbell secured his third consecutive world title in the discus F44 back in the arena where he claimed Paralympic gold five years ago.

Fellow American Dave Blair – who won the Paralympic title at Rio 2016 – had opened with 62.47m but in the third round Campbell took the lead with 63.31m. The 29-year-old sealed the win with a championship record 63.66m with the final throw of the competition.

"It is nice redemption after Rio 2016 (Campbell finished fourth). I wanted another gold and it's great to get three consecutive world titles. After Rio, I backed off and focused on having fun. It’s a great American duel (with Blair) and there is a lot more in it for both of us," said Campbell.

It was a similar story for Lex Gillette who also completed a hat-trick of world gold medals, having won the men’s long jump T11 in 2013 and 2015. Gillette, 32, also defeated Brazil’s reigning Paralympic champion Ricardo Costa with his winning leap of 6.27m.

“"I am really happy. It has been a difficult time in the last year but to have a good series of jumps today means a lot,” said Gillette.

Ukrainian Ruslan Katyshev and Costa both leapt a best of 6.21m but it was Katyshev who took the silver having recorded the next furthest jump.

Great Britain’s Aled Davies’ grip over throwing events continues as the 26-year-old took gold in the discus F42, throwing a championship record 51.54m - nearly five metres ahead of his rivals.

“I was out there with five guys and as soon as we step into the cage we’re all in the same boat, anything could happen, so it’s never easy. But I’ve been here so many times, in this stadium, with this crowd, I’m always confident,” said Davies, who won London 2012 Paralympic gold.

“This brought back so many great memories. It was at 10:00 on a Sunday morning here five years ago that I won the discus at London 2012 and here I am again. It’s quite overwhelming to be honest.”

The Welshman has his sights set on completing the ‘treble double’ in London, having won discus and shot put gold at the last two World Championships, and you’d be a fool to bet against him completing the set.

“Now this is behind me, in the shot on Saturday (23 July) you will see something special,” he added.

Algeria’s Kamel Kardjena reclaimed the title he won back in 2013 with a win in the men’s shot put F33. Paralympic champion here in 2012, the 36-year-old finished with a best of 10.43m – just seven centimetres further than Germany’s Rio 2016 champion Daniel Scheil.

“After such a long time I’ve got my title back. It’s been a long time working for this with my coach. I’m so happy to get this medal here because I love London. It’s my second gold medal here after winning the Paralympics here in 2012,” said Kardjena.

Australia’s James Turner has been in terrific form this season clocking world leads in the 200m, 400m and 800m T36 and he showed his class yet again, knocking 0.14 seconds off the previous world record in the heats of the 200m T36.

“When I heard the words ‘world record’ I was very confused. I looked up and thought ‘What the hell?’ It gives me great confidence for the final. I just hope I haven’t burned myself out. I slowed a bit at the end too, so I must have been going pretty quick at the start which was my aim,” said the 21-year-old, who only made his senior international debut last year – when he won 800m T36 Paralympic gold. The 200m T36 takes place on Monday (17 July). 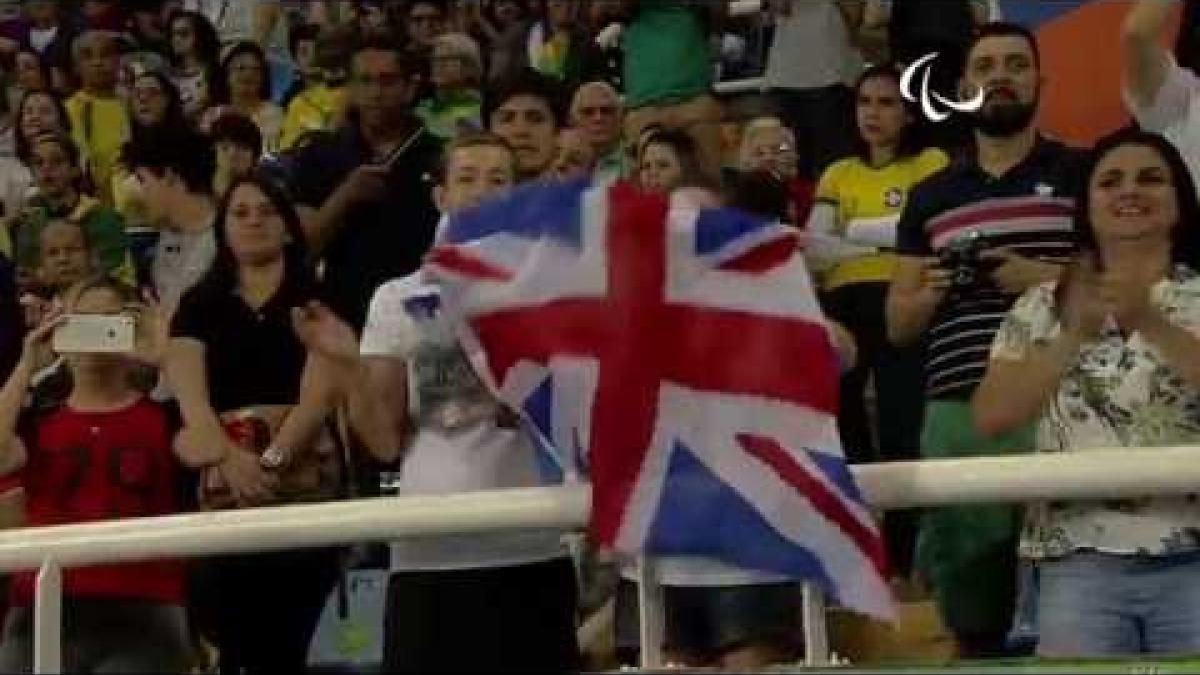 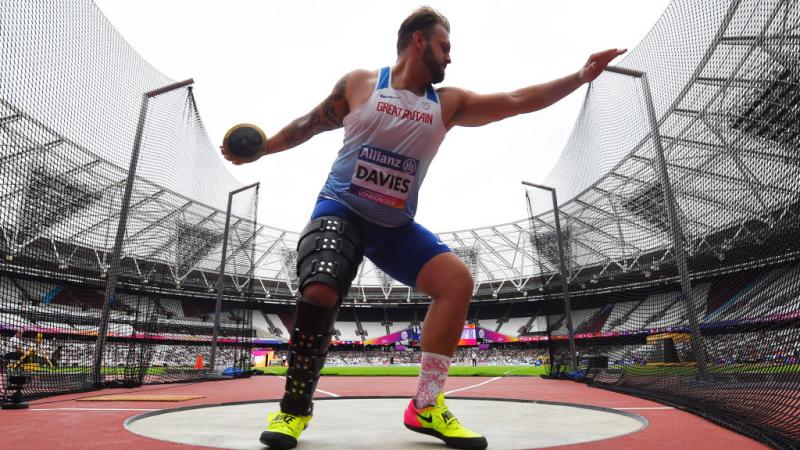