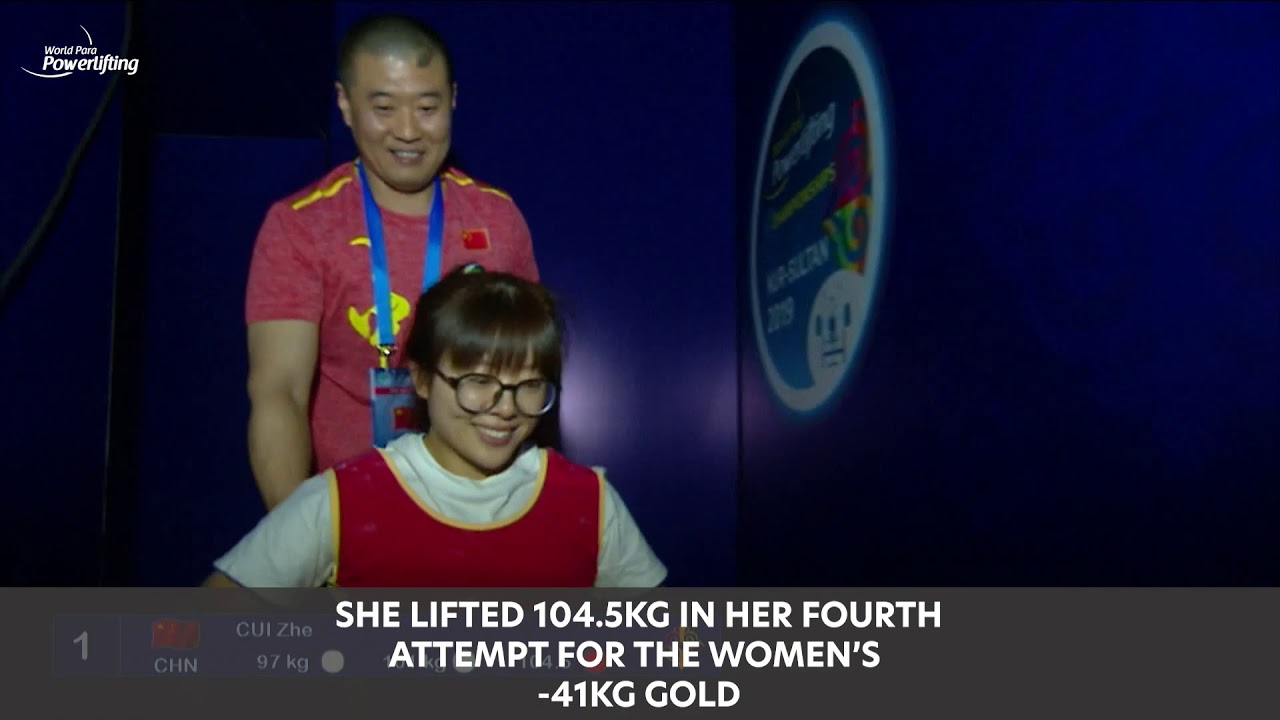 “A strong mentality and courage are the most important things in powerlifting. I hope I can stay positive and do even better. I wish to get a world record in the Tokyo 2020 [Paralympic Games] as well.”

Two world records fell on a thrilling opening day of the senior World Para Championships with Chinese powerlifters stealing the show with powerful performances in Nur-Sultan, Kazakhstan, on Saturday.

Lingling, like Zhe also a champion at Mexico City 2017 World Championships, opened with a 114kg lift to zoom to top after the first round. She came out fearlessly for her second attempt and convincingly lifted 117kg to break her own world and Asian record of 115kg set at the Indonesia 2018 Asian Para Games last October.

Far from satisfied, she went for 1 kg more in her third attempt and emerged successful. When asked what motivated her for back-to-back records, Lingling said: “I wanted to prove myself that I am the strongest in my category. I am very happy that I could do it again and again.”

“A strong mentality and courage are the most important things in powerlifting. I hope I can stay positive and do even better. I wish to get a world record in the Tokyo 2020 [Paralympic Games] as well,” said the Chinese star.

Lingling was followed into the podium by Turkey’s Paralympic champion Nazmiye Muratli who pushed 116 kg for an European record, and Nigeria’s Latifat Tijani who succeeded with 105 kg.

Before Lingling’s incredible show, Zhe showed indomitable spirit to set a world record in her fourth attempt. Despite a failed third round, Zhe kept her spirits high and went for the record in the fourth round only to clear the bar at 104.5 kg.

The Indonesia 2018 champion, whose effort broke the previous record of Turkey’s Nazmiye by 5 kg, finished ahead of fellow powerlifter Li Jinyun who pushed 92 kg for the silver followed by Syria's Noura Baddour (90 kg).

“I have worked hard in the last two months for a good result here. And I couldn’t have asked for anything more. It feels great; I am very happy that I could achieve my goal in this championship,” Zhe said.

The 32-year-old believes that the performance in Nur-Sultan will boost her preparation for the Tokyo 2020 Paralympics.

“I will try my best to get a gold this time at the Games,” said the three-time Paralympic silver medallist.

The men’s up to 49kg event turned into an intense drama, with Russia’s Vladimir Balynets emerging the winner with a lift of 173 kg in his third round.

The London 2012 silver medallist, who was in third place after his second round 167kg lift, slowly made his way to the top, thanks to his self-belief.

The Russian toppled Jordan’s Omar Qarada and China’s Zheng Yu who failed in their third attempts for 176kg. The duo finished second and third respectively, on 172 kg.

“I hoped, believed and I made it. I had faith in myself, Almighty and my coaches. I was focused to do well today,” said Balynets, whose efforts also broke the European record.

“I have prepared for the event starting of this year and I am happy to achieve my goal here.”