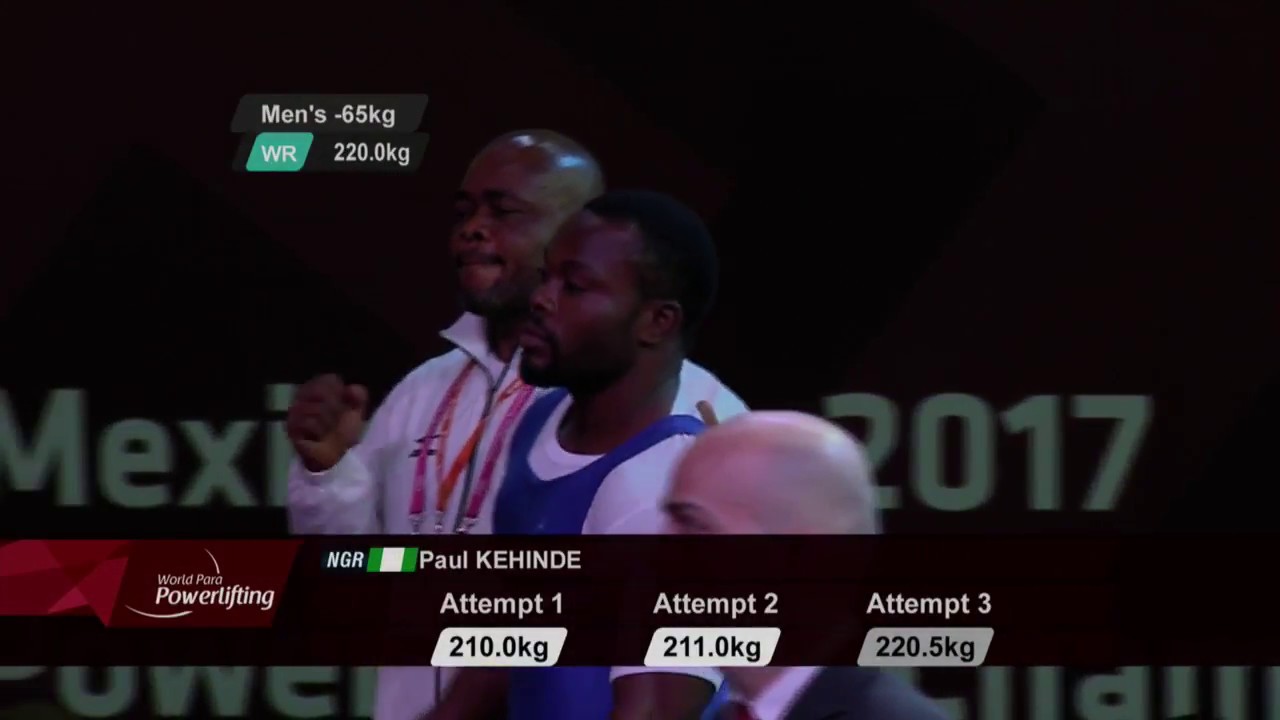 Reigning world champion Paul Kehinde has already packed a lot into his Para powerlifting career. He was excelling in the up to 72kg class - winning a gold medal at the Glasgow 2014 Commonwealth Games – but then made the tough decision to drop down a weight category, to up to 65kg, to try and achieve his ultimate dream - that of world and Paralympic champion.

“I chose to drop the weight from 72kg to 65kg after 2014, because of my confidence level and fitness shape at that time,” he said. “It was very difficult to move down a category. When you do that, you need to reduce body weight. Losing weight is not easy, because it is then hard to keep the strength to lift a nice, heavy weight.

“But it has helped my lifting, because sometimes when I gain weight, it makes it harder for me to work out. It makes me a bit more lazy! So going down a category has been good for me.”

The rewards soon followed. At Rio 2016, Kehinde became Paralympic champion. A year later, at the 2017 World Championships in Mexico City, he added world champion to his list of honours.

“They were great experiences,” he reflects now. “I had real determination to become world champion, which I did, and I was very excited winning gold in Rio de Janeiro. I fulfilled my dream of becoming the world record holder in the 65kg category and became the best athlete in Nigeria in 2016 – both in Para sports and able sports.”

He has got stronger through his career, too – pushing 221kg in Glasgow, and 224kg in Mexico. Kehinde is now set on his next mission.

“I am feeling right, training three hours a day, and it is going well. I’m working very hard ahead of Nur-Sultan. My aim, as always, is to do what I know how to do best – and to try and add some kilograms to my world record.

“I know I can break the world record again, because I’m the one who set it, and I believe by the grace of God, I’m going to add kilograms. I want to set a record that nobody will be able to break.”

Kehinde, now 30, is then considering going back up a category, to target records there. “l want to rule 72kg, too,” he said with a smile.

When he’s not competing, Kehinde is using his profile in Nigeria to help others.

“I have advertised powerlifting a lot. In fact, I have the Paul Kehinde Foundation, and I’ve opened a webpage for Para powerlifting. I have also introduced and also encouraged a lot of new powerlifting athletes. They are going to be tomorrow’s champions in Nigeria.

“Powerlifting is looking good in Nigeria now, because our president, Queen Uboh, is always hosting competitions to encourage the younger generation. In Nigeria, we are disciplined, determined, and train hard, like there’s no tomorrow! It gets you there.

“When I’m not lifting, I do a lot of community engagements and public speaking to encourage others. Truly there is no excuse not to achieve your dreams. I use myself as a case study to encourage others. In the future, I would like to become a coach so that I can build champions like me. I want to keep my records in Nigeria!”

It’s this attitude that can keep him at the top in Nur-Sultan and beyond, he believes. “I love challenging people. That is why I am a champion today.”