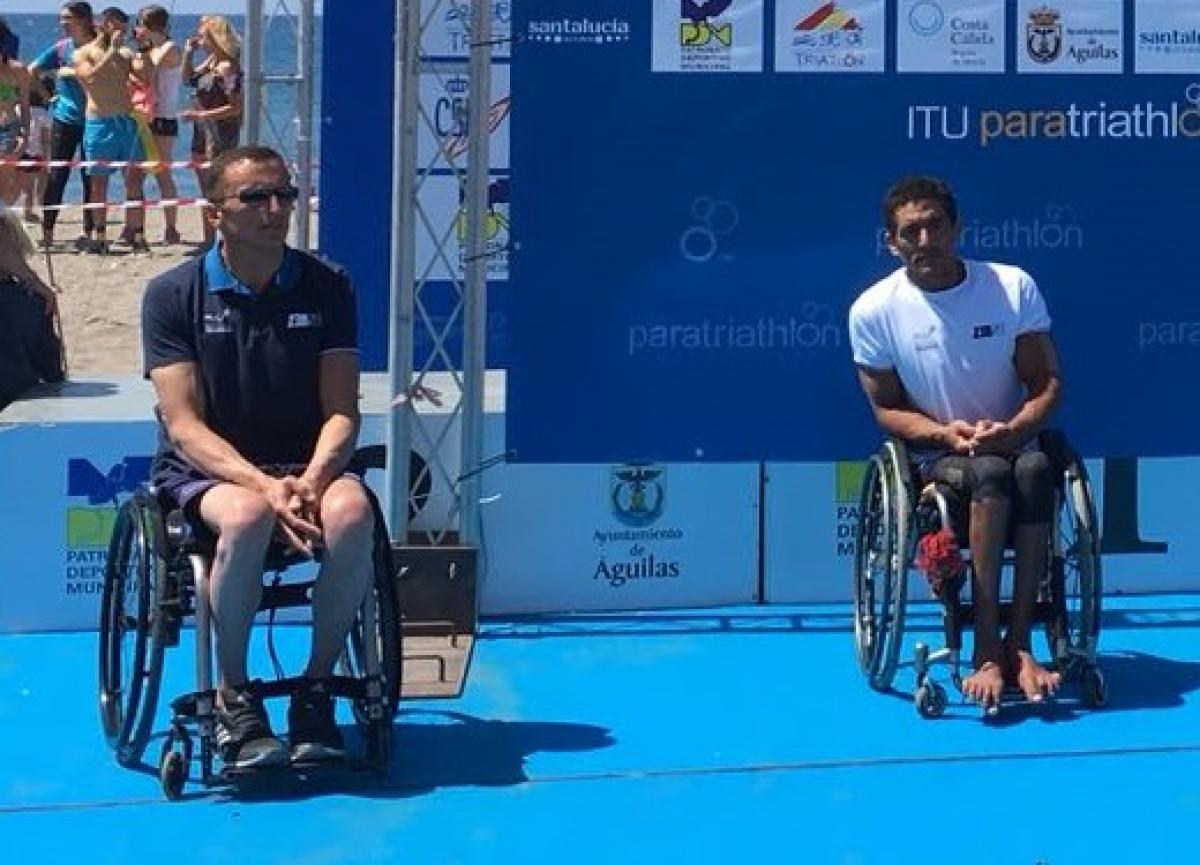 ⒸInternational Triathlon Union
By Adam Bailey | For the IPC

The world’s best Para triathletes will take their final test before the 2018 World Championships, when the World Cup in Lausanne, Switzerland, takes place on Saturday (18 August).

Lausanne – the host of next year’s Worlds– is the sixth and penultimate World Cup of the season, and France’s Alexandre Paviza and Ahmed Andaloussi will renew their rivalry after some great battles between the two in the men’s PTWC.

Andaloussi was victorious at World Cups this year in Aguilas, Spain, and Besancon, France; while Paviza finished second in both. But the places were reversed at the Edmonton World Series last month in Canada, with Paviza claiming his first international win.

Antonio Daniel Muller – a former German athlete competing under the International Triathlon Union (ITU) flag – could contend with the Frenchmen after winning the Magog World Cup in Canada. But Japan’s Jumpei Kimura will be also be one to watch following his fourth successive Asian title.

Another thrilling battle is expected in the men’s PTS2 with two of last year’s Worlds medallists lining up. Great Britain’s world champion Andy Lewis was unbeaten in international triathlon since 2016, until he was edged into second by the USA’s Mark Barr at the Iseo-Franciacorta World Series in Italy. Another second-place finish at the European Championships a few weeks later means Lewis will be even hungrier for gold.

France’s PTS3 world champion Elise Marc has had a busy year, finishing top of the standings in all four of the races she has competed in, and has every intention of keeping that up in Lausanne.

Fourteen athletes will battle for the podium in the men’s PTS4, including world and recently-crowned European champion Alexis Hanquinquant of France. Japan’s Hideki Uda also heads to Lausanne in-form following medal finishes at the Iseo and Edmonton World Series, and the Asian Championships.

It will be a straight head-to-head battle between Japan’s Mami Tani and Ireland’s Cassie Cava in the women’s PTS4. World champion Tani is unbeaten in international triathlon, but Cava arrives in Lausanne on the back of victory at the Edmonton World Series.

In the women’s PTS5, Switzerland’s Stephanie Baumann will hope to give the home crowd plenty to cheer for in only her second international event. In the men’s equivalent, Great Britain’s George Peasgood will return to triathlon after competing at the Para Cycling Road World Championships earlier this month.

More information on the Lausanne World Cup is available on the International Triathlon Union’s website.