Streng triumphs in the battle of blade runners

The RPC athletes take three gold in the evening session at the National Stadium, while Brazil and India break world records in field events 30 Aug 2021
Imagen 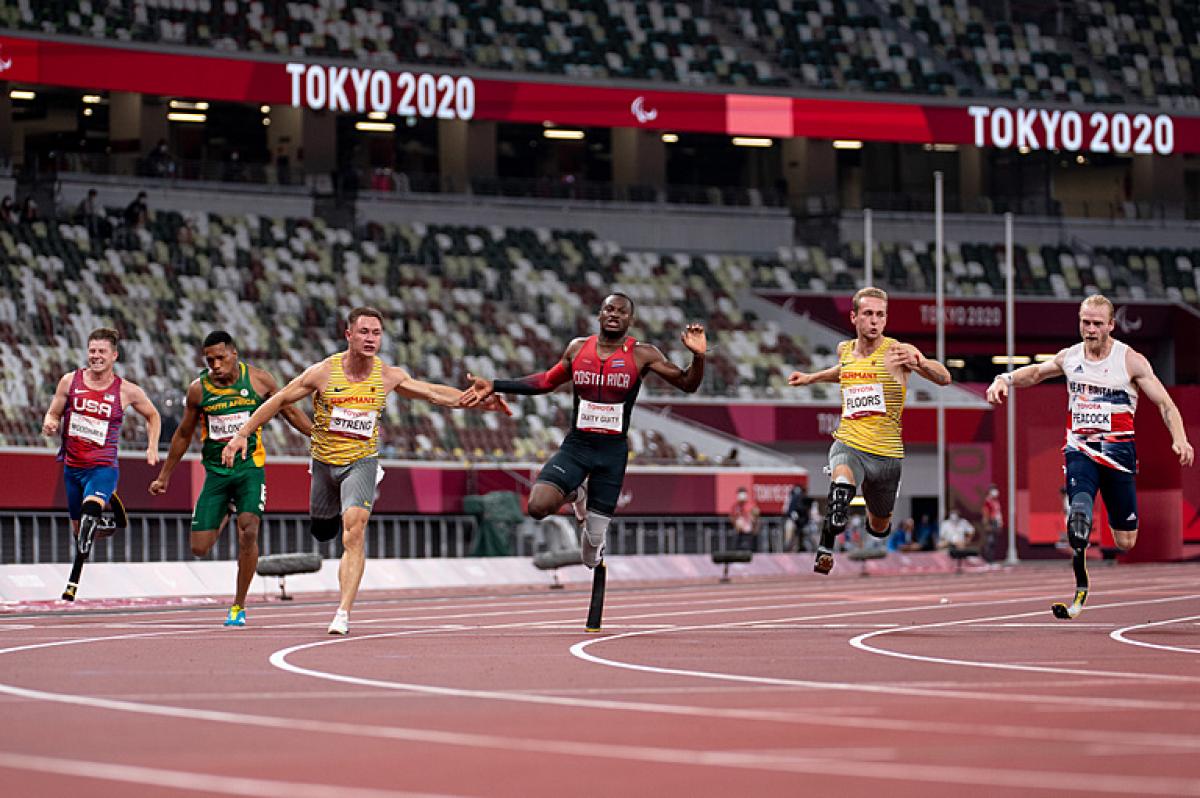 The men's 100m T64 final was the highlight of the evening session on day four (30 August) of the Para athletics action at the National Olympic Stadium in Tokyo.

Germany's Felix Streng became the new Paralympic champion after winning the event in a closely fought blade runners' battle to the finish line.

The 26-year-old German was behind the two-time reigning champion Jonnie Peacock out of the blocks but blasted through in the final stretch to cross the finish line in a blistering time of 10.76 to dethrone the British athlete of his crown.

"It feels amazing. I am so happy I could execute the race and win in such a strong, competitive field," Streng said.

"I felt confident [before the race]. I did a good heat, not a perfect heat, but I knew I really wanted it hard."

Meanwhile, in one of the most dramatic finishes in recent history, Peacock and Streng's teammate Johannes Floors clocked in the same time (10.79) for a photo finish.

"There was such high suspense. Though it wasn't a well executed race - I slipped at the start - I pushed through," Floors said about sharing the podium with Peacock.

"They showed the first two [medallists on the stadium big screen] and then nothing happened for two minutes.

"They first showed Jonnie and then me. They showed his time and then the exact same time, and we are sharing third place.

"There was such high suspense. They showed the first two and then nothing happened for two minutes. They first showed @JonniePeacock and then me. They showed his time and then the exact same time, and we are sharing third place."

"At first I thought, 'damn, I'm fourth'. Then I was full of cheer and joy. Winning a Paralympic medal is something I always wanted," said Floors, the reigning world champion.

Three golds for the RPC

The men’s 100m T63 was just as exciting a race with the RPC's Anton Prokhorov breaking the world record (T42 class) he had set in the heats 24 hours earlier to grab gold in 12.04 seconds.

India celebrated its first gold in Para athletics at Tokyo 2020 as Sumit Sumit produced an impressive world record of 68.55m to win the men’s javelin F64.

Sumit Sumit wins #gold in the men's javelin throw F64 with a new world record of 68.08!

The Russian Paralympic Committee finished with three golds on the night.

Dmitrii Safronov broke his own world record in the men's 100m T35 (11.39). He triumphed in front of Ukraine's world champion Ihor Tsvietov and compatriot Artem Kalashian.

Evgenii Torsunov celebrated the last gold medal of day four for the RPC with a new Paralympic record (5.76) in the men's long jump T36.

There were also golds for Brazil - who with the RPC now have six golds - and Iran.

“I’m still dreaming it actually happened. This is a great achievement," Gomes said. "The last throw, I would like to dedicate to my parents who have passed away, and my sister. I am very, very grateful for everything they offered me.”

Iran's Mahdi Olad also added the Paralympic title to his World Championships gold medal in the men's shot put F11 with a 14.43m-attempt.

China lead the medal table with 11 golds so far followed by Brazil and RPC with six gold each.

Complete results and medallists from the morning session can be found on Paralympic.org.