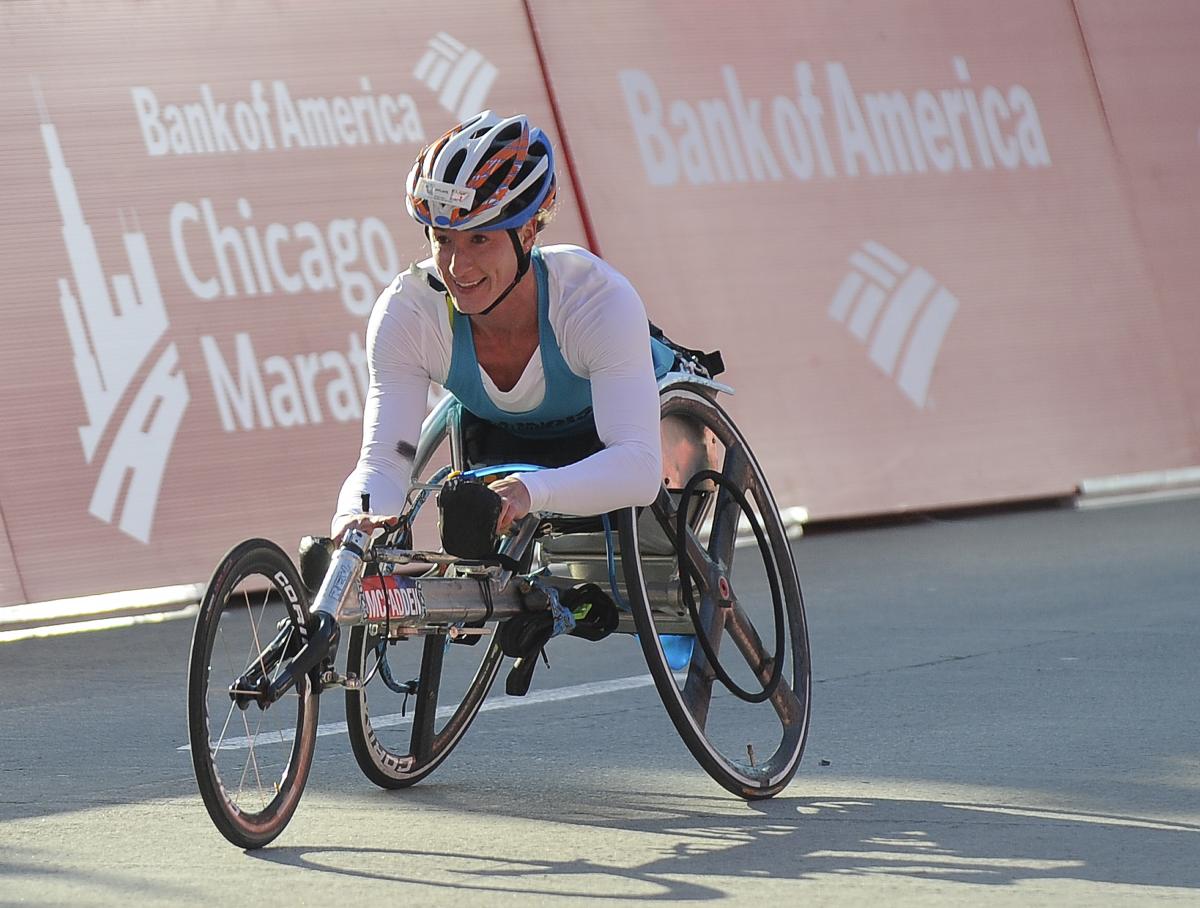 Tatyana McFadden is the defending champion in Chicago

The Abbott World Marathon Majors series travels to the USA this week for the Chicago marathon, which takes place on Sunday 8th October, with more than 20 Paralympians due to take part.

The race is the third of seven marathons in the Abbott WMM Series XI which began in London, Great Britain in April before heading to Berlin, Germany last month (September).

Twelve months ago, Switzerland’s Marcel Hug and the USA’s Tatyana McFadden took first place in the men’s and women’s wheelchair races in the windy city – both racers line up again this year.

Victory for McFadden in 2016 marked an incredible seventh Chicago marathon win for the American, making her the most successful champion of all time; she also holds the course record of 1:41.10 set back in 2015.

Executive Race Director Carey Pinkowski said: “Tatyana became the most decorated champion in Chicago Marathon history last fall. When she comes to Chicago to race, people understand that they are watching one of the greatest champions in sport perform.”

McFadden finished ahead of Manuela Schär, but the Swiss racer could well prove tough to beat this time around, having already triumphed in Boston (USA) and London in April this year – setting new course records in each race – then winning in Berlin less than two weeks ago (24th September).

Chicago will only be McFadden’s second major marathon of 2017– the 28-year-old missed competing in Tokyo (Japan) and London due to ill health, then was unable to make the trip to Berlin because of flight cancellations.

Four gold medals at the 2017 World Para Athletics Championships in July showed that McFadden had overcome any setbacks suffered earlier in the year and with vital points in the Abbott WMM Series XI up for grabs, the Series X champion will be determined to return to her winning ways out on the roads.

Schär meanwhile will be hoping she can extend her lead at the top of the table while a strong women’s field also includes the USA’s Amanda McGrory, Chelsea McClammer and Susannah Scaroni; Australian Madison de Rozario; Switzerland’s Sandra Graf and Great Britain’s marathon debutant Sammi Kinghorn.

As for Hug, last year’s win was his first victory in Chicago, coming after a nail-biting photo finish which saw the Swiss Silver Bullet and Australian Kurt Fearnley sprint to the line side-by-side.

“It was a crazy finish, I think I never had that close ever, it was so close. It was really tough, the last 100m or 200m, we also had some touches, but in the end I was happy,” said Hug at the time, before going on to win in New York and take the men’s Abbott Series X title after a superb season which saw him claim six major marathon wins including Paralympic gold.

This year the rivalry between Hug and five-time Chicago champion Fearnley is rekindled; the field also includes many of the world’s best marathon racers such as South Africa’s 2013 Chicago champion Ernst Van Dyk; Spain’s Rafael Botello Jimenez and Japanese trio Sho Watanabe, Hiroki Nishida and Kota Hokinoue. The USA’s four-time winner Josh George sadly does not compete due to injury.