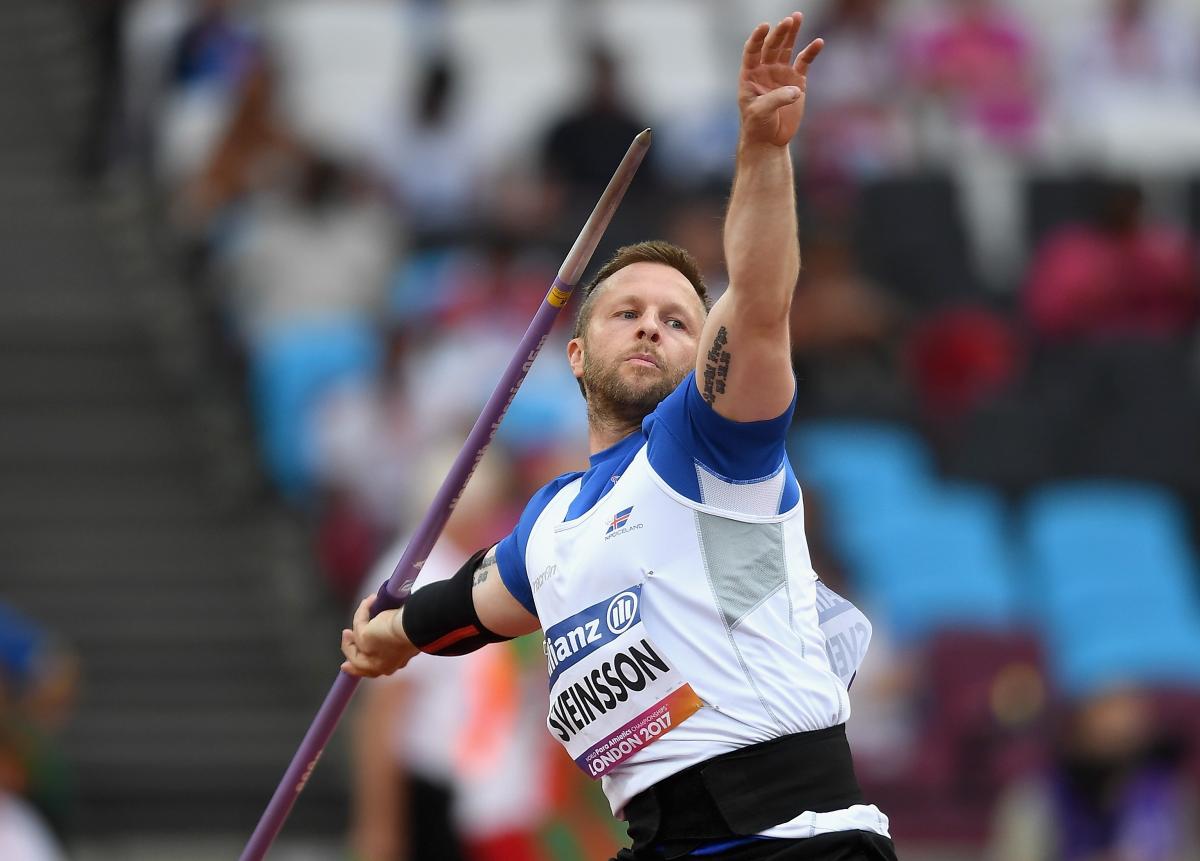 "It would mean a lot. It is really nice to be the one that everybody wants to beat. I show up on the day and show them I’m still training as hard – or harder than they are doing. I want to stay number one."

A few weeks before the 2012 European Championships in Staadskaanal, the Netherlands, Helgi Sveinsson was warming up at his local track, preparing to start his long jump session.

The Icelander, who had his left leg amputated above the knee in 2009 after being diagnosed with bone cancer, spotted a javelin on the grass and asked his coach if he could have a go; he had never thrown one before.

As a former junior international handball player, he knew he was capable of throwing – he just didn’t know how far.

“It was obvious for me, I had to try this,” explained Sveinsson. “In my first throw I did the qualification with the European standard, so after that I thought to myself, this is something I have to focus on. It just felt like finally I could use what I had learned as a young boy – the same rhythm in javelin as in handball.”

Sveinsson had found Para athletics through his work at Ossur [Icelandic orthopaedic company]. His doctor had told him after his amputation that there was “no chance” he could “do any sports”, but through his job he discovered carbon feet. By 2011 he had started sprinting and doing the long jump.

“It just felt like, finally, I’m back home, back doing what I love to do,” said Sveinsson, who had spent his childhood trying every sport he possibly could.

In June 2012, less than two months after that first throw, Sveinsson went on to win European javelin F42 silver at his first major competition.

Fast forward six years and Sveinsson is now aiming to complete a hat-trick of European golds at next month’s Championships in Berlin, Germany, having finished first in 2014 and 2016. He also has three medals from three World Championships.

But preparation this year has been different to usual – he became a father for the third time at the beginning of July after spending the season training at home in Iceland.

Still, any sleepless nights have not put him off his stride.

After setting the javelin F42 world record of 59.77m in Rieti, Italy, last year, he remains focused on becoming the first in his class (Sveinsson now competes in the F63 class for single above-knee amputees) to throw beyond the 60-metre mark.

“I’m in good shape, I’ve been training well this winter and we will see. In javelin you can never say - this is such a strange event. One day you can throw easily over 55m and close to 60m; the next day you are fighting to throw over 50 metres,” he said.

“I’m definitely in good enough shape to do it – it’s just a matter of hitting it on the right day.”

‘It would mean a lot’

If past form is anything to go by, Sveinsson could well make history in Berlin. Year on year, he just keeps throwing further.

“I feel lucky, in this event you can always get better,” acknowledged the 39-year-old, who is coached by Iceland’s three-time Olympian Einar Vilhjálmsson. “It’s such a technical event so I am just adding to what I know each year.”

As for winning a third consecutive European title, “it would mean a lot. It is really nice to be the one that everybody wants to beat.

“I show up on the day and show them I’m still training as hard – or harder than they are doing. I want to stay number one.

“I’m quite honoured to be able to compete to the standard I do now. I love competing for my country and it gives me a lot. This has been a really nice time since I started doing this.”