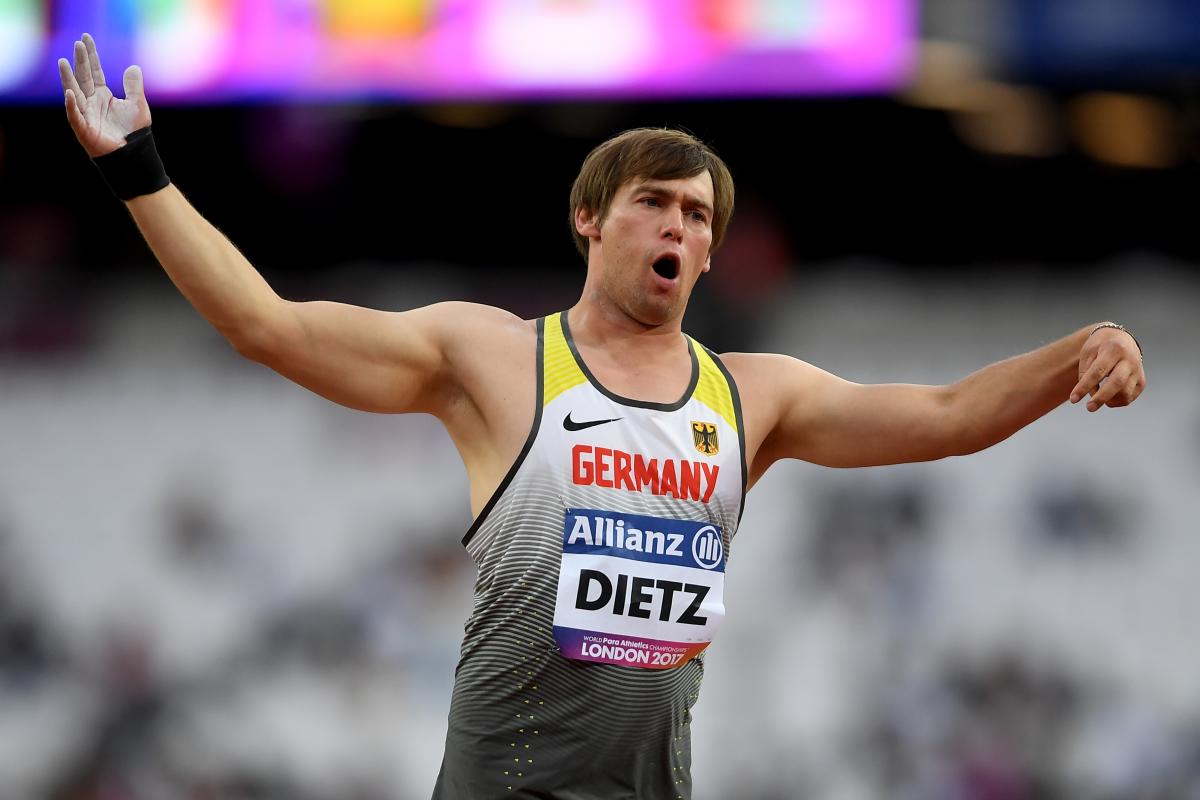 When the crowds gather at Berlin’s Friedrich-Ludwig-Jahn-Sportpark to watch the 2018 European Championships, which get underway in exactly one month’s time, there is one man who should expect the biggest cheer of all. Germany’s reigning Paralympic and world champion Sebastian Dietz has bought over 100 tickets to give to friends and family who attended his wedding earlier this year.

He also wanted to show his support to the families of children who have suffered a stroke by enabling them to come and watch the event, which takes place from 20-26 June in the German capital.

“I bought the tickets because we got married this year and I thought that it might be something nice for our guests.

“But most of all I bought them because I am the patron of an association (SCHAKI) that works for children who have had a stroke.

“I wanted to give them the opportunity to come to the stadium and see me compete. To make this possible for them, I bought the tickets.”

But Dietz hopes that his support won’t end there.

“Many people still ask me about it, so it won't stay with the 120 tickets. I'll probably need some more. I hope that the fans will cheer a lot and that there will be a good atmosphere in the stadium during the competition,” he added.

Dietz, a former amateur footballer, took up Para athletics after a horrific car accident in 2004 which left him temporarily paralyzed.

He went on to win Paralympic gold at London 2012 and Rio 2016, as well as world titles at the last three World Championships. But with second place finishes at Staadskaanal 2012, Swansea 2014 and Grosseto 2016, a European title has so far eluded him.

This year, with a home crowd behind him, he hopes to turn silver in to gold.

“Of course, as reigning world and Paralympic champion it is my goal to be on top of the podium, that’s what I want to try,” admitted the 33-year-old, who currently sits top of the world rankings, having thrown 14.83m earlier this month.

“And of course, to show the best competition in our own country and in front of the fans; to offer the best show so that we can all celebrate at the end. Basically, I want to give my best performance. I still have to work hard in the last four weeks.”

As for the chance to compete at a home Championships, Dietz hopes his country will be able to follow in the footsteps of previous nations and put on an event to remember.

“We have already experienced many beautiful competitions around the world, but especially in Great Britain, with the Paralympics and last year's World Championships,” he said.

“Both were great events and we now hope that we will have a good event ourselves. It is of course a great honour to be able to compete at an international event in your own country.”