Canada and USA return to final in Ostrava 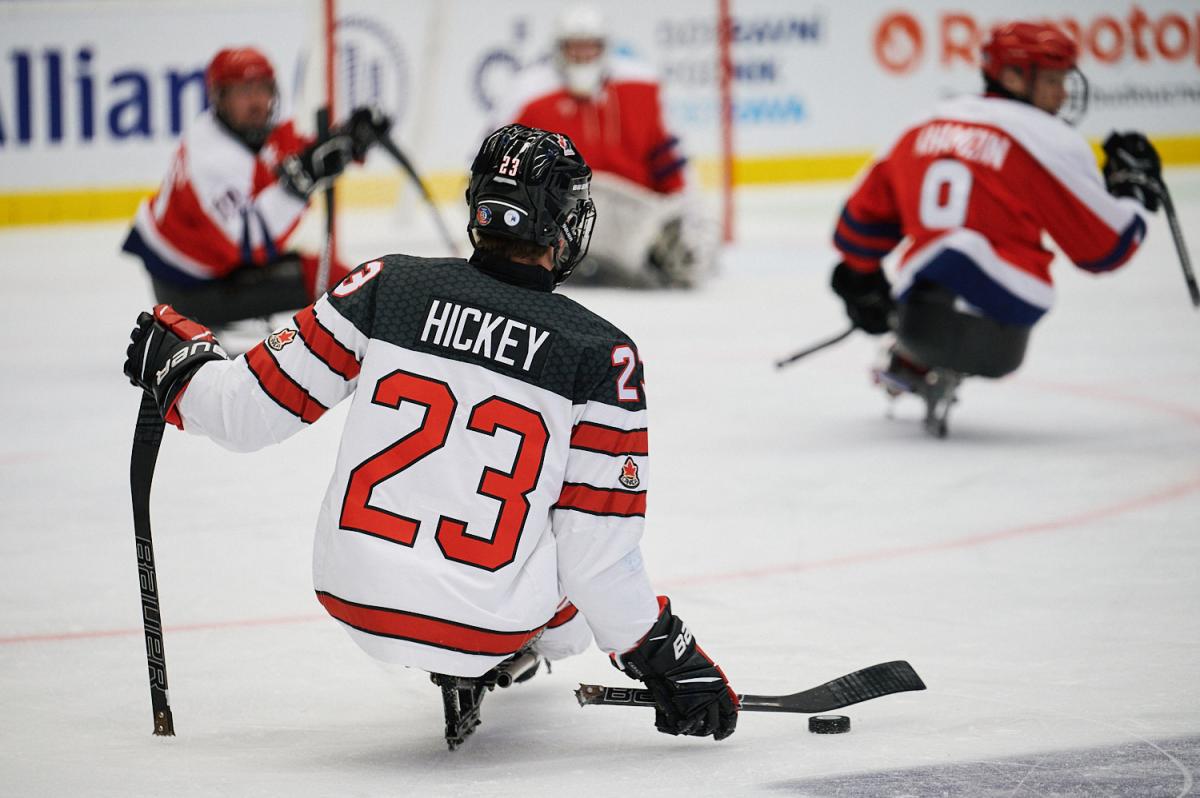 Liam Hickey scored Canada's first goal in the 2-1 win over RPC that book the ticket to the final against USA in Czech Republic
Ⓒparahockey.cz
By Stuart Lieberman and Filip Ozbolt | For World Para Ice Hockey

The world’s top two ranked teams, USA and Canada, will meet each other in the gold-medal game of the World Para Ice Hockey Championships at 21:00 (CEST) on Saturday (26 June) for the fifth consecutive time in Ostrava, Czech Republic.

The USA will look to win its second straight and fifth overall world title after beating South Korea in the semi-finals, while Canada will also go for its fifth title, trying to reclaim gold for the first time since 2017 following its semi-final victory over the RPC.

RPC and South Korea play for the bronze medal at 17:45 (CEST) also on Saturday.

In the semi-final round on Friday (25 June), Paralympic and world silver medallists Canada squeaked out a 2-1 victory over RPC to guarantee itself a 10th World Championship podium appearance.

“We’re happy to get that win, as it was a physical and fast game to play,” dual-sport athlete Liam Hickey said. “It’s always fun to play the USA, too, as it’s also physical and fast, but that’s the hockey we like to play so we’re now looking forward to that final.”

Hickey opened the game’s scoring when he picked up the puck in the neutral zone, burst in and scored shorthanded 2:49 into the first period. In the second stanza, Canadian captain Tyler McGregor scored off a feed from five-time Paralympian Billy Bridges on a two-man advantage to double their lead.

Defenseman Mikhail Miachin found a gap in the crease to score about five minutes later to bring the RPC within one, but Canada would hold them off for the remainder of the game.

Dominic Larocque was back between the pipes for Canada, recording six saves to help them grab their ninth win out of the 11 times they’ve faced the RPC in history. Goaltender Andrei Kasatkin had 11 saves for the RPC.

At the very end of the third period @gwestlake12 made the decisive save to lead @HockeyCanada 🇨🇦 into another big final! 🚫

In the day’s earlier semi-final, USA cruised its way to another gold-medal game with a 9-0 victory over South Korea, with goals from eight different players, including two from team captain Josh Pauls.

“We’re starting to peak at the right time,” said Pauls, who also had two assists. “Ultimately we want to make sure we’re peaking on Saturday, and the team’s headed in the right direction and we’re cemented in the right place going into the gold-medal game.”

Within the opening eight minutes of the contest, Josh Hargis, Noah Grove and Pauls all notched scores to give the reigning Paralympic and world champions the early three-goal advantage. Hargis’ shot from the bottom right circle would stand as the eventual game-winner.

Star forward Declan Farmer finally got his first goal of the tournament on a breakaway in the second period, while retired US Marine Josh Misiewicz notched his second on his 33rd birthday to push the USA’s lead to five.

It has been an enjoyable 23rd birthday for @JWallace_USA so far!🎂

The best gift for him would be to qualify for the finals with @usahockey.

Brody Roybal, Chris Douglas and Kevin McKee all added points in the third for the US, with Roybal’s cut across two defenders for a score being his team-leading seventh goal of the tournament.

Steve Cash and Jen Lee split the winning duties in the net for the US, with Jae-Woong Lee recording 38 saves for South Korea.

The final and the bronze medal game will be streamed live on World  Para  Ice Hockey’s website  and Facebook page with geo-block restrictions in Canada, Czech Republic, Slovakia and USA.

Complete results and statistics are available at the Ostrava 2021 microsite. 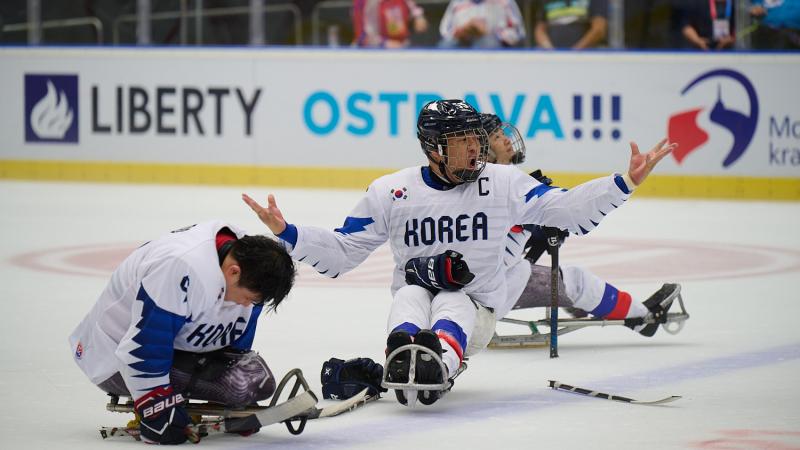 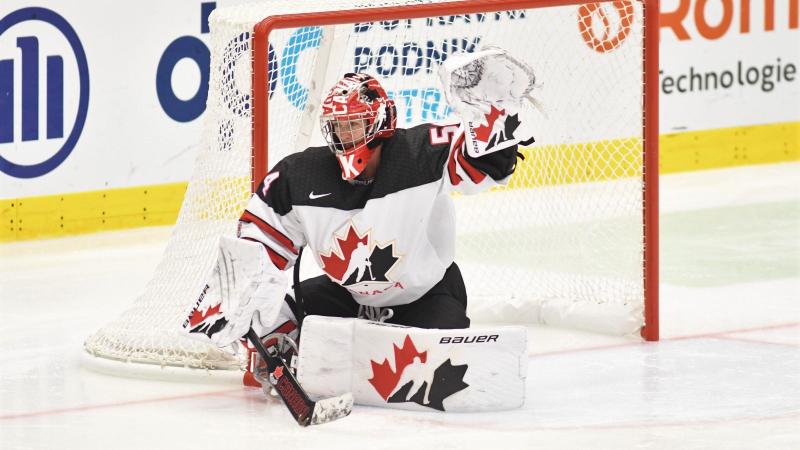 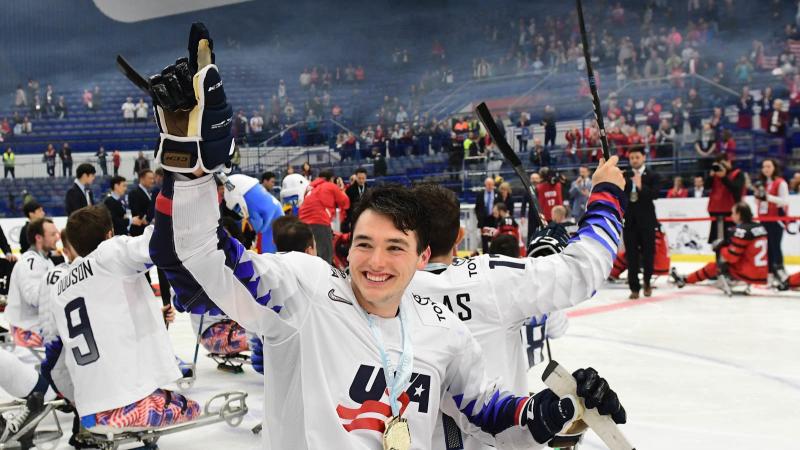