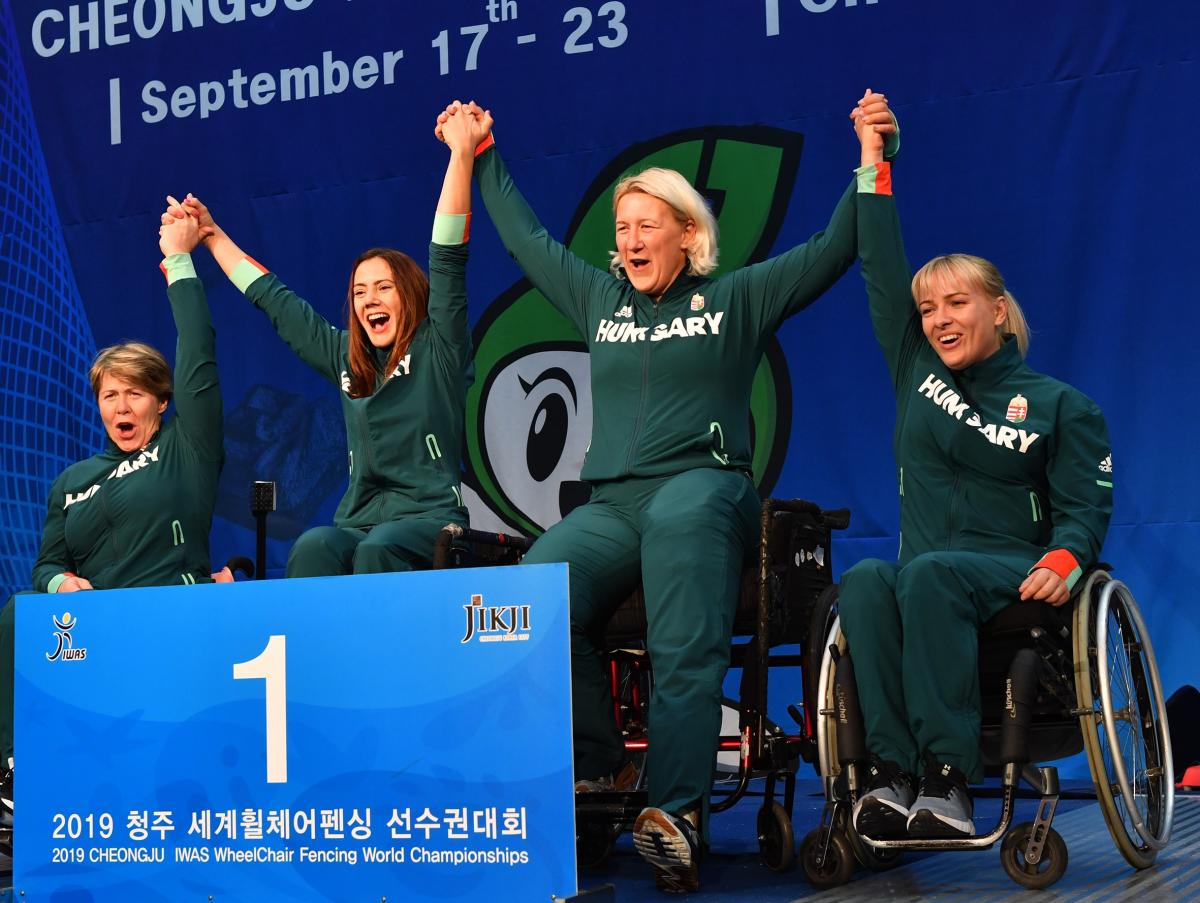 Hungary defeated Hong Kong in a thriller to clinch gold in the women’s team foil at the 2019 Wheelchair Fencing World Championships in Cheongju, South Korea, on Sunday.

The Hungarians had also dispatched Russia 45-37 to secure their place in the final whilst Hong Kong reached their own impressive semi-final result.

Hungary, who also had an absorbing face-off against defending Paralympic champions China, had to dig deep to get Hong Kong out of their way.

With that success, Zsuzsanna Krajnyak, Gyongi Dani and Eva Andrea Hajmasi also put the ghosts of the Rio 2016 Paralympic Games final to rest.

“This is a very important competition for us because this is our first world title,” said a jubilant Hajmasi. “The group [Hong Kong] was very hard and they are fighters, they were a very strong team.

“The first match [against China] was very technical and a very good match. And after the Russian team and after the Hong Kong team and we win, this is incredible!”

With both finallists having lost lot of steam from their earlier wins, it was always going to be the mental strength that would decide the winner.

Hong Kong started off well – both Ng and Yee won their matches to gain an early four-point lead of 10-6.

But then Paralympic bronze medallist and 2017 world champion Krajnyak took to the piste. She managed to gain the lead against Chung.

Hungary lost the edge in the next round but regained it soon after. The individual foil medallist from earlier on the week – Hajmasi – put in a great performance to give her team a larger, five-point buffer.

Hong Kong make a promise to all their fans...they will be seeing you at #Tokyo2020 after just missing out on 🥇 by one touch in the women's team foil.#Cheongju2019 | @Paralympics pic.twitter.com/YudQsyQfbm

“We are so happy to get a silver medal for Hong Kong,” Yee said. “For the semi-final we beat Italy, it was our dream because all four of us did a very good job.

“In the final, Hungary today is just very strong because they beat China and then Russia and it was a tough match and maybe we were just a bit unlucky. We are still very happy for the silver medal and we will try our best to do our job and hope we will be seeing every one of you [our fans] during the Tokyo 2020 Paralympics,” added Yee, who watched on with Hajmasi before it was their turn to try and land the decisive blows.

The pair traded hits in an evenly matched bout, but it was Hajmasi who had the edge. She scored four points without reply. But then Yee began her own comeback.

The Hong Kong fencer matched Hajmasi’s performance to dramatically bring the score level at 44-44. The next sequence saw both women celebrate a hit but after a video review the scoreline remained tied. With the atmosphere thick with excitement, Hajmasi tore through the tension, lunging forward to land a touch on Yee’s chest and sealing the match.

The 2019 Wheelchair Fencing World Championships concludes on Monday with the men’s epee and women’s sabre. As well as the world titles on offer, the competition is also a crucial stop on the road to the Tokyo 2020 Paralympic Games.