The Flying Finn is aiming to make up for world silver last year by winning the European and Paralympic titles this year and setting a new 100m T54 world record. 06 Jun 2016
Imagen 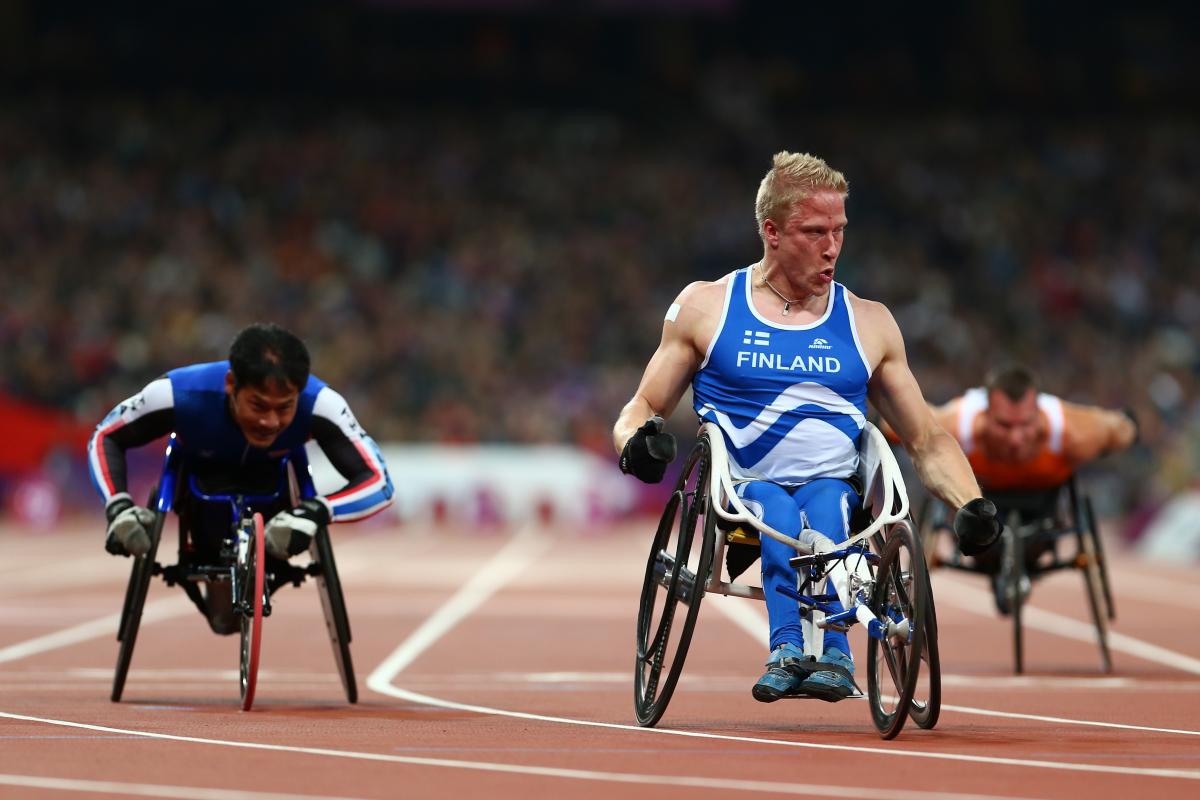 “After I got the silver it gave me a huge extra boost because I really want to be the fastest man in the world."

Finnish racer Leo-Pekka Tahti is determined to be the best in the world this year – and that means breaking world records.

But the Flying Finn has found extra motivation in that defeat and is now focussed on confirming his status as the world number one this year – and that means breaking records as well as winning titles.

“After I got the silver it gave me a huge extra boost because I really want to be the fastest man in the world.

Tahti will line up at the European Championships in Grosseto, Italy, this week. He has an important title to defend - he also wants to show that he will be the man to beat come September’s Paralympic Games in Rio de Janeiro.

That means he is targeting his world record, which has stood for nearly four years. A strong performance at the Grand Prix in Nottwil, Switzerland, two weeks ago has given him added confidence.

“Now I did 13.85 (in Nottwil), so if the track is okay (in Grosseto) there is a very good chance that I will break the world record there,” said Tahti, who currently tops the 100m T54 world rankings.

“All is going well for me. I had a very good winter, no injuries, and played less basketball than ever. I’ve put more focus just on the 100m, so training has changed a bit too. At the moment I’m very satisfied with my performance and my shape.”

Tahti is well aware that fast times are paramount this year more than ever – not least to give his rivals something to think about.

“It’s my goal in this season of course, especially if you speak about Rio,” he added.

“I have to be ready to break my world record time if I want to win, because there are one, two, maybe three Chinese guys who are competing at a very high level and I have to make sure now that I do the best at Grosseto and before Rio.”

The two-time world champion admits that 2015 was not his best year – injuries and problems with his chair wiped out several weeks in the summer, although there were happier moments too – he married his fiancée Sandra in June.

But now his focus is back on winning, and winning well. The 32-year-old believes he is in the best possible shape to defend his 100m T54 European title.

“The European title is one of the most important titles – it’s just the World Championships and Paralympic Games that are higher,” said Tahti, who won 100m gold and 200m silver in Swansea, Great Britain, two years ago.

“For me it is absolutely one of the main competitions in this season, so of course I want to win there.”

Tahti also has a bigger chance than ever to make it a golden double in Grosseto. With the Dutch team absent from the competition, there is no Kenny van Weeghel – the 200m T54 defending champion is one of Tahti’s chief rivals.

“It might be a very interesting race,” admitted Tahti, who currently shares third place in the world rankings for 200m alongside Great Britain’s Richard Chiassaro, behind world leader van Weeghel and second placed Alexey Bychenok.

“With the Russian, Bychenok, and Richard Chiassaro coming through, it’s not very easy to win the 200m,” he said.

“Of course it could be possible for me but I don’t know what exactly my shape is for the 200m. But Kenny’s not there so that’s helping a lot.”

More than 600 athletes from 36 countries will be in Grosseto for the 2016 IPC Athletics European Championships which take place between 10-16 June. Athletes will contest over 171 medal events at the Carlo Zecchni Stadium and every minute of live action, together with live results, will be available at the event website.

Athletics
IPC to livestream 32 hours of coverage from Grosseto 2016