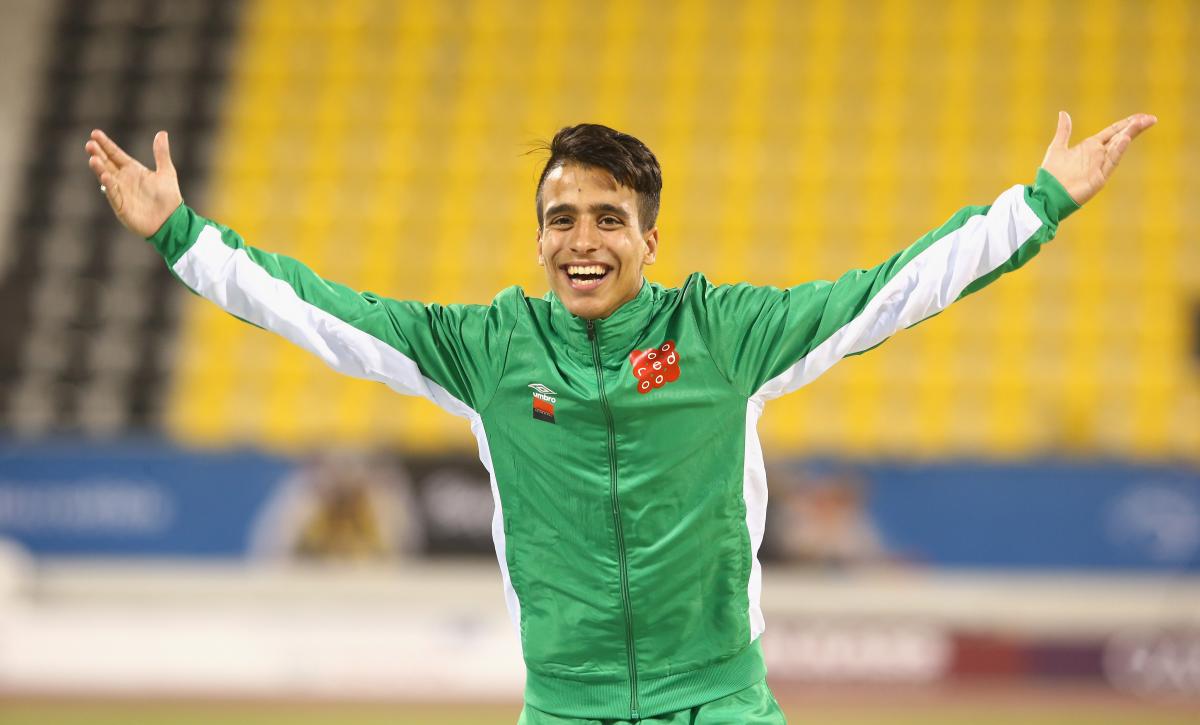 Abdellatif Baka is set to compete in the 5,000m for the first time at the Dubai Grand Prix

“I live under great pressure like any other world champion, and I agree with these pressures because all the people are waiting for me to do more. I am always ready to give my best.”

Algeria’s Paralympic and world champion Abdellatif Baka is preparing to conquer the unknown.

Baka will compete over 12.5 laps of the track for the first time at the season-opening World Para Athletics Grand Prix, which takes place from 24-27 February in Dubai, United Arab Emirates.

“I will discover how prepared I am for long distances because for the first time in my life I will race the 5,000m in Dubai this month,” said Baka, who plans to focus on both the 1,500m and 5,000m this season following the removal of the 800m T13 from the Tokyo 2020 programme.

It is a challenge he is relishing as he looks to add the 5,000m to his repertoire ahead of the World Championships in November this year.

“Yes, I adore the challenge and I wonder how prepared I am for this difficult distance,” added Baka, who admitted that he is “not used to the difficulties in this competition alongside the current champions.”

Baka hit the headlines in 2016 when he won Paralympic 1,500m gold with a new T13 world record of 3:48.29, faster than the time it had taken for US athlete Matt Centrowitz to win Olympic gold one month earlier.

But now the vision impaired athlete has set himself a new challenge, and a strong start – as well as vital qualification times – is high on his agenda after a year spent focused on training.

“Last year was all about preparation for this year,” explained Baka, who raced just a couple of times in 2018. “I had a small problem with injury too and now it is okay.

“The benefit of the Dubai Grand Prix is the preparation it provides for upcoming tournaments. It is impossible for me to be a true sportsman without competition. Because the World Championships are far away, everything must be in place so that I do not tire.”

While his dominance and ability over middle distances is well known, the 5,000m provides a new test in a class already bursting with talent.

At the Dubai Grand Prix – Baka’s first time competing on the track that will also host the 2019 World Championships - he lines up against Tunisia’s Paralympic 5,000m T13 bronze medallist and world silver medallist Bilel Aloui.

There’s no doubt the pressure to achieve will be on from the start. Still, it is something Baka, well known in his home country following his successes on the track, takes in his stride.

“I live under great pressure like any other world champion, and I agree with these pressures because all the people are waiting for me to do more. I am always ready to give my best,” he said.

“My objectives this year are to run a good time in the 1,500m – maybe a record. Mentally I am strong and everything is going well. My focus is to keep my world title.”

This week’s Grand Prix could provide the first indication as to whether he is capable of double gold come November.

Athletics
Grand Prix 2019: All you need to know