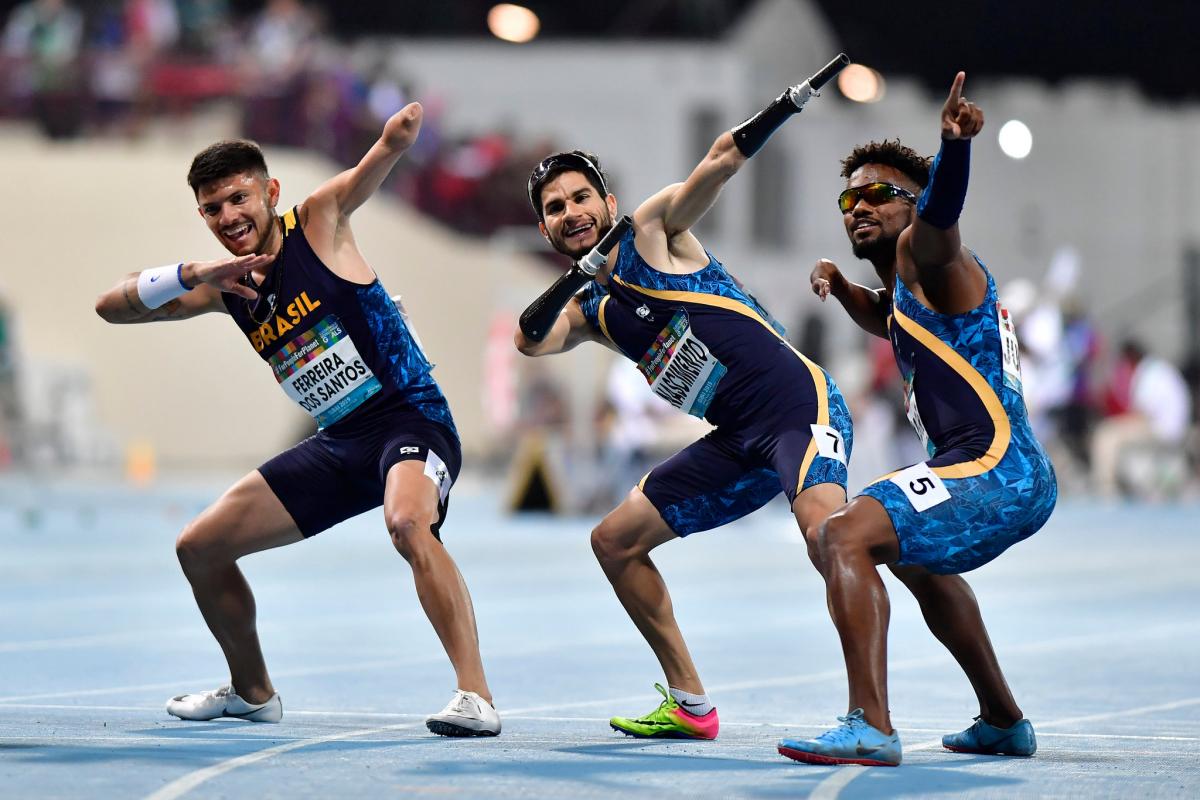 DUBAI: The Brazilians created history with a clean sweep in the 100m – clinching the top three slots on the podium at the 2019 World Championships on Tuesday.

Petrucio Ferreira set the tracks on fire by setting two fastest times in a 100m race of a major Para athletics championships.

He made his intentions clear in the 100m T47 morning heats itself with a whirlwind effort to set a world record with a time of 10.42seconds. Ten hours later, he was just two second over that milestone but it was enough to seal the gold with ease.

Finishing second with a time of 10.58seconds was Ferreira’s countrymate Washington Junior. Another Brazilian Yohansson Nascimento completed the top three for South American nation. Junior and Nascimento’s times were also their personal bests.

“This is a moment of total happiness for country and for us. Top three podium for Brazil and all three of us qualified to Tokyo 2020, can’t ask for more,” an ecstatic Ferreira said.

“It is a dream coming true for me, it was a hard race but I really wanted to give my best. Now, with all three getting medals, I can’t be happier,” he added.

Brazil, following that effort from their sprinters, regained their second spot in the medals tally. Another gold on Tuesday evening for Brazil came through Jerusa Geber dos Santos (11.80) in the women’s 100m T11.

The result of Jerusa would have been a world record if was not for the 2.3 m/s tail wind - above the 2 m/s limit for a time to be registered as a record.

It was also an emotional night for Chilean shot putter Francisca Mardones. The former wheelchair tennis player lost her father a few days before the World Championships but decided to stay in Dubai and battle it out.

“After my dad passed away, I made the decision to stay here and compete for him. Today we got it [this medal] together,” said Mardones while struggling to hold back her tears.

After 11 years and two Paralympic Games in wheelchair tennis, Mardones had to retire because a domestic accident. In 2017, she switched the court by the field.

“Two years ago I got injured and it was really tough to move the wheelchair to play tennis. I had to take a decision and I started in shot put where I don’t have to move the chair. Until now the results had been really good,” revealed Mardones.

Salum Kashafali (10.54) won his first world title in the men’s 100m T12 with a Championship Record. Born in Congo, Kashafali and his family left the country in 2004 and settled in Norway.

Kashafali’s Para athletics debut happened in May with a world record. The 25-year-old took Norway’s first gold in Dubai.

“Everything is possible, we shouldn’t put a limit to us no matter what. All the athletes here motivate me to show we can run fast, jump high and do whatever,” said an overjoyed Kashafali.

German-born multi-Paralympic medallist Vanessa Low (4.68) had a golden debut as an Australian athlete in a major championship as she won the women’s long jump T63.

“Australia is my new home and it’s amazing to be part of the team and celebrate now as part of this team. Competing now for the same country as my husband, representing the country where we live, is amazing” she said.

Tunisia’s Paralympic star Raoua Tlili (34.48) won the women’s discus throw F41 and world record holder Yassine Gharbi added another one in the  men’s 400m T54 with a time of 40.06.