Bydgoszcz 2021: Caironi and Kornobys shine with gold on day three 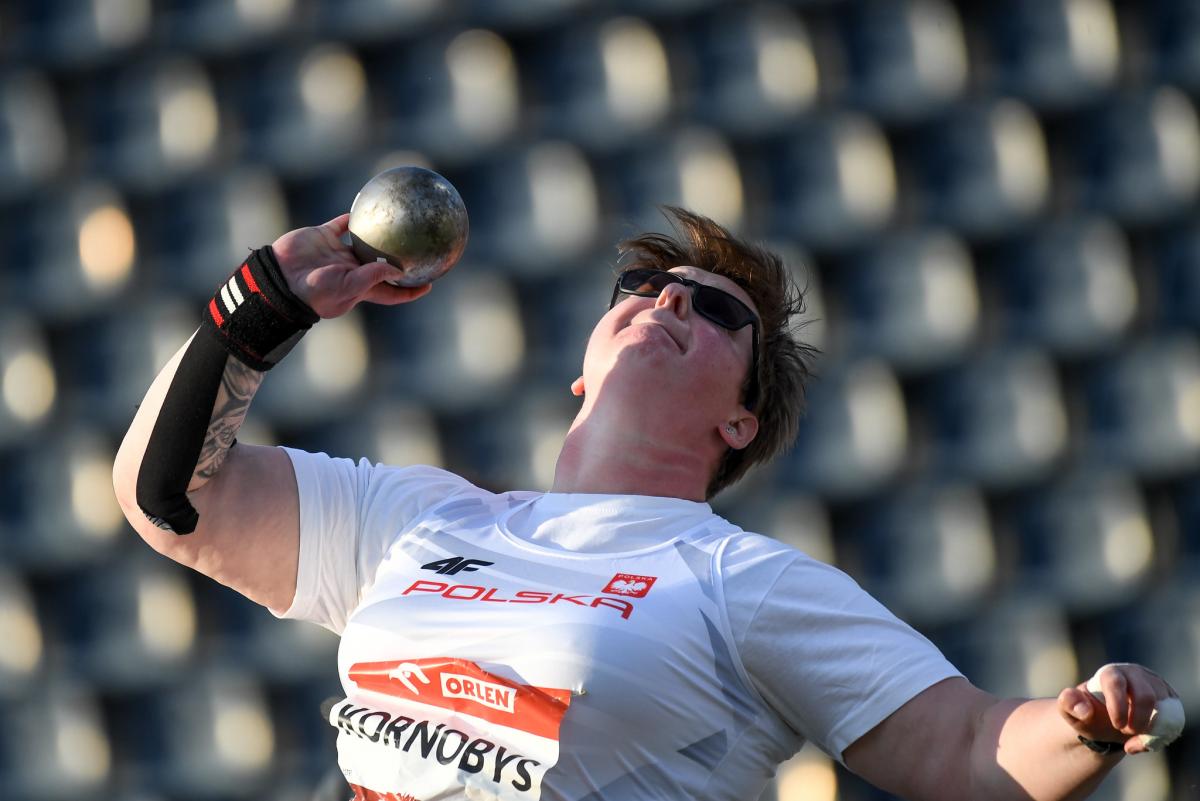 The third day of the European Para Athletics Championships in Bydgoszcz, Poland saw two world records in the same event and a local champion grabbing a gold medal in last throw on Thursday (3 June).

Italy’s Martina Caironi defended the European title in the women’s long jump T63 smashing her own world record twice. First in the second attempt (5.05m) and then again in the fourth jump (5.06m).

“I finally broke the world record twice and I have a confession to make. Every time Markus Rehm breaks the world record, I do it too. It was the same today, but it’s just a coincidence, of course,”

Caironi said with a smile referring to the German athlete’s world record in the men’s long jump T64 on Tuesday.

It was Caironi’s second title in Bydgoszcz after the triumph in the women’s 100m T63 on day one.

“I am happy to break a world record. I was working a lot on my running and my jump. This is a great year for all the athletes and for me as well,” the 31-year-old added.

On the field, Poland’s Lucyna Kornobys took the gold in the women’s shot put F34 in her last attempt breaking the European record with 8.78m.

Her rival Vanessa Wallace from Great Britain also broke the European record (8.73m) but had to settle for the silver medal after winning the European title three years ago in Berlin.

Paralympic medallist @smartinella 🇮🇹 breaks her own WR in her second attempt in the women's long jump T63 (5.05)!!

The host nation had more reason to celebrate as Maciej Lepiato defended his European title in the men’s high jump T42/44/63/64. He was successful at the 2.08m-margin and defeated the world champion from Dubai 2019, Great Britain’s Jonathan Broom-Edwards (2.04m).

“When you race in a championships final, the only thing that matters is the win. My time was excellent, to be fair. I am happy with it. It was close to my personal best and I am happy to be going to Tokyo in this kind of form,” said Young.

Catherine Debrunner from Switzerland was amongst the athletes who won their second gold in Bydgoszcz this week. The 26-year-old triumphed in the women’s 400m T53 race with a time of 55.71, a new competition record.

“I feel good because my time was really fast. I talked to my coach and the goal was to be under 57 seconds. Now it’s 55 seconds which is really fast,” said Debrunner, who also won the women’s 100m T53.

Denmark’s Daniel Wagner repeated his double victory at Berlin 2018 adding a gold in the men’s long jump T63 (7.15m) to the first place in the men’s 100m T63 on the previous day.

"I didn't notice that I had already had two races,” Menje said. “It gives me more routine, because now I know how it works. I am very grateful for the experience here."

In the women’s track competition, Mandy Francois-Elie defended her European title from Berlin 2018 in the women’s 200m T37. She was the fastest with a time of 27.55.

All the action from Friday, day four of the Euros, can be followed live on the World Para Athletics website and Facebook page (with geo-block restrictions in Spain, Poland, and the United Kingdom).