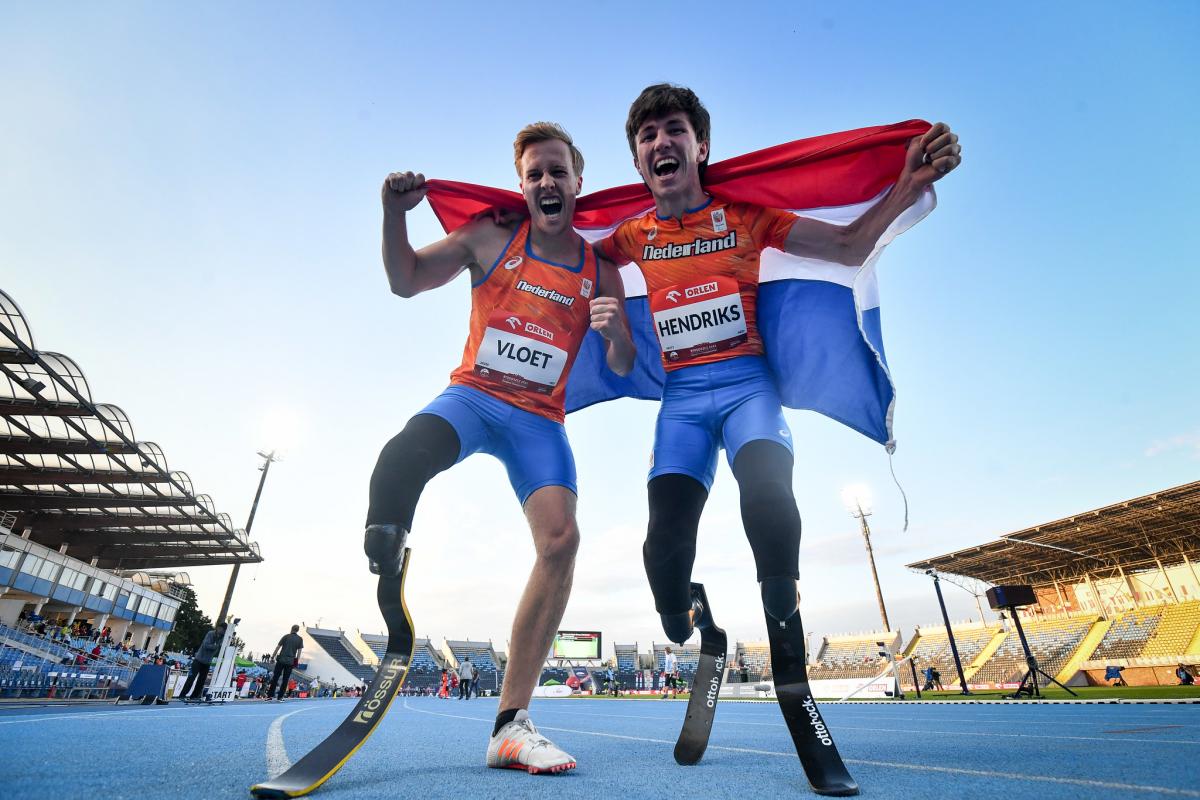 “It feels amazing. I obviously didn’t expect it. After the false start from Seitis, I knew I had a chance. It was a good race, and I am really happy with the result”, said Hendriks, referring to Greek athlete Michail Seitis disqualification.

Reigning Paralympic and world champion Sophie Hahn from Great Britain defended her European title in the women’s 100m T38. The world record holder was convincing (12.58) in front of her biggest rival Luca Ekler (12.80) of Hungary.

“I am very happy. When I went through the finish line and saw the result, I was surprised”, said the 24-year-old who is preparing to defend another title, but now in Tokyo at the Paralympic Games.

“It is very hard, but the training is going in the right direction. I am satisfied by the fact that the Paralympics are going to happen,” Hahn added.

Really grateful to be back on the track at a major international comp in GB colours. Big thank you to all the organisers from @ParaAthletics and @BritAthletics

Happy to retain my European title and can’t wait to build on this performance through the rest of the season 🇬🇧 pic.twitter.com/QQNiyglhfW

Marcel Hug, another defending champion from the Berlin 2018 European Championships, won his seventh European gold in Bydgoszcz on Wednesday. He finished first in the men’s 1500m T54 with a new competition record (3:00.37).

“I am satisfied with the race. I think I had a good performance today, it was quite exhausting, but at the end of the day it makes me happy”, admitted the Swiss Silver Bullet.

Hug has won eight Paralympic medals, 19 World championships medals and added the ninth European podium to his tally. He turned professional in 2005 and is still among the best in his class.

“There is no secret to my longevity. There is a lot of training involved every day. I have a good environment around me that gives me a lot of support”, said the 35-years-old, who added:

“It feels amazing to be back at an international competition. It is fantastic to be in Poland. I am here for the first time. It’s also an important step towards the Tokyo Paralympics and it is amazing to compete at a high level.”

Patricia Eachus won the second gold for Switzerland in the session as the fastest in the women’s 1500m T54 with a time of 3:38.53.

Yet another win for @MarcelEricHug as the two-time T54 Paralympic and nine-time world champion adds a seventh European crown to his illustrious collection. #Bydgoszcz2021pic.twitter.com/mMfLqTFcpr

The reigning world champion Peter Genyn of Belgium did not leave any room for surprise in the men’s 200m T51 and won his second consecutive European title (39.01).

“I knew that [Finland’s] Toni Piispanen and I were the fastest guys out there so I am satisfied to win against him”, said Genyn who broke the competition record.

“We had a long time without competition and now we spent a month on the road, had some races in Switzerland. This was the first proper race and I really needed it. It is better for the body and it felt good to be here,” Genyn added.

Another favourite who delivered in track events was Denmark’s Daniel Wagner, who took his second consecutive European gold in the men’s 100m T63 (12.63).

“Normally, I am not in such a good shape at the start of the season. Running 12.37 is mind-blowing to me, especially because my goal this season is Tokyo. I don’t know how it’s going to be there, but I am sure it will be faster,” Wagner said.

What a race for the Russian Aleksandr Iaremchuk in the men's 1500m T46!

He beats the world and European champion Hristiyan Stoyanov, from Bulgaria, to grab the gold with a CR.

Ukraine’s Liudmyla Danylina did the same in the women’s 1500m T20 defeating Poland’s world record holder Barbara Bieganowska-Zajac with a time of 4:43.63.

Russian was in top form in the evening session taking other five gold medals.

Zak Skinner from Great Britain took his first major gold medal in the men’s 100m T13 with a new personal best (11.10). Said Najafzade from Azerbaijan rounded up the winners with a gold in the men’s long jump T12 (6.97m).

After two days of competition in Bydgoszcz, Russia took over the first place in the medals table with 30 medals (13 gold, nine silver and eight bronze medals).

Athletics
All you need to know about the European Championships