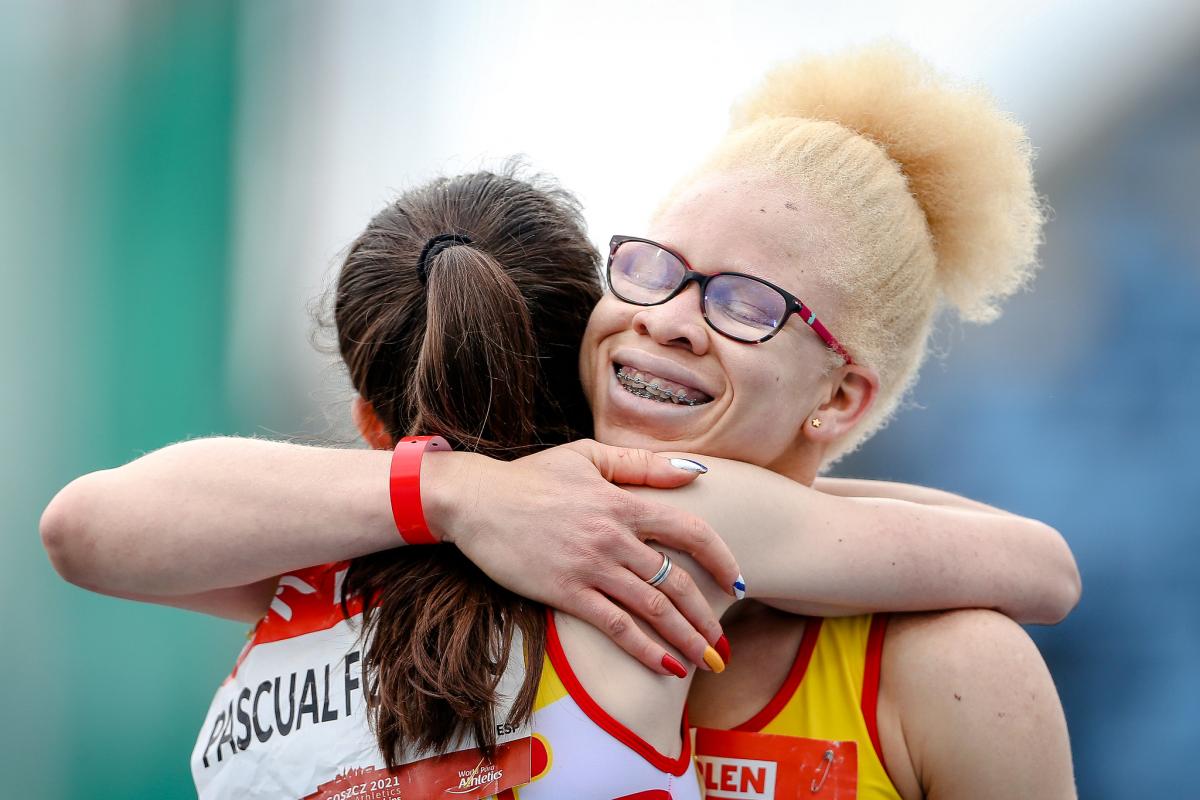 Spain's Adiaratou Iglesias Spain was responsible for the first big upset at the European Championships in Bydgoszcz, Poland on day two's mornign session on Wednesday (2 June).

The 22-year-old sprinter took the gold medal in the women's 100m T13 in 12.08, defeating the reigning world and Paralympic champion Leilia Adzhametova of Ukraine (12.24).

“This result is really important for me because I changed the category recently. I was worried about it, but I came to Bydgoszcz to do my best and I think I managed to do it. On top of that, I am really happy to be competing again”, said Iglesias, who won Spain’s second gold medal at the Euros.

Safronov eventually took the gold medal after the photo-finish. Tsvietov ended in third place with a time of 11.90.

The other world record of Wednesday's morning came in the men's club throw F51. Reigning Paralympic and world champion Zeljko Dimitrijevic improved his record set in September 2019 in Krusevac, Serbia with a 34.71m-throw.

“I am really happy with this competition, especially because I broke the world record again. Serbian flag will be on the podium again and it means a lot to me. I showed that I am invincible in this event”, said the European champion.

“Every great result is important for me because of my age. I will give my best to repeat this result in Tokyo, but I am not sure that I will break the world record one more time. Every throw above the 33.00m-mark gives me the gold medal in Tokyo, I am sure about it”, concluded the 50-year-old.

Ukraine’s Yuliia Pavlenko won her second gold in Bydgoszcz. After the triumph in the women’s 100m T11 on day one, she topped the podium in the women’s long jump T11 with 4.91m – a new competition record.

Aleksander Kossakowski and his guide Krzysztof Wasilews triumphed in the men’s 5000m T11 after the disqualification of Dubai 2019 silver medallist Fedor Rudakov of Russia.

“It is a great experience to win here in our country. It’s a pity that we couldn’t celebrate with the spectators, but we heard voices from our friends and coaches. We are happy to be here despite the pandemic”, said Kossakowski after his first major title.

“For sure, we are thinking about Tokyo, it’s our biggest goal. It has been on our minds for four years. It is the best competition in Para athletics. We dream about a gold medal in Tokyo.”

Zeljko Dimitrijevic 🇷🇸 ! The current WR and CR holder improves his own record by throwing an astonishing 34.71m in the Men's Club Throw F51. What a performance💯

Maria Lyle from Great Britain won her seventh European Championships title. This time, she was the fastest in the women’s 200m T35.

There were more five gold medallists in the morning session on day two. Russia won with reigning world champion Andrei Vdovin in the men’s 100m T37 (11.53), while his compatriot Anna Sapozhnikova triumphed in the women’s long jump T37 (4.60m).

Miroslava Obrova from Czech Republic finished first in the women’s shot put F57 with a new season-best (7.06m), while in the men’s shot put F11 Croatian Miljenko Vucic got his first European title with a throw of 13.25m.

Athletics
All you need to know about the European Championships