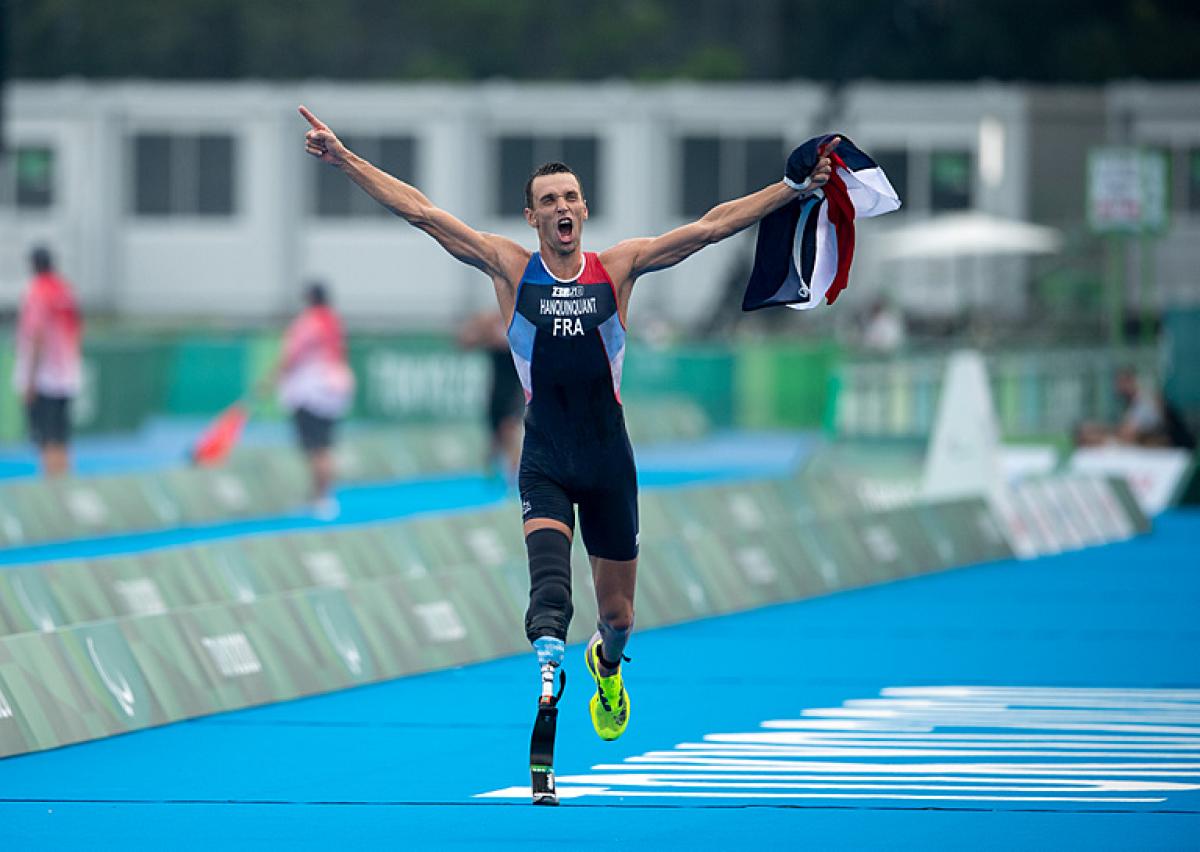 THE CHAMP: Alexis Hanquinquant of France crosses the line to win gold in the men’s Triathlon PTS4 at Tokyo 2020 Paralympic Games.
ⒸOIS/Joel Marklund
By Lucy Dominy | For the IPC

Featuring at only its second Paralympic Games, Para Triathlon continued to deliver intrigue and drama at Tokyo 2020.

As the three-time World and European champion, Frenchman Alexis Haquinquant’s win at Tokyo 2020 was not a surprise. Instead it was the way he executed the swim, bike and run in hot and humid conditions which left onlookers open-mouthed.

Haquinquant completely dominated the men’s PTS4 from the start. Just halfway through the 750m lap of Odaiba Bay, he had opened up a 29-second lead over his nearest contender. This was extended to two minutes during the bike segment. The Para triathlete then crossed the finish line for gold with a four-minute lead - one of the biggest in the sport’s history – to set himself up as the favourite for his home Paralympics in 2024.

With Tokyo being the second Paralympic Games for Para Triathlon, you might expect the podiums to constantly change.

Try telling that to the USA’s Alysa Seely who secured her second Paralympic gold in the women’s PTS2 in Tokyo.

Seely showed that she once again had the grit to triumph, claiming the lead with 1km to go in the running section after a closely fought race.

The podiums of Tokyo 2020 featured a raft of athletes who either made the switch from other sports or were also competing in multiple events.

These included the USA’s Brad Snyder – a five-time Paralympic champion in swimming – who claimed gold on the debut of the men’s PTVI.

Compatriot Kendal Gretsch splits her time between Triathlon in the summer and Nordic skiing in the winter, and was triumphant in the women’s PTWC to add to her two Paralympic winter golds.

British teammates Claire Cashmore and Lauren Steadman shared the podium with gold and bronze respectively in the women’s PTS5. Cashmore is a five-time Paralympic swimming medallist whilst Steadman also competed in the pool at Beijing 2008 and London 2012.

And Jetze Plat reached an impressive golden treble in Tokyo. The Dutch defending champion took the men’s PTWC crown, following it up with a win in the men’s time trial and road race H4 in cycling.

Just a few months before Tokyo 2020, Spain’s Susana Rodriguez was thrust into the spotlight after appearing on the cover of Time Magazine.

The story was not about Rodriguez’s performance in Para Triathlon. Rather it covered her role on the front line of the fight against the pandemic in her country. As a doctor, she spent 2020 relentlessly treating patients whilst only being able to train at home.

But Rodriguez was not to be defeated. Along with her guide Sara Loehr, the Spaniard kept her promise of improving on her fifth-place finish from Rio 2016 with the gold in the women’s PTVI.