From Tokyo to Tbilisi: Mariana D’Andrea 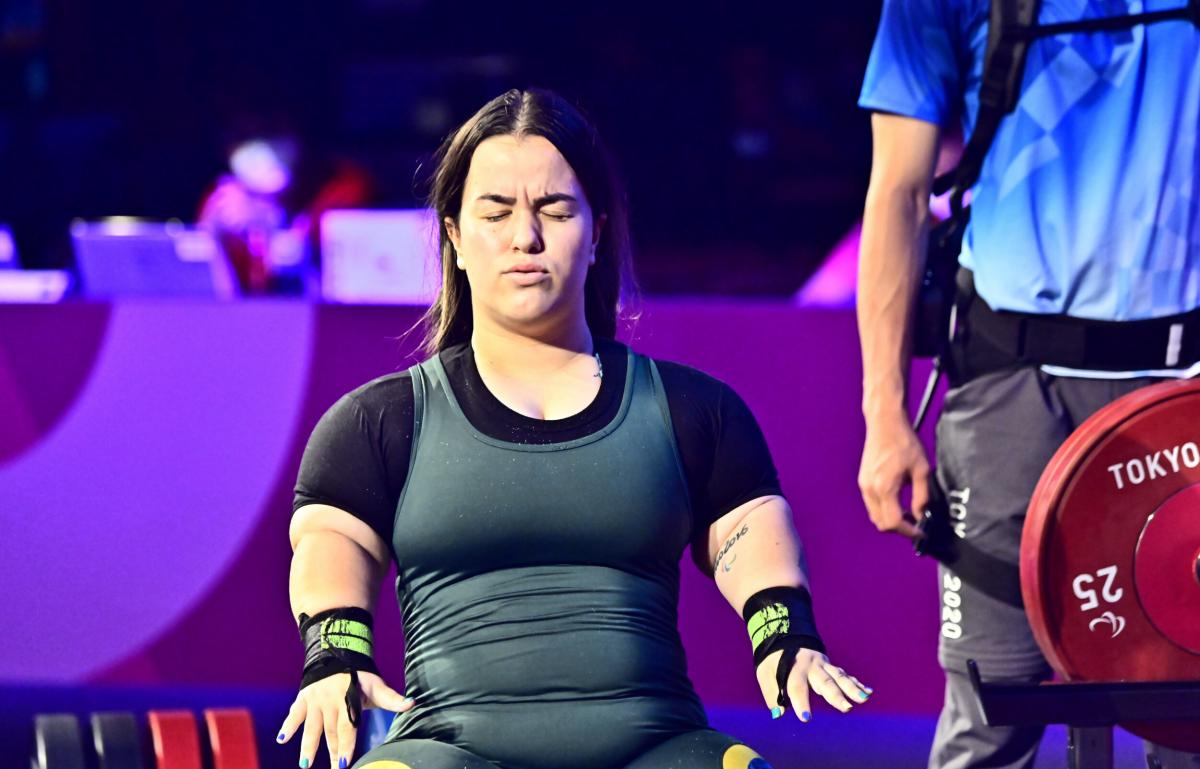 Mariana D’Andrea of Brazil lifts 137kg in her third and final attempt to claim her country’s first Para powerlifting gold at the Paralympics.
ⒸHiroki Nishioka/WPPO
By World Para Powerlifting

The countdown to the World Championships continues with the seventh athlete featured in the From Tokyo to Tbilisi series, Brazil's Mariana D’Andrea.

From Tokyo to Tbilisi series is highlighting some of the best performers at the Tokyo 2020 Paralympic Games coming to Tbilisi in the quest for World Championships glory.

D’Andrea stunned her rivals lifting 137kg in the third attempt to claim the first Paralympic gold for Brazil in the sport.

Overall, the Brazilian athlete had a great performance from start to finish in the women’s up to 73kg category. She lifted 130kg and 133kg in her first two attempts and was sitting in second place behind China’s Xu Lili before the final lift.

With a silver medal already in the bag, D’Andrea provided another upset in the last round and lifted 137kg putting pressure on the two-time World Championships medallist and Rio 2016 silver medallist.

Lili cracked under pressure and was unable to lift 138kg, the weight that would give her the taste of Paralympic glory.

After revealing that she prepared for six years to win Paralympic gold, D’Andrea soaked in the feeling of becoming the first Brazilian ever to win a Para powerlifting gold at the Paralympics.

“I feel a lot of emotion and a lot of gratitude in becoming the first-ever Brazilian powerlifting Paralympic gold medallist,” D’Andrea said.

When you win your first Paralympic medal which is also your country first #gold  in #ParaPowerlifting!

Five years ago, competing at her first Paralympic Games in Rio de Janeiro, Brazilian athlete failed to register a successful lift. She used that experience in the build-up to Tokyo 2020.

“At that time it was still at the beginning of my career, but that result motivated me to try harder. It made it clear for me what my object and what my dream was, and that was good for me.”

Being only 23-years-old, D’Andrea has more Para powerlifting plans to achieve in the coming years.

“I will continue training hard because I want to win gold again in Paris 2024.”

D’Andrea took up the sport at the age of 16. She was noticed by coach Valdecir Lopes while training at the gym and two years later she was already participating in the Rio 2016 Paralympics.

Although she did not manage to get a successful lift in the competition, D’Andrea used Rio experience and made a Para powerlifting name for herself in 2017.

After another competition without a successful lift at the Mexico City 2017 World Para Powerlifting Championships, D’Andrea won a silver medal in the same place at the Junior Worlds.

Success continued to pour for D’Andrea who won her first Parapan American Games title at Lima 2019. The gold medal came just a month and a half after a fourth-place performance at the Nur-Sultan 2019 World Para Powerlifting Championships.

She also helped Brazil to finish second in the Team Mixed event at Nur-Sultan 2019.

Before coming to Tokyo and climbing onto the first step of the Paralympic podium, the 23-year-old Brazilian won the Tbilisi World Cup in May. That experience will be useful when she returns to the Georgian capital in less than 10 days.

New America's record ✅
Gold medal 🥇✅
Three-for-three in #Tblisi2021 ✅
What a day for Mariana D'Andrea 🇧🇷
Watch as she lifts 135kg and puts herself on top of the race for a spot in #Tokyo2020.#WorldCup #Tbilisi2021 #ParaPowerlifting @Paralympics @cpboficial pic.twitter.com/8Sg4myZMM3

D’Andrea will take on the centre stage at the Tbilisi 2021 World Championships on Thursday, 2 December, the fifth day of competition in the Georgian capital.

The women’s up to 73kg category is scheduled as the first competition on day five starting at 10:55 (local time).

China’s Lili Xu will be D’Andrea’s main rival in Tbilisi as the two-time Paralympics silver medallist and a world champion from Mexico City 2017 in the women’s up to 79kg category.

France’s Souhad Ghazouani will also be among the contenders for a gold medal as the four-time World Championships medallist and a five-time Paralympics medal winner.

Egyptian Amal Mahmoud, the two-time Paralympics silver medallist, and Turkey’s Sibel Cam, a silver medallist at Nur-Sultan 2019 Worlds, round up the exciting women’s up to 73kg category.