Despite the COVID-19 pandemic having halted Latvia’s progress in developing a Para ice hockey national team and all training sessions and camps, the country’s Para ice hockey federation is eager to keep pushing the envelope again starting in September.

The squad now plans to return to the ice next month to make up for lost time.

“This half year of nothing has been a little bit disturbing, but we’ll deal with it. We hope to restore our training sessions in September,” said Mareks Matisons, the Secretary General of Latvia’s Para Ice Hockey Federation.

“The goal is unchanged for us — it’s the 2026 Paralympic Winter Games and the road toward ensuring the Latvian team is there.”

Earlier this month, World Para Ice Hockey published its Strategic Plan through 2022, with one of its three main goals focusing on development and attracting new athletes to the sport. Latvia being one of those target countries.

“I’m really happy that World Para Ice Hockey has developed new steps for its Strategic Plan,” Matisons said. “It has given me emotional support to see that development is a priority.”

Two years ago, the federation in Latvia was a recipient of a grant from the IPC’s Agitos Foundation to facilitate the growth of the sport there.

Athletes from the country were also invited to take part in a regional development camp in October 2018 in Yerevan, Armenia, where they took part in five on-ice sessions and several educational seminars about equipment, classification, rules and development.

Since then, Latvia has been able to acquire eight sledges for its program — seven standard sledges and one goaltender sledge.

However, the interest to partake in the sport there has now surpassed the number of its sledges, with Paralympian from other sports even interested in transferring their skills to the ice.

In practices at the beginning of this year, Matisons said players had to share the sledges and switch in and out in the middle of training sessions since there were more athletes than sledges. It is a good problem to have, considering the sparked interest in the sport.

A silver lining from the pandemic is that the federation in Latvia has unused funding from this season which it can carry over to the 2020-2021 season to purchase a couple of additional sledges.

The program is also planning to be part of “White Friday” in Latvia in November, which is a day when charity and non-governmental organisations urge the population to donate to them and raise awareness for the good they are doing in the community.

Lastly, the federation hopes to continue its momentum on the public relations side after being introduced during the intermission of one of the Latvian national team’s able-bodied hockey games to 7,500 spectators. 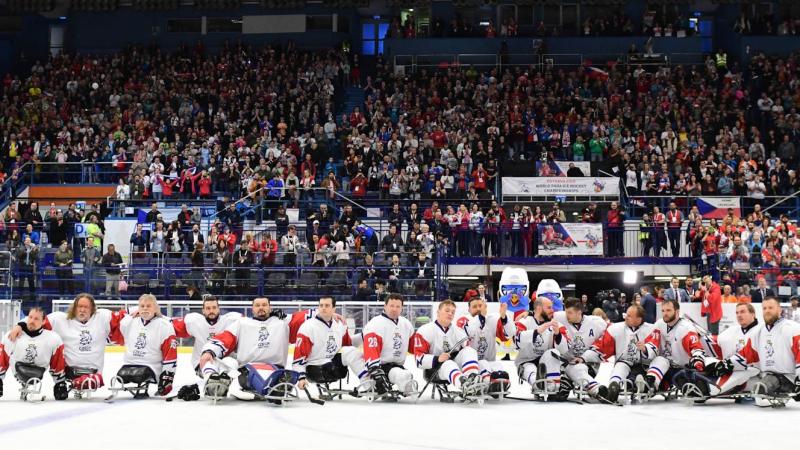