Gold Coast 2018: Hollie Arnold on top of the world 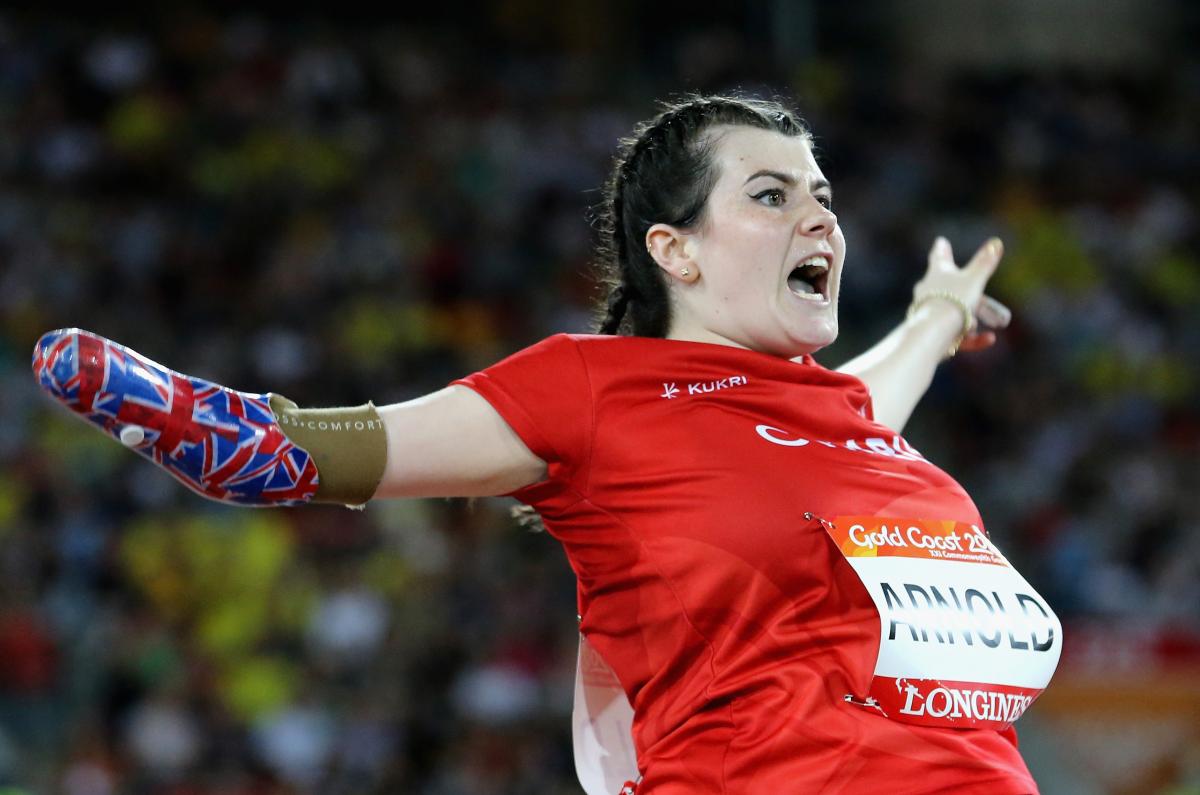 Welsh Para athlete Hollie Arnold smashed the world record with her final round throw to add Commonwealth javelin F46 gold to her world and Paralympic titles on Monday (9 April) in Australia’s Gold Coast.

Arnold showed her class with her last attempt of the competition at a packed Carrara Stadium, throwing a massive 44.43m under pressure after her great rival, Kiwi Holly Robinson, broke the previous world record in the first round with a superb 43.32m effort.

But the Grimsby-born thrower, whose first major championships was the 2008 Beijing Games when she was only 14, held her nerve and produced her best just when it was needed.

"On that last one, I told myself, 'I can take this'. I just focused on me. I've never screamed so loud. I'm so happy. It's been a rough few months for me so I'm just so happy to be Commonwealth champion."

Arnold’s winning mark was 1.41m further than her best throw at last year’s World Championships in London, Great Britain – where she also broke the world record.

In fact, the 23-year-old has a history of performing when it matters – she also smashed the previous world record to take gold in the final round at Rio 2016.

The home crowds also had plenty to cheer about as Evan O’Hanlon rounded off his Para athletics career with victory in the men’s 100m T38.

The 29-year-old reigning world champion never looked in doubt as he crossed the line in 11.09 seconds to add the one title missing from his illustrious career.

O’Hanlon had planned to retire after Rio 2016, but a rare defeat there – and the prospect of a home Games – led him to postpone that decision for a further 18 months.

The battle for silver and bronze took place between two South Africans, and it was Dyan Buis who came through for second place (11.33) although he was pushed all the way by his teammate Charl du Toit, who ran superbly to smash the T37 world record and claim bronze.

Back out in the field, Trinidad and Tobago’s javelin and shot put F44 world champion Akeem Stewart managed a best of 19.10m to finish an impressive ninth overall in the able-bodied final of the men’s shot put, which was won by New Zealander Tomas Walsh (21.41m).

“I forgot how amazing it is to push in front of a big, boisterous Aussie crowd. Mate, it’s like I’m pushing in front of 10,000 Fearnleys,” he said afterwards.

The Para athletics competition continues on Tuesday (10 April) with the men’s and women’s 1500m T54 finals.

Swimming
Gold Coast 2018: Triple triumph for Australia in the pool