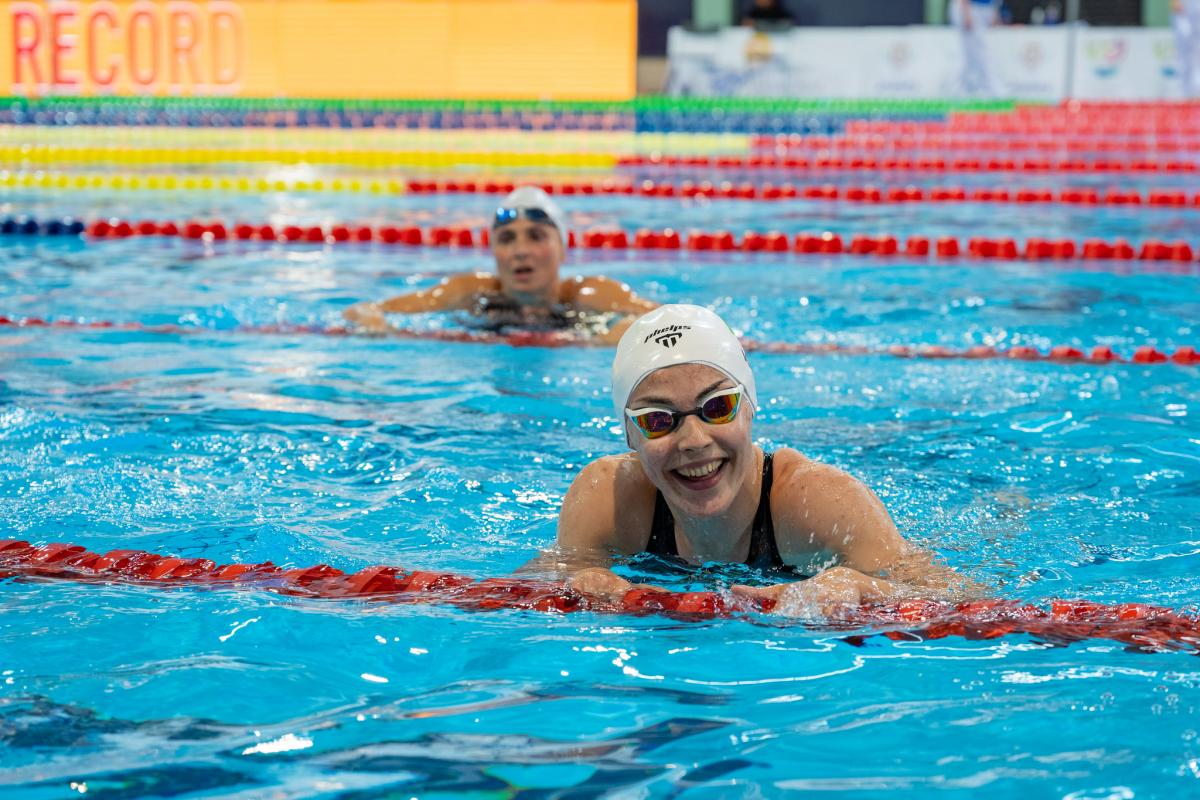 There were jubilant scenes as Portugal’s Susana Veiga delivered the host nation’s first ever gold medal and smashed the European record on the final day of the Madeira 2020 European Open Para Swimming Championships on Saturday (22 May).

The hosts had waited a week at the Penteada Olympic Swimming Pools Complex for the home favourite’s 50 freestyle S9 race and the result could not have been sweeter.

It was the climax to a dramatic last day which also saw Italy overtake Ukraine at the top of the European Open Championship medals table after the Italian relay team beat the rivals and set a world record in the final race of the competition.

“To be honest, I can’t express how am I feeling right now. I broke the European record from Sarai Gascon who is such an amazing swimmer, and I also did it here in Madeira,” said an emotional Veiga, who was congratulated by the athletes in the race.

“We are rivals inside of the pool, but we all have the same feelings, and we respect each other. It’s amazing to see the reaction of support from other athletes,” the Portuguese added.

Veiga went out fast in the race and held on to the lead beating European record holder Spain’s Sarai Gascon into second place in 28.85 and her compatriot Nuria Marques Soto was third.

There were no spectators due to COVID-19 restrictions but that did not dampen the excitement in the complex as her teammates cheered from the stands as she powered to the wall first. It was Portugal’s first gold medal in the six editions of the Europeans.

When you win a gold medal at home!!! 😍💙 Susana Veiga 🇵🇹 grabs her first gold 🥇 at the Euros in the women’s 50m freestyle S9!

There was high drama at the top end of the table when Italy overtook Ukraine on the last race of the competition in the men’s 4x100m freestyle relay 34pts.

The Italian team beat off a challenge from the Ukrainians and lowered their own world record set at London 2019 World Championships as Simone Barlaam swam very fast in the last leg to hit the wall in 3:46.06. The Russians took bronze.

There were 20 medals up for grabs on the final day. Ukraine was ahead of Italy in the overall European Open Championships medals standings after a stunning penultimate day where the team won nine golds. But it was Italy which stepped up on Saturday with eight victories to Ukraine’s three.

The Italian team was still one gold behind before the final two relay races. First, they won the women’s 4x100m freestyle 34pts with Hungary second and Spain third. Then Barlaam, Stefano Raimondi, Antonio Fantin and Federico Morlacchi grabbed the victory in the closing event.

Madeira 2020 was an Open Championships, which included athletes from outside Europe preparing for the Tokyo Paralympic Games in August. In the medals table for only European athletes, the results were Ukraine first with Italy in second and Russia third.

Italy takes back the top of the medals table by winning the men’s 4x100 freestyle 34 points in a WORLD RECORD STYLE!!!

Krypak makes it six out of six

Ukraine’s Maksym Krypak ended his phenomenal week with his sixth gold medal. He beat Italy’s Stefano Raimondo into second place for the sixth time in the 100m backstroke S10.

“I am very happy because these are the best results I could have achieved in Madeira,” he said. On his biggest rival Raimondi, he added: “He is always behind me. I didn’t see him in this race. He was really close, but I had a great final from start to finish.”

There was also a sixth gold medal for Belarus’s Ihar Boki in the 200m individual medley SM13. In another stunning victory of the week, he led from the front and hit the wall four seconds ahead of France’s Alex Portal who battled with Ukraine’s Oleksii Virchenko into third.

At the beginning of the week, Bandeira had been an unknown quantity but he quickly lit up the S14 class with his powerful displays, particularly over the last 50m of his races.

“I have won six gold medals, but I was going for the world record today. I came close to it in the training, but I was tired and couldn’t do it,” he said as he looks to Tokyo 2020. “I want to fight for medals there. It is my dream. These results that I achieved, give me confidence going forward.”

“That was really hard, my legs are really in pain right now. But it makes it so much easier when you have such great rivals. Each of them is my good friend outside of the pool and they make me enjoy this experience even more,” Applegate said.

Her teammate Eleanor Robinson got off to a great start to claim victory in the 50m butterfly S6. Close behind was Ireland's Nicole Turner, who took her fourth medal of the event, in silver.

Eleanor Robinson 🇬🇧 🥇 and Nicole Turner 🇮🇪 🥈 celebrate their medals in the women’s 50m butterfly S6 at the Euros!

Hungary also had a great finish to an outstanding week. Bianka Pap took her fourth title on day seven in the 100m backstroke S10.

“I am really happy. It has given me so much confidence going forward, especially because we are in the Paralympic year. I am looking forward to Tokyo.”

Russia’s Andrei Kalina also celebrated his win in the men’s 100m backstroke SB8. “It is wonderful to be a winner. I am proud of what I achieved in Madeira. The Paralympic story is wonderful, and I am happy to be part of it and to see it growing.”

His teammate Viktoriia Ischiulova won her fourth gold in the 100m breaststroke SB8 while Andrei Granichika triumphed in the men’s 50m butterfly S6.

The world’s best will return to Madeira next year for the 2022 World Para Swimming Championships from 12 to 18 June.

Full results of the European Para Swimming Open Championships can be found on the Madeira 2020 page.

You can watch the highlights of all seven days of competition on World Para Swimming website. 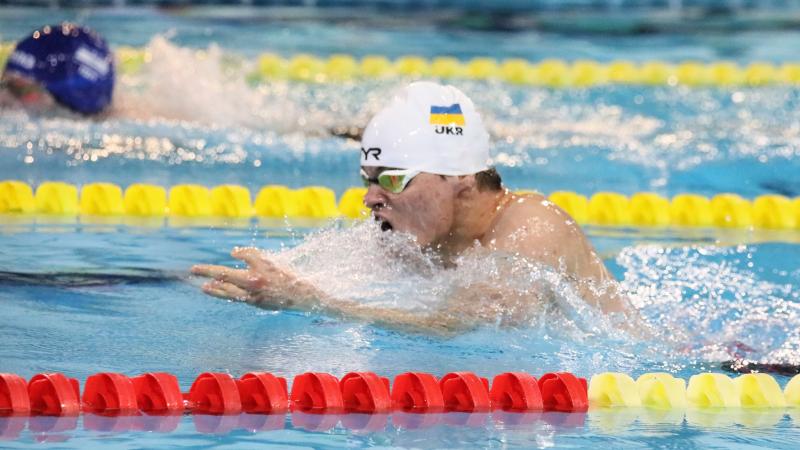 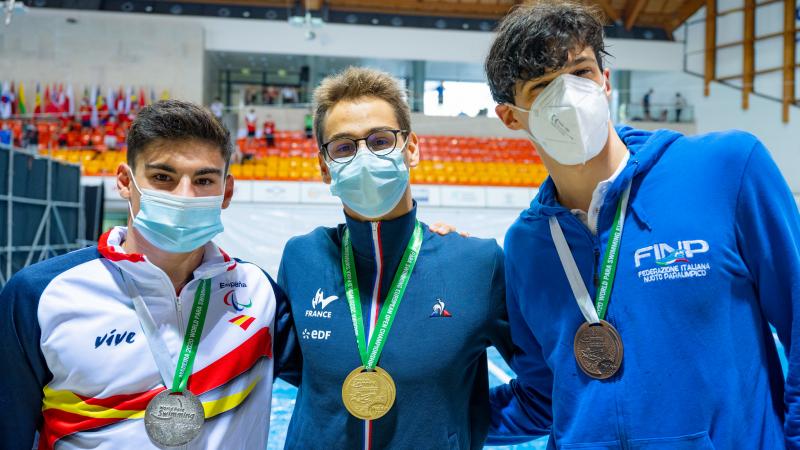 Madeira 2020
Belarus brilliance on opening day at the Euros