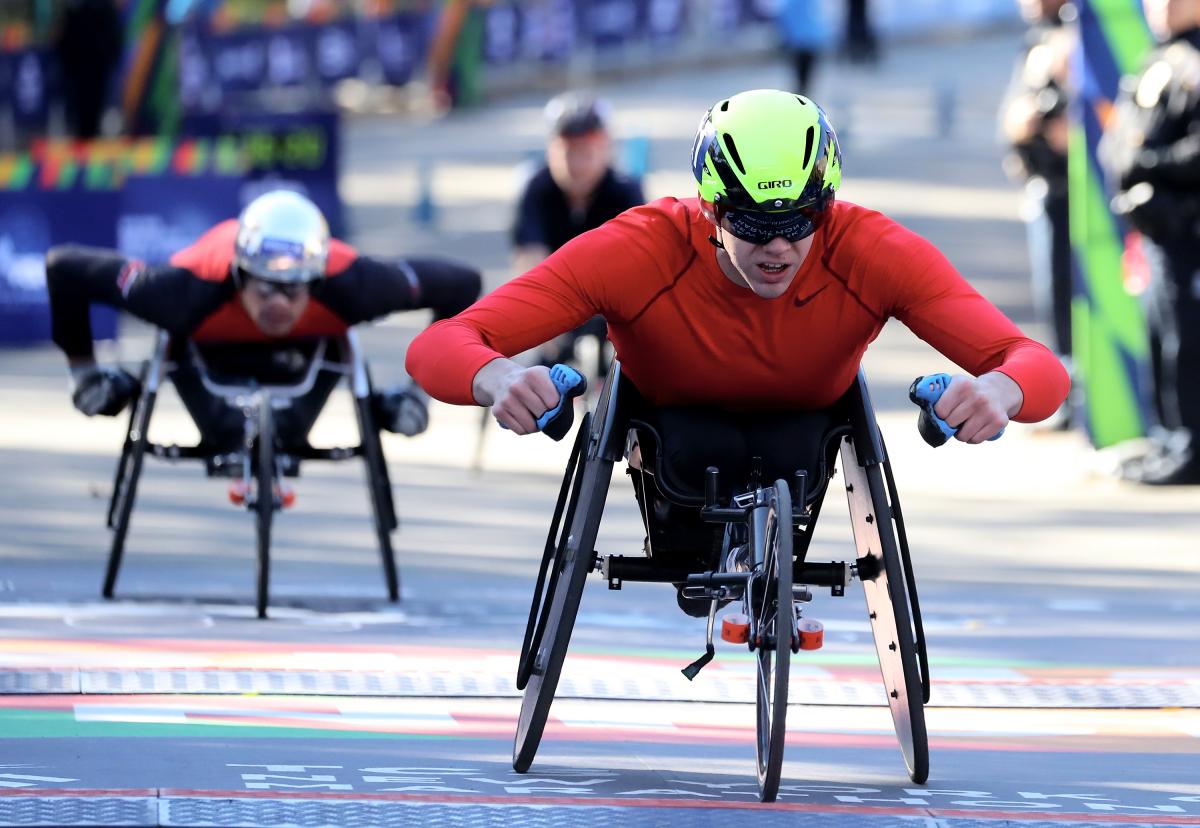 Daniel Romanchuk made history at the Boston Marathon on Monday, becoming the youngest winner to claim victory on the streets of the US city.

Victory in the women’s wheelchair division went to Swiss Manuela Schaer with a dominant performance which saw her out in front alone for much of the 26.2-mile course.

Romanchuk, who claimed his first major podium place when he finished third in Boston twelve months ago, had started the race under damp skies as part of a pack of racers which included Paralympic champion Marcel Hug, South Africa’s 10-time winner Ernst van Dyk and fellow American Aaron Pike.

But all that changed not long after the half-way point when the Illinois-based racer, coached by Adam Bleakney, claimed the eight bonus points available in the Abbott World Marathon Majors series then began to pull further and further ahead of his rivals.

By the end it was all about the American as he powered on alone to take the win ahead of Japan’s Masazumi Soejima (1:24:30) and Hug (1:26:42), who finished second and third respectively.

“I planned to put in a surge at halfway, I didn’t know what to expect from it and it ended up breaking the pack up,” said Romanchuk, who also won in Chicago and New York last year.

“I knew it was possible, it was a matter of everything coming together. Glory to God for the opportunity to race.”

Romanchuk’s win means he extends his lead at the top of the Abbott WMM Series XII and now has 116 points with Hug in second place on 90 points.

As for Switzerland’s Manuela Schaer, her stronghold at the top of women’s wheelchair marathon shows no sign of slowing down as she claimed her fifth consecutive major marathon win since finishing first in Berlin ,Germany, last September, at the start of Series XII.

The 34-year-old, who set a new course record when she won in Boston two years ago, was quickly clear of her rivals and raced much of the 26.2-mile course alone, passing through the half way mark with no one else in sight - other than some of her male counterparts, who she passed on her way to finishing in 1:34:19.

“I felt so much better than last year,” said Schaer, who was unable to finish the race in 2018 after suffering in the cold, wet conditions.

“It feels so great to be back. I’ve had my best and my worst experience here and I’m really happy that it was the way it was today.”

Schaer also picked up the eight bonus points available in the World Marathon Majors series and has an unassailable lead at the top of the leaderboard with just the London and Berlin Marathons to go before Series XII ends.