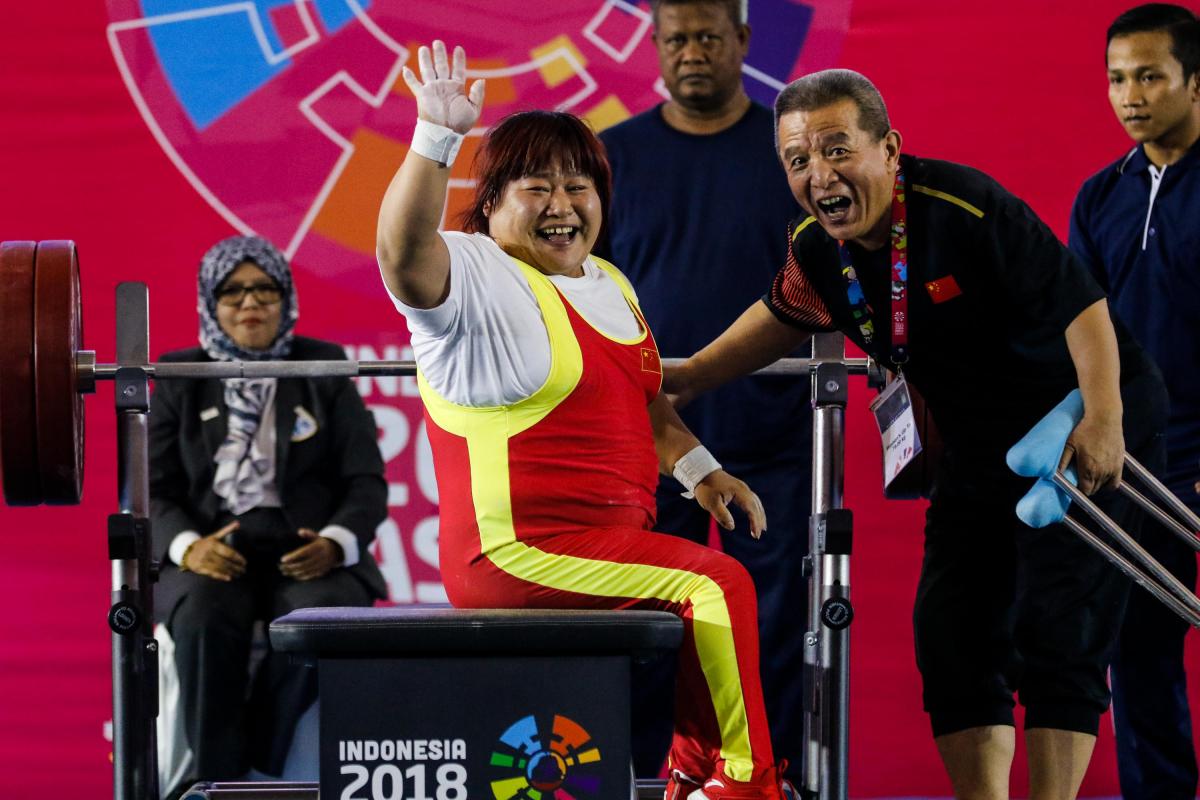 Xu Lili starred for China at the powerlifting, breaking the women's up to 79kg world record on her way to gold at Indonesia 2018

China have passed the 100 gold medals mark at the Indonesia 2018 Asian Para Games, having collected 105 of them by the end of Wednesday (10 October) in Jakarta.

Strong performances in Para athletics and Para swimming helped them notch their golden century, meaning they have won nearly a third of all gold medals on offer and stand clear atop the overall medal tally with 197 - 102 medals more than nearest challengers, South Korea.

Four world records were also set; the first coming in athletics when Jordan’s Hindi Ahmad set a world record in the men’s shot put F34 with a throw of 12.07.

Chinese Para powerlifter Lili Xu had earlier set a world record when she lifted 140kg on her final attempt to win gold and break the record in the women’s up to 79kg event. She then improved her new mark on her fourth lift, lifting the bar even further to 141kg.

In the pool it was a second world record of the Games for Uzbekistan’s Amilova Fotimakhon when she broke her own women’s 100m breaststroke SB13 by nearly three seconds in a time of 1:09:57.

The first medals of the day were awarded in Boccia and it was South Korea and Thailand who shared the spoils between them with two gold medals each. The South Korean and Thai teams then took all the finals spots in the Individual BC1, BC2 and BC3 events, with the exception of the Individual BC4 event where China’s Lin Ximei took gold from Thailand’s Somsanik Ritthikrai in a score of 5-1.

Eleven gold medals were decided at the table tennis and it was Thailand which won the lion’s share with five. Indonesia was not far behind on three.

Two gold medals were contested in the shooting and in the R3 (mixed 10m air rifle prone SH1) China’s Chao Dong set an Asian Games Record by winning gold with a score of 252.2.

In the R4 (mixed 10m air rifle standing), it was South Korea’s Lee Jiseok who took the top spot.

At the Gelora Bung Karno Stadium, Japan registered an impressive one-two finish in the men’s 100m T44/T62/T64, won by Shunsuke Itani ahead of Keita Sato.

Both Itani and Sato were highly sought after in the media mixed zones after the race and silver-medallist Sato said it was pleasing to see so much interest in Indonesia 2018.

“It’s very good for Tokyo 2020 because before no media came to Asian Para Games from Japan so, now in Japan many people will know about the Paralympic Games.”

It was also a big day for archer Harvinder Singh, who continued India’s strong Games by beating world champion Zhao Lixue in the final of the men’s recurve open W2.

Thursday (11 October) is set to be another huge day in Jakarta, with among other things the women’s wheelchair basketball gold medal match between China and Japan, and both the men’s and women’s sitting volleyball gold medals on the line.