From Tokyo to Tbilisi: Folashade Oluwafemiayo 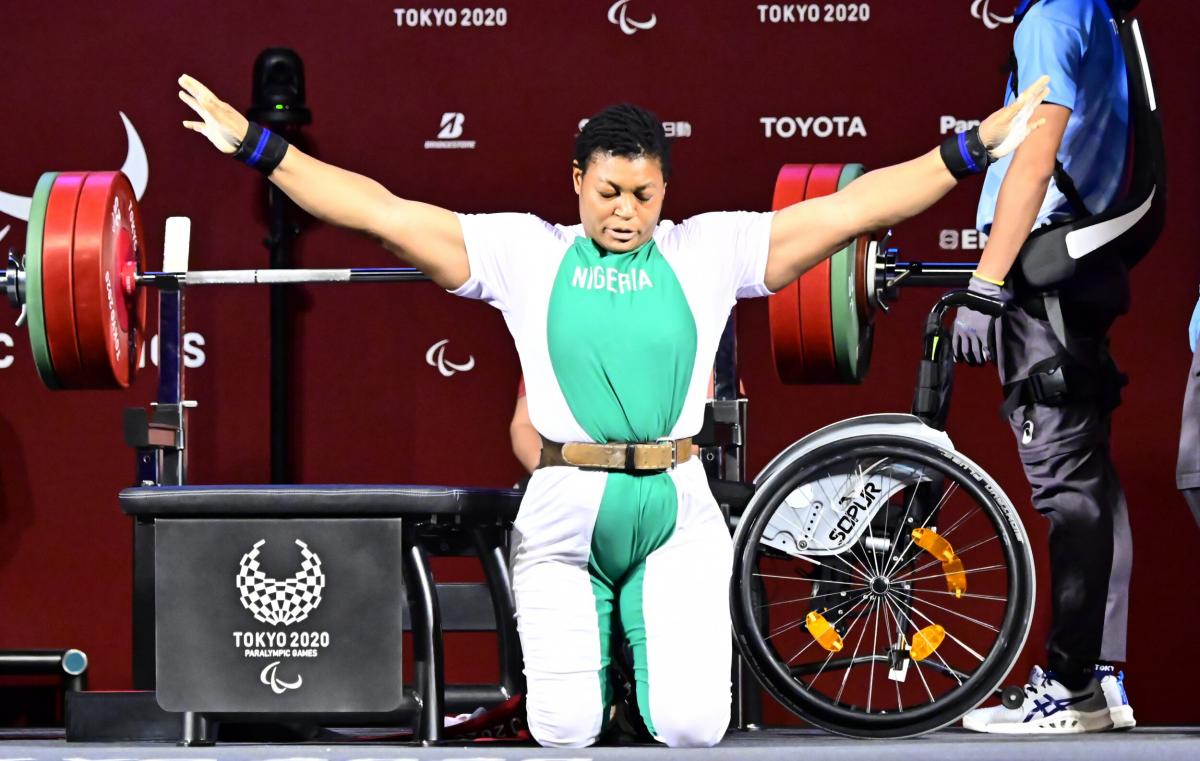 The world's best Para powerlifters are heading to Georgia this week for the Tbilisi 2021 World Para Powerlifting Championships. Among them, one Nigerian who is the ninth and penultimate athlete to be featured in the From Tokyo to Tbilisi series.

Paralympic champion Folashade Oluwafemiayo will be chasing her third consecutive world title during the competition that takes in the Hualing Ballroom of the Hotels & Preference Hualing Tbilisi from Saturday, 27 November, until 6 December.

The 36-year-old Nigerian hero won her first Paralympic title in the last day of competition at the Tokyo International Forum breaking a world record twice in the women’s up to 86kg category.

Oluwafemiayo lifted 147kg and 149kg in her first two attempts to secure the gold medal before setting the bar at 151kg in her third and final attempt.

After successfully lifting 151kg and breaking her world record set at the Manchester World Cup in March, Oluwafemiayo did not stop and requested a fourth and final ‘power lift’ to improve her own mark with 152kg.

Winning by the power of God

Nigerian athlete celebrated the victory in an emotional way, throwing herself on the floor with her arms spread in relief.

“I feel on top of the world, proud of my nation, and proud of my family,” said Oluwafemiayo who has already broken the world record three times in 2021.

🇳🇬 Nigeria, your #gold medal-winning, world record-breaking #ParaPowerlifting sensation has a message for you...

“When I saw that they [judges] gave me the card and said my [third] lift was successful, I said I want to push forward, I want to prove myself.”

Oluwafemiayo said she had a special help throughout the competition in Tokyo.

“I thank God because it was God all this way. Not by my own power, but by the power of God. He was giving me grace. And I give him the admiration for standing right behind me. I’ve been asking for this from God, and he gave it to me,” concluded the newly-crowned Paralympic champion.

Oluwafemiayo stepped onto the international stage in 2011 winning the World Cup in Dubai. Her first major international medal came in the same year at the International Wheelchair and Amputee Sports Federation (IWAS) World Games in Sharjah, also in the United Arab Emirates.

In her first Paralympic appearance at London 2012, Oluwafemiayo took home a silver medal.

After a two-year ban for an anti-doping rule violation, the Nigerian athlete made her international comeback at the Mexico City 2017 World Championships winning the gold medal.

It was just the start of an amazing streak for the athlete born in Jos, Central Nigeria. In 2018 Oluwafemiayo won her first African Championships title in Algiers, Algeria followed by another world title at Nur-Sultan 2019.

Oluwafemiayo started 2021 in style breaking the world record at the Manchester World Cup with a 150,5kg-lift in the women’s up to 86kg category. It was her fifth overall World Cup win.

After triumphing in Tokyo, Oluwafemiayo started to prepare for her second-successive world title defence in Tbilisi and another world record-breaking attempt.

Oluwafemiayo will take the centre stage at the Tbilisi 2021 Worlds on Friday, 3 December.

The women’s up to 86kg category is scheduled as the first competition on day five of the World Para Powerlifting Senior Championships starting at 11:25 (local time).

Other names to watch out for in the women’s up to 86kg event are Egypt’s Amany Ali, Jordan’s Tharwat Alhajjaj, both Rio 2016 medallists; and Lee Young-sun of South Korea, who is the Indonesia 2018 Asian Para Games silver medallist.