The collection of medals - which are 92.5mm in diameter and 9.42mm in width – use the Korean Hangeul alphabet to engrave the consonants of “PyeongChang 2018 Paralympic Winter Games’ around the edge.

The alphabet dates back to the 15th century and the word Hangeul combines the archaic Korean word ‘Han’, which means ‘great’, and ‘Geul’ which means ‘script’. Hangeul is a very symbolic piece of Korean culture and history, and is still the official writing system used throughout the country today. 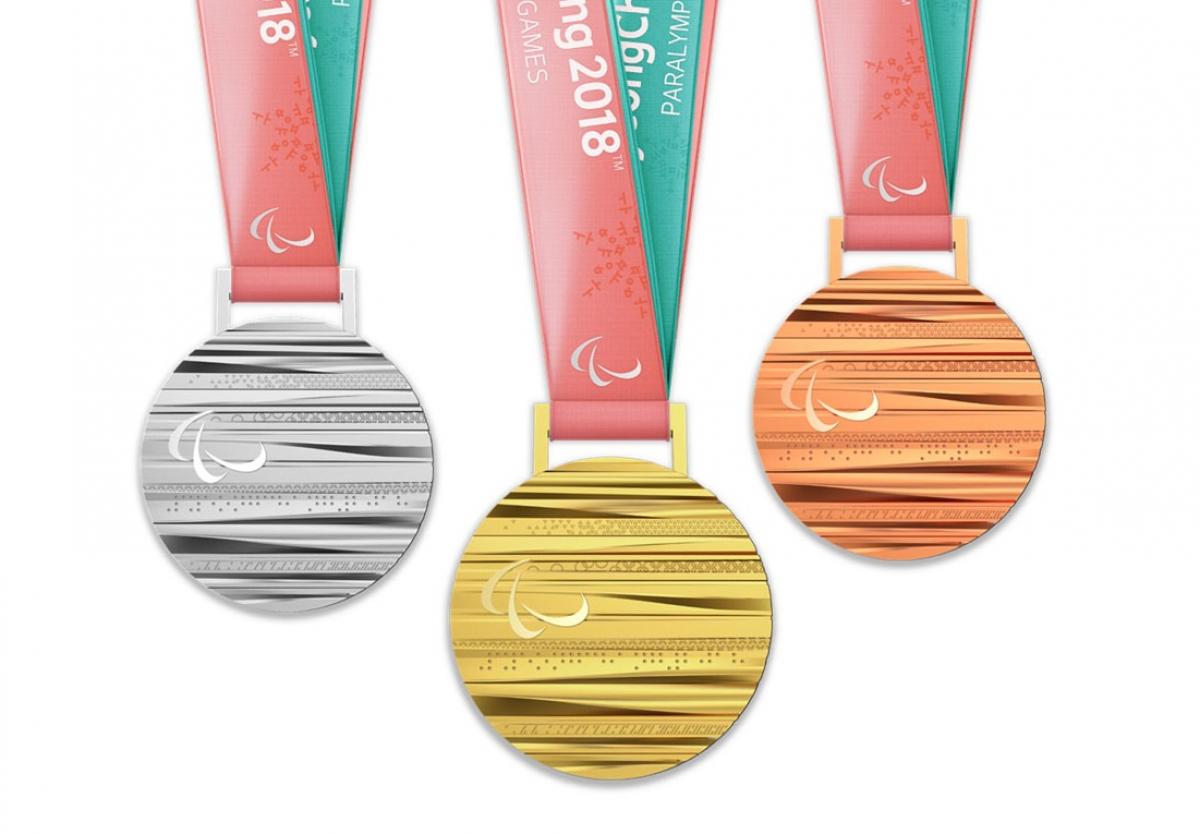 The medals for the PyeongChang 2018 Paralympic Winter Games
ⒸPOCOG

Traditional patterns including clouds, mountains, wind and wood that symbolize the beautiful nature of PyeongChang and Gangwon Province are engraved on the obverse.

The Paralympic symbol of three agitos appears on the front side of the medal; and the Paralympic Winter Games logo, along with the name of the specific sport feature on the back. On both sides you can see horizontal lines that represent the Paralympic values of equality, and on the back there is also brail, which reads “PyeongChang 2018”.

The ribbon from which the medal hangs is an equally important part of the design. It has been created using the traditional Gapsa textile of Korea, which is light and translucent and is used to make the traditional dress known as the hanbok. The light teal and light red ribbon - colours regularly used when making the hanbok - is embroidered with a delicate snowflake pattern.

The case created in which to keep the medals symbolises Korea's traditional beauty of curved lines and shapes. It gives the feel of Korean aesthetics using simple but elegant lines that can be seen in the eaves of 'hanok', Korea's traditional housing.

A symbol of equality

PyeongChang 2018 Games Ambassador and Korean Para Ice Hockey athlete JUNG Seung-hwan said, “I really love the design of the medals. I am sure that all the athletes during the Games in March will be very proud and honoured to wear this unique design around their neck. My team will certainly be doing all we can to put ourselves in contention to receive one.”

LEE Hee-beom, President of PyeongChang 2018 Organising Committee added, “The Paralympic Winter Games medals for PyeongChang 2018 are a symbol of equality, creativity, culture and passion. The work that has gone into the design and manufacturing of the medals has been world class and we are all looking forward to the moment that the first medal will be awarded to the world’s best Paralympic athletes.”

Designer Lee has a long list of awards and accolades to his name including one of the Top 10 design concept consultants in the 2015 Red Dot Design Awards and was also selected as the next-generation leader of Korea by Forbes in 2013.

He said, “After years of work - and a few months of having to keep the design top-secret - I am very happy with the reception they have been given so far, and I hope the athletes that step onto the podium to receive them are just as happy!”

A total of 133 sets of Paralympic Winter Games medals were awarded from 9-18 March across six sports and 80 events.